Travels In Spain – Wives at Church and Men on Street Corners 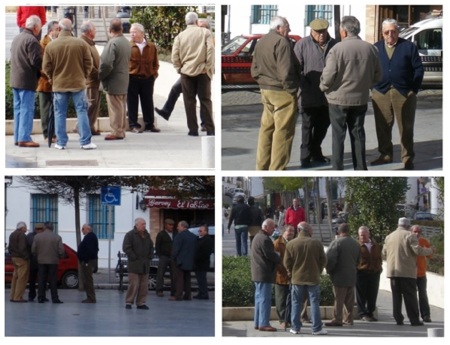 “…anyone that knows Spain will be aware of the frequency of the marriage in which the wife is deeply pious and the husband is irreligious. This is indeed a fairly normal situation. The man’s sense of self-esteem conflicts sharply with the teachings of the Church, especially in the sexual field, while he is irritated by its many small, fussy rules and regulations, which treat him, he feels, as though he were a child.” – Gerald Brennan – ‘South From Granada‘

There seemed to be strange goings on in the main town square because it was full of men just standing around and chatting in groups of ten or so and making an enormous din as they competed with each other to be heard about the great political issues of the day or yesterday’s football results perhaps.

Mostly elderly men because just as Gerald Brennan explained “…almost every Spanish peasant becomes wise when he passes fifty.” This was obviously a Sunday morning ritual while wives attended Church and the street corners and the public squares were overflowing with men all in animated conversation waiting for the service to end. Brennan also explains that – “At bottom the husband almost always approves of his wife’s devoutness, is aware that he is only playing truant and that, after a lifetime shrugging his shoulders at the Church, he will return to it in time to receive its last sacraments.”

Kim, Sue and Christine do their best to compete with the men… 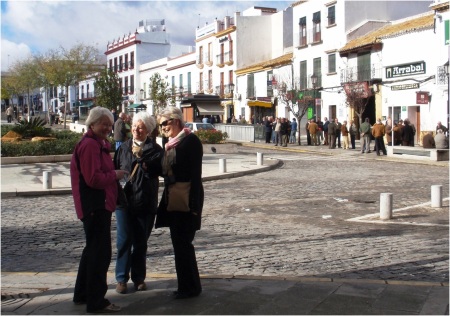