On This Day – Crossing The Green Line in Cyprus

This is quite recent, the last time I travelled to Europe before the pandemic locked us down. In February 2020 I qualified for my State Pension and I spent the first month’s payment on a trip to Cyprus. On the 28th February I visited the capital city of Nicosia.

One of the places that I was determined to visit in Cyprus was the capital Nicosia. I thought I might hire a car and drive there but I changed my mind when I saw daily coach trips advertised as a much cheaper option. With an eye for a bargain I signed up for the tour.

What a mistake that turned out to be. One of the first to be picked up we spent a tedious hour driving around Paphos collecting up everyone else. Why they can’t have one or two convenient pick up points is a mystery to me but I suppose being picked up at the hotel is a selling point.

Eventually however we hit the highway and were on our way. The coach had an informative guide who entertained us with a commentary about the history of Cyprus which came to the story of the Turkish invasion and the current partition of the island into Greek South and Turkish North. 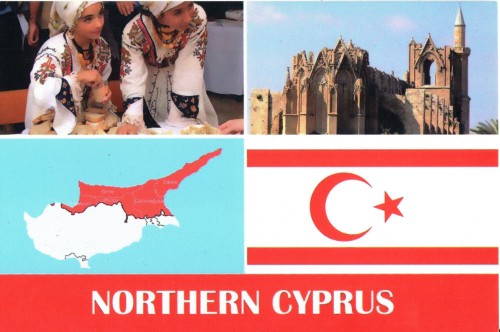 I wanted to see Nicosia because only recently I had visited a previously divided city – Berlin. It is said that Nicosia is the only remaining divided city in Europe but I am not certain that this is true because I recalled visiting Belfast in Northern Ireland which has a massive wall dividing Catholics and Protestants, Unionists and Nationalists and the gates are closed every night to keep people apart.

Belfast and that is what I call a wall… We arrived in Nicosia about mid morning and I was immediately disappointed. I am not sure what I was expecting but this wasn’t it.

It is a grubby sort of place, grey, boxy and falling apart and in need of a lot of attention, an awful lot of attention. Anything worth seeing is neglected and deteriorating. A bit like Coventry. In 2017 Paphos was awarded European Capital of Culture status and I wondered why not the capital city, ten minutes into Nicosia and I understood exactly why.

We made straight away for the border where we needed passports to cross to the Turkish side. Not so long ago it was said that if anyone visited Northern Cyprus and had their passport stamped then they would not be allowed to visit the South or anywhere in Greece ever again or at least until getting their passport renewed. I don’t think this is the case anymore but I was relieved when they didn’t stamp the passport because later today I rather wanted to return to Paphos without too much fuss and bother.

Kim at the border crossing…

Stepping over the border there was an immediate change of culture which was impossible to miss. It was like moving into a different time zone. From modern Europe we passed into Asia with minarets, souks and bazaars, a constant call to Muslim prayers and a completely different atmosphere. The border is called the Green Line and this is because green is a neutral colour, not the blue of Greece or the red of Turkey. That is how sensitive people are about the partition issue. I understood straight away why the Cyprus problem is so difficult to resolve.

The Green Line is rather like the London Underground District (Green) Line that separates north London from the South, keeping apart the red of Arsenal from the blue of Chelsea. 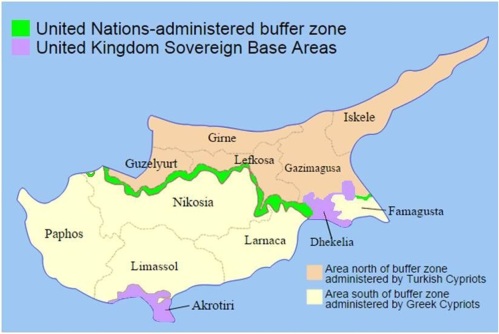 An example. The city map that we had been given in the south had no street details for North Nicosia. We got hopelessly lost and I showed the map to some local people who claimed complete ignorance about their city geography and refused to help. I think it may have been because the Greek Cypriot map referred to it as an area under Turkish occupation.

Not very smart of me to show it to them and expect any sort of assistance because they are a bit touchy about their status. The postcard at the top should have given me a clue – no recognition of Southern Cyprus at all.

We groped our way back to the border and stopped for lunch before crossing. It seemed to me that most people in northern Nicosia were not especially happy people.