On this Day – Puerta de Don Fadrique in Spain

As we wait for good news about travel opportunities I continue to look back.  On 22nd April 2018 I was in Andalusia in the South of Spain… 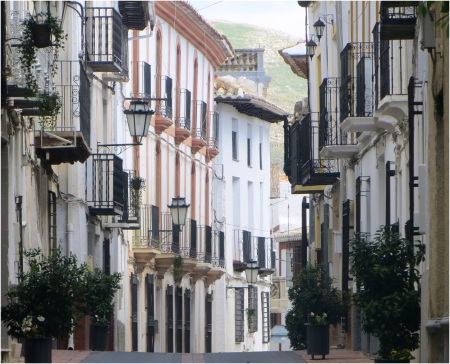 The sun was shining when we left the Spanish east coast town of Rojales just south of Alicante in the Province of Murcia.  It is close to sea level so it didn’t occur to me to take a rain coat or even a pullover in the event that it might later turn cooler as we drove inland and into the mountains.

We were in Spain and the sun always shines in Spain – doesn’t it?

We were driving inland towards Andalusia on the way to the city of Granada and just a few miles after we left the clouds began to build and the temperature began to drop. Kim worried about this and concerned for my welfare asked if I needed to stop and put on something warm. I shivered but didn’t own up to not packing anything that might usefully be described as warm so this wasn’t an option. She pulled a cardigan out of her bag and wrapped it around her shoulders. My sister, Lindsay did the same.  I had no cardigan.  I tried to look brave.

Shortly after bypassing the city of Murcia there was some promising improvement and we took a planned detour through the Province of the same name towards Andalusia and towards the town of Puerta de Don Fadrique which is a small village that makes the extravagant claim to be the prettiest in all of Spain.

The approach to Puebla de Don Fadrique was indeed stunning set against the backdrop of the Sagra mountain range and we continued to climb to three and a half thousand feet before eventually arriving in the town.  As we parked the car I couldn’t help noticing that everyone was wearing pullovers and coats.  By necessity (not having a pullover or a coat) I declared it warm enough to walk around in shirt sleeves!

It was time for refreshment but the first café was closed and so was the second and then the third.  The whole place was completely desolate as though there had been a nuclear accident and the place had been abandoned in a dreadful hurry.  Maybe everyone was just cold and staying indoors. 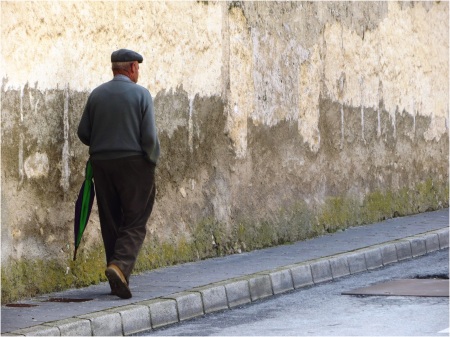 Everywhere was shuttered and closed which led me to speculate that maybe Puebla de Don Fadrique was suffering from a collective hangover from a Festival the day before, which is usually just my luck,  or maybe it just doesn’t open on a Monday.

It was a pretty little place for sure, whitewashed houses and black metal grills in the Andalusian style but without people it lacked any sort of vibrancy or interest, no bars, no restaurants and no shops.

We walked through the streets half in anticipation and half in disappointment and made our way back to the car and suddenly there was signs of life as a group of men in coats and pullovers were sitting at a street corner debating the big issues of the day and at the end of a street about a hundred yards away we finally spotted a bar that was open.

So we made our way towards it, alarmed the owner by sitting down and ordering a coffee and then slightly bemused by all this left and drove out of the village and resumed our journey towards Granada.

As we drove further west the weather continued to rapidly deteriorate.  Ahead of us we could just about make out the Sierra Nevada Mountains, at eleven and a half thousand feet the highest in Spain and the third highest in Europe after the Caucasus and the Alps.  But the storm clouds were gathering, the sky turned black and it started to rain.  The temperature sank like a stone and I began to plan my first task in Granada, – to find a shop to buy a coat.  I wasn’t especially looking forward to that because I am not what you would call an enthusiastic shopper.  I might have mentioned that before. 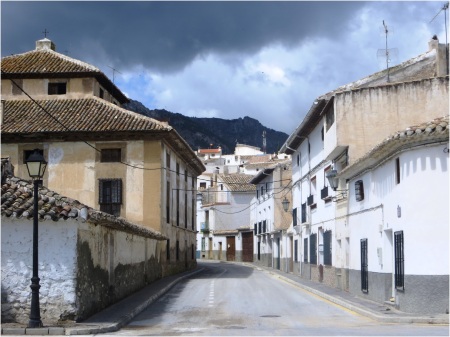