It has to be said that this was a really odd place. It seems that wherever coaches stop in Ireland an unusual ensemble of strange people and entertainers beam down from out of space and put out a collection tin.

In this windy remote place the oddest of all was a sort of farmer chap who looked as though he hadn’t washed his hands or combed his hair for several years who sat on two battered sofa cushions and invited people to have their photograph taken with a litter of kittens barely old enough to be away from their mother and then some lambs who looked to me to be highly sedated. I think the chap was highly sedated as well, probably on Guinness!

But he actually seemed positively normal next to the man a badly out of tune accordion and kicking a piece of metal plate in some sort of unholy row that I can only imagine was designed to scare witches away.

Now I suffer from a real fear of dogs and a paranoia of being mauled to a canine death and normally a threat like that would turn by backbone to jelly. The British Geological Survey Team in Edinburgh measures earthquake activity in the UK and has been known to sometimes get confused by the seismic activity created by my violent shaking when faced by a dog and has even issued a false earthquake event alert.

On this occasion however I didn’t think I had a lot to fear from an obviously shagged out old collie that was wearing a flat cap tied to its head and whose best people attacking days were a long way behind it. The poor thing could hardly stand up let alone chase anyone that it was set upon so I gave another cheery wave and dawdled defiantly back to the car. I was supremely confident that I could make the five metres to the door faster than it could cover the fifty metres or so to get to me.

Back in the car I suddenly worried that this might be the time that the engine would blow up and I might be in a spot of bother after all but thankfully it fired into life and I deliberately drove slowly past him and gave him a another cheeky wave as he continued to make his pointless threat – “I’ll set the dog on yer, I’ll set the dog on yer”. What was it going to do – bite the tyres?

Anyway, there was no warning light on the dashboard about geriatric dog attacks so we just laughed and carried on to the exit. 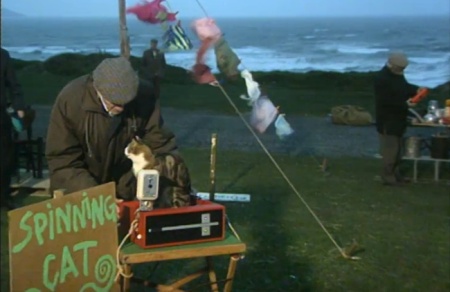 17 responses to “One Word Challenge – Point”