Entrance Tickets, The Fortress at Castelsardo in Sardinia 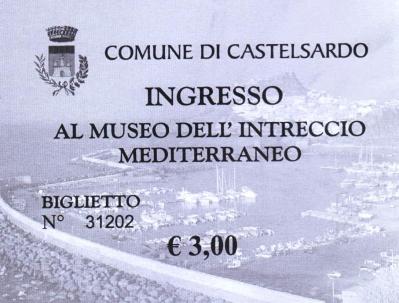 “(Sardinia) reminds me of Malta: lost between Europe and Africa and belonging to nowhere. Belonging to nowhere, never having belonged to anywhere.  To Spain and the Arabs and the Phoenicians most.  But as if it had never really had a fate.  Left outside of time and history.” D H Lawrence – ‘Sea and Sardinia’

After lunch we made our way towards the old town and the fortress set at the very top of the rocky outcrop.  At the lower levels there were souvenir shops selling usual tourist trash and after ignoring these we tackled slippery steep stone steps worn down by the passage of time and feet.

At the top we paid our 3€ entrance fee and passed through the gates into the recently restored castle and centro storico where waiting for us at the top there was a breath-taking 360° panorama of the land and the sea. 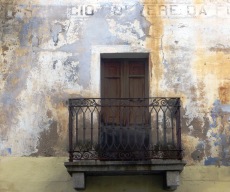 Admission to the once mighty fortress was free (which is always a bonus) so we climbed to the top and enjoyed views of Vesuvius on one side and the waterfront of Naples on the other.  On the down side we had to pay to go inside the Museum.  Let me say however , no one should miss visiting Naples, it was once part of the Grand Tour of Europe and surely it should be again.  Just my opinion. 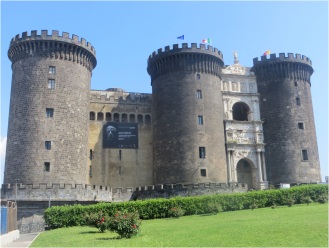 Travels in Portugal, Across the Alentejo to Beja 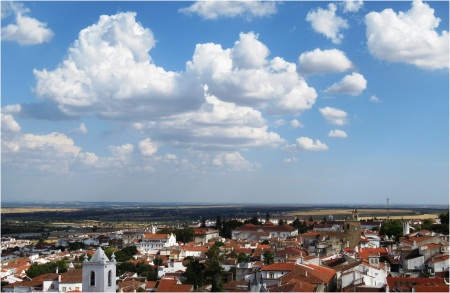 After three excellent days on the south-west coast of Portugal we were rather sad to leave before setting off inland so after we had settled the bill and driven away we first of all headed north towards the smart seaside resort of Vila Nova de Milfontes where we stayed for just about an hour or so before reluctantly setting off east.

After a short while we stopped for coffee in the delightful village of Cercal where they were preparing for a festival, a tomato festival as it happened, which was to take place next weekend.  The region is famous for tomatoes as it happens and this was another narrowly missed party.

Now we were in the Alentejo Region and soon we were in an Iberian wilderness with miles and miles of open countryside and barely any inhabitation.  One of the poorest, least-developed, least-populated regions in Western Europe, the Alentejo has been dubbed both the Provence and the Tuscany of Portugal. Neither I would say is entirely accurate, it is more subtle and nowhere near as busy as the poster regions of Italy and France and the charms of this land are made up of wheat fields, cork oak forests, wildflower meadows and tiny white-washed villages and absolutely no ‘A’ list celebrity villas..

First we drove through endless miles of cork oak plantations, bark stripped trees with vivid orange scars and without any sign of human activity and then the cork gave way to olive groves.  It is an interesting fact that olive trees only grow well in the Mediterranean region (there are some attempts to grow in the Americas and the Far East but these are not especially successful) and Portugal is one of the leading producers (Spain is the World’s largest producer with annually over five million tonnes).  Interestingly (or not) I have an olive tree in my garden in England which continues to grow quite vigorously but sadly without fruit.

After the olives then the grapevines twisting away like Chubby Checker until giving way further east to open countryside where fields of golden stubble stretched out forever all around us as far as the eye could see until they finally met the yonder big sky.  Long straight roads took us between towns and villages and for a time through the mess of marble quarries where spoil heaps decorated the countryside in an unsightly sprawl.  This area of Portugal is the second largest source of marble in Europe after Carrera in Italy.

This is what it looks like inside a deep mine marble quarry.  I didn’t take this picture of course…

We arrived in the city of Beja just as the siesta was beginning and doors and shutters were closing tight as we walked through deserted streets searching for our hotel we eventually came upon it and it turned out to be a delightful family run place in the middle of the busy city.

We liked it, we only had one night in Beja and we were already regretting that it wasn’t two so with only limited time to look around the place we set off immediately onto the street. In mid afternoon the temperature was rising and there was a stifling heat so we weren’t surprised to learn that Beja is statistically the hottest place in all of Portugal.  Later that day someone told me that if it was 40° in Lisbon then it would be 45° in Beja.  Thankfully it wasn’t quite that hot today. 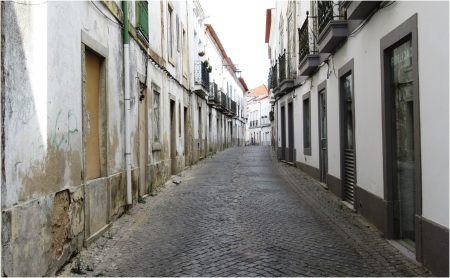 Away from the modern city shopping centre Beja was a delightful place with a labyrinth of old streets with flaking wooden doors and rusting iron balconies, it is a place of classic elegance even though it perhaps gives the appearance of being slightly past its best.

The walk took us past Roman excavations and remaining parts of the medieval city walls with detours into churches and museums and an interesting art gallery but all the time we were making our way to the highest point in the city and to the tallest castle in Portugal.  There were one hundred and fifty steps to climb to the top of the granite and marble tower but that didn’t bother us, last year in Bologna in Italy we climbed five hundred to the top of the Asinelli Tower and two hundred and fifty at Milan Cathedral.  It was a climb well worth making because from the top there were massive views in all directions across the Alentejo plains. 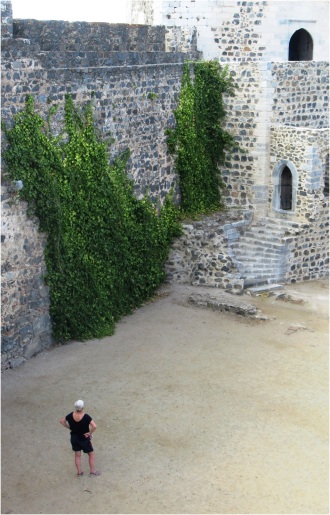 A town like Beja is a real find, not really on the tourist trail so booking an overnight stay in a place like this can be a bit of a gamble but this one really paid out.  From the castle we explored more streets as we began to look for somewhere suitable for evening meal later.  We found what we were looking for close to the hotel, a simple sort of place with plastic menus and good Portuguese food so we had no hesitation in returning there later.

Kim ordered beef ribs and I had pork with clams which seems to be a popular combination in Portugal.  We had walked seven miles today.

We should have stayed an extra night and spent more time in Beja but the next morning we had to leave soon after breakfast because we were driving to our next destination, the town of Estremoz. 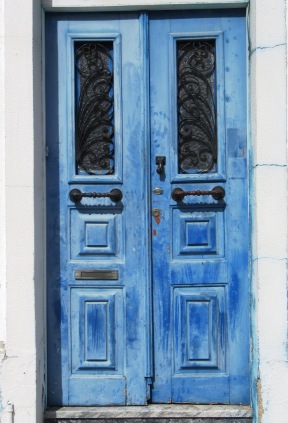 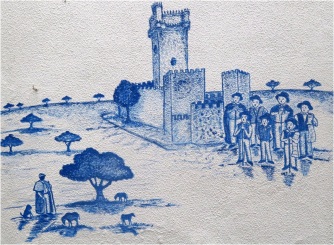 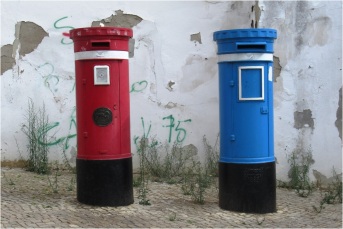 We debated this before lights out and I suggested seven o’clock and Kim said six which I said was too early, so we agreed on seven and Kim set the alarm for six! 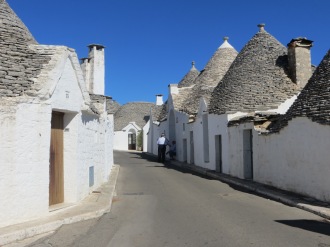 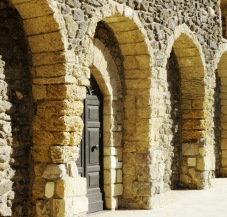 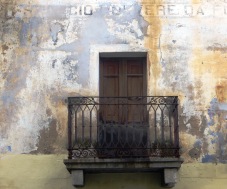 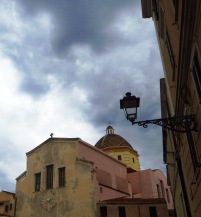 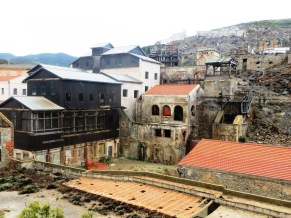 Have Bag, Will Travel
Create a free website or blog at WordPress.com.