Continuing my short series on Top Tips for Morocco. number two is the Royal Palaces…

Wandering aimlessly around the maze of streets in Marrakech we were looking for the Saadian Tombs which the guidebook said shouldn’t be missed but could be difficult to find.

First of all we discovered that it was completely right on the second point and after we had walked around the outside of the Kasbah Mosque we missed the entrance and took an unnecessary detour into some back streets and lanes which took us nowhere in particular.

After all the walking we were feeling hungry now so while we consulted the guide book maps we found a café with pavement tables and had a bottle of water (a bottle of water!) and a chicken kebab snack that was cooked on a grill on the pavement which tasted good even though it was complimented by exhaust fumes and the smell of horse manure from a carriage parked up close by.

The helpful waiter showed us on the map where we would find the tombs so after we had finished eating we paid up, left an appropriate tip and moved on. 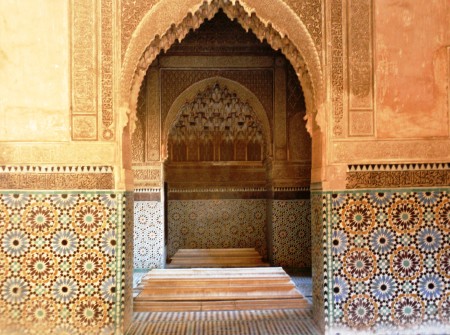 The reason that we missed the site was that the entrance is squeezed in between the back of the Mosque and a narrow row of kiosks and having found it we paid our ten dirham entrance fee and walked through a very narrow alley in between two tall buildings where there was barely room to pass the visitors that were coming out.

It turns out that the Saadian Tombs were sealed up in the sixteenth century by a jealous ruler, Moulay Ismail, who resented the wealth of his predecessor, Ahmed al Mansour, and who set about dismantling anything he had built or acquired.  So successfully was it hidden away that it wasn’t rediscovered until the 1920’s when an inquisitive French administrator overcome with curiosity opened up the entrance and found this treasure hidden away from public view half in ruins and completely forgotten.  It would be nice to think that there may still be treasures like this just hidden away somewhere but I suppose with modern mapping techniques like Google Earth this is most unlikely.

There has been a lot of restoration at the site and the two main mausoleums have been returned to their original state when they were built five hundred years ago to contain Mansour’s own tomb.  The graves of over a hundred Saadian princes and royal household members are scattered around the garden and the courtyard most with gravestones brilliantly tiled and elaborately inscribed.

It was only a small site and it didn’t take long to complete the visit even though we had to compete with several large tour groups to see everything there was to see. 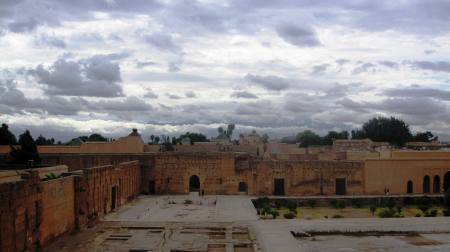 The site that we were heading for next was the Badii Palace and for such a big place the entrance was once again tucked into a narrow lane which we only found after asking several times for directions.  Asking direction in Marrakech always carries the potential issue of being offered an unwanted chaperone and guide and a refusal often leads to misinformation so this turned out to be a lengthy process.

The Palace is in ruins now but reputedly took armies of labourers and craftsmen twenty-five years to build and when it was completed it was said to be amongst the most magnificent palaces ever constructed with walls and ceilings encrusted with gold and precious jewels and in the middle a massive pool with an island flanked by four sunken gardens.

Sadly the magnificent building survived for barely a hundred years before the Saadian dynasty was overthrown and replaced by the Alouites and the conquering Sultan, Moulay Ismail, came along and stripped the place bare at just about the same time as he was sealing up the Saadian Tombs.

Moulay Ismaïl was by all accounts an interesting character and  a man of extreme excesses.  It is said that he personally killed over twenty-five thousand men but to make up for this he is alleged to have fathered eight hundred and eighty-nine children. This is widely considered the record number of offspring for any man throughout history that can actually be verified.  It is estimated that to father that number of children (allowing for failed attempts of course) he would have had to have sex with an average of 1.2 women every day for sixty years which is something that I can only imagine was a real chore!

When he wasn’t slaughtering or shagging he was building himself a new capital city at Meknès in the north of Morocco and it took twelve years to dismantle the Badii Palace and remove the treasures and relocate them and all that is left now are the stripped red mud bricks. 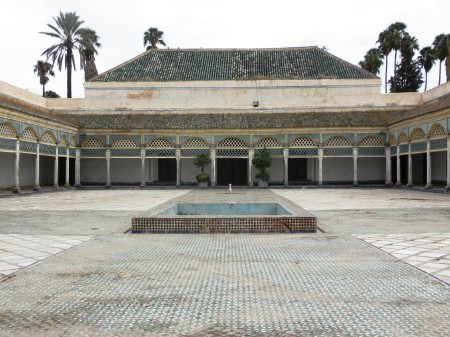 We wanted to see the replacement Palace and that took us to the city of Meknès.  Being unexpectedly allowed into this place we walked through a series of courts and chambers decorated in bright yellow tiles and spiralling stucco work. Behind the courts is the sanctuary that holds the remains of Moulay Ismail and his family members and after we had taken off our shoes at the door we were invited into the mausoleum but not the Mosque.

After the mausoleum visit we went next to the Heri es Souani, the site of Moulay Ismail’s stables. We paid the reasonable entrance fee and were allocated a guide.  He asked if we understood French or English, we told him English and he looked at us with a face that said ‘That’s a shame because I do this tour in French’ and he set off regardless on his Gallic commentary to our appropriately blank faces.

He took us through a remarkable system of high-vaulted chambers with a series of storerooms and granaries.   In the time of Moulay Ismail, these were used to hold provisions in a case of a drought or a siege and behind these chambers were the stables for seven-thousand horses.  That’s an awful lot of horses and an awful lot of equine shit to shovel so there were living quarters over the top for the hundreds of grooms and labourers that would have been required to support an operation such as this.

At the completion of the tour the guide said goodbye but rather like a barnacle attached to a rock stayed close by.  We set to walk off but then suddenly he seemed to remember that he could speak a bit of English after all, he coughed an attract attention sort of cough, held out his hand and asked if we had forgotten something.  We had of course and we rifled our pockets for some loose change to give the man his deserved tip.

Anyway, don’t just take my word for it, I recommend that you pop across to visit this post for another accompanied tour – nareszcieurlop.wordpress.com