What A Difference Thirty Years Can Make (1) 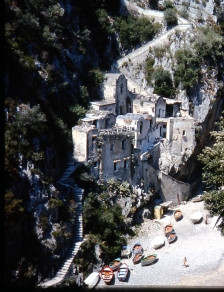 … the village of Vallone di Furore, a narrow fjord where steep rock walls sheltered an enclave of fishermen’s houses and a tiny harbour with a beach littered with small hard working fishing boats all resting for the day.  I had seen this place before and thirty years later it was completely transformed.  In 1976 it was a shambles with dilapidated buildings but now it was renovated and restored but had kept its charm intact.

Have you ever returned somewhere years later and found it greatly changed?

Occasionally, some of your visitors may see an advertisement here

On the way to Amalfi the coach stopped to admire the view of the town of Positano that clings improbably to a vertical cliff with buildings tumbling chaotically from the top right down to the beach at the bottom.

Best of all, in my opinion, was the village of Vallone di Furore, where steep rock walls sheltered an enclave of abandoned and partially collapsed  fishermen’s houses and a tiny harbour with a beach littered with small hard working fishing boats all resting up for the day.

Following the visit to Puglia in Southern Italy I thought it was probably time to review my performance in visiting the Country’s World Heritage Sites.

The World Heritage list has been around for over forty years as a consequence of events in 1954 when the government of Egypt announced that it was to build the Aswan Dam, a project that proposed to flood a valley containing priceless treasures of ancient civilizations.  Despite opposition from Egypt and neighbouring Sudan, UNESCO launched a worldwide safeguarding campaign, over fifty countries contributed and the Abu Simbel and Philae temples were taken apart, moved to a higher location, and put back together piece by piece.  At last the World was collectively protecting its treasures.

Not surprisingly Italy is the country with the most Word Heritage Sites, it has fifty-three, seven more than Spain which has the second most sites.  I have visited half of the sites in Spain but when I reviewed the Italy list I was disappointed to find that I have been to less than a quarter and in this whole fortnight in Puglia I had added only one – the Trulli houses of Alberobello.  I was genuinely surprised to find that Lecce, the Florence of the south was missing from the list and to find it marooned on the tentative list where it has been languishing since June 2006.

Which brings me to the final two sites that I have visited, both of them for the first time in 1976 before they were even admitted to the list and which was in actual fact was  before there was any sort of list at all! WOW, I feel suddenly old.

The first of these is the Amalfi coastline and its famous death defying drive described so accurately by John Steinbeck: “Flaming like a meteor we hit the coast, a road, high, high above the blue sea, that hooked and corkscrewed on the edge of nothing, a road carefully designed to be a little narrower than two cars side by side.”

The second is a joint listing for the archaeological sites of Pompeii and Herculaneum, two towns destroyed by the eruption in 79 A.D. of the volcano Mount Vesuvius which is surprisingly not included on the list even though Mount Etna in Sicily is.

Well, eleven out of forty-nine is not a good score so it means one of two things are needed to correct this rather poor performance, either I have to spend more time in Italy in the future or UNESCO needs to hurry up and include some of the places that I have already been.  They could start with Lecce and Lucca, both on the tentative list, and also Palermo that once applied but after rejection subsequently withdrew its nomination.

Italy and Puglia, The Inevitability of Giuseppe Garibaldi

It was the last full day in Puglia and our plan was to stay at the hotel garden and swimming pool for the morning and then go sightseeing in the afternoon.  It was Monday and I guessed that the garage shop that was closed yesterday would be open today so I ventured out again onto the dangerous road and carefully negotiated the short walk and bought some wine and beer to see us through the last day and evening.

There were even fewer guests at the hotel today than there had been the day before so finding a perfect spot to sit and read presented no problem at all and we let the morning slip away in virtual solitude.

An hour or two of sitting on a sun bed doing nothing is quite long enough I find so shortly after midday we left the outdoor terrace, changed into our walking about clothes and called for a taxi.  It was cheaper than yesterday at only €13 but I still resented paying out such a huge sum as the driver dropped us off at the central train station.

Our intention now was to take the train in a westerly direction and visit the fishing port of Molfetta a few kilometres along the coast.  So far on these travels the Italian trains had been completely reliable and punctual but this time there was a fifteen minute delay and although the station address system provided some information in English I couldn’t understand a word of it as it crackled horribly through the overhead speakers.

Finally the big electric engine hummed into the station and after a few moments we were upstairs in a double-decker carriage and on our way through the untidy industrial zones of the city and out towards the coast and we arrived in Molfetta after about a thirty minute ride.

We didn’t have a map of course but we were fairly certain of the right direction towards the harbour and we confidently set off in our chosen direction and within a few moments came upon a leafy square and the inevitable statue of Italy’s great hero, Giuseppe Garibaldi who we have come across previously in (no exaggeration here) every town and city that we have visited in Italy. 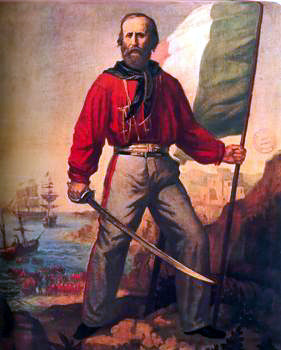 After the creation of the Kingdom of Italy in 1861 the state worked hard at making sure Garibaldi would be perpetually remembered and the number of streets, piazzas and statues named after him makes him probably the most commemorated secular figure in history.  Such was the romance of his story of revolutionary heroism and daring-do that Garibaldi was at one point possibly the most famous man in Europe.

In London in 1864 for example people flocked to see him as he got off the train. The crowds were so immense it took him six hours to travel three miles through the streets. The whole country shut down for three days while he met the great and the good.  Literary figures including the poet laureate Alfred Lord Tennyson and Sir Walter Scott lauded him as the “Italian lion” and “the noblest Roman of them all”.

Statues of his likeness stand in many Italian squares and in other countries around the world.  A bust of Giuseppe Garibaldi is prominently placed outside the entrance to the old Supreme Court Chamber in the U.S. Capitol Building in Washington, DC, a gift from members of the Italian Society of Washington. Many theatres in Sicily take their name from him and are ubiquitously named Garibaldi Theatre.

Five ships of the Italian Navy have been named after him, among which a World War II cruiser and the former flagship, the aircraft carrier Giuseppe Garibaldi.

When I went on holiday to Sorrento in 1976 I took a bus ride along the Amalfi Coast the coach stopped at one dangerously precipitous hairpin bend so that the tour guide could point out to us an outcrop of rock in the sea which is said to show the profile of the great man.

The English football team Nottingham Forest designed their home red kit after the uniform worn by Garibaldi and his men and have worn a variation of this design since being founded in 1865 and there is a Nottingham Forest team magazine called the ‘Garibaldi Gazette‘.  Rather interesting that they choose Garibaldi and not Robin Hood in my opinion.  A college in Mansfield, Nottinghamshire is also named in his honour.

The Garibaldi biscuit was named after him, as was a style of beard, a pop group in Mexico and in Italy there is a cocktail drink called the Garibaldi (based almost inevitably on the Italian drink Campari). The Giuseppe Garibaldi Trophy has been awarded annually since 2007 in the European Six Nations rugby union competition to the winner of the match between France and Italy. 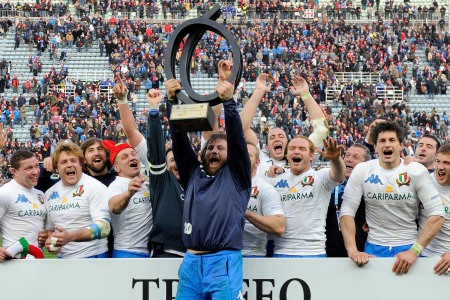 Other places and things named after Garibaldi include the Garibaldi National Park including Mount Garibaldi, Lake Garibaldi and a Volcanic belt  in British Columbia in Canada; the city of Garibaldi in Oregon, USA; a town and a gold mine near the city of Ballarat in Victoria, Australia and a town in Brazil (his wife, Anita, was Brazilian).

There are Hotels in Naples, Palermo, Venice and Milan, but only a bed and breakfast in Rome. In England there are streets and squares named after him in London, Scarborough, Grimsby, Bradford and St Albans and a hotel in Northampton.  There is a Pizzeria in Memphis, Tennessee and in the Pacific Ocean near California there is a scarlet fish and a marine reef called Garibaldi. There is a museum on Staten Island, New York; stations on the Paris metro and in Mexico City; a café in Madrid, an area in Berlin, restaurants in Vienna and Kuala Lumpur, a Street in Moscow, a Museum in Amsterdam and a block of high-rise Social Housing flats in my home town of Grimsby.

If I have missed anything important out of my list then please let me know.

I have got rather a lot of photographs of Garibaldi statues from my Italian city visits but I took some more here and then we continued our stroll to the old town and harbour.

“We were for centuries
downtrodden, derided,
because we are not one people,
because we are divided.
Let one flag, one hope
gather us all.
The hour has struck
for us to unite.”

Amalfi was a beautiful town, but the traffic was horrendous and parking is a real problem.  The coach operators have to book a slot in the main car park and there is a constant queue of vehicles waiting for their precious turn to set down their passengers.  Once through the approach tunnels and finally inside it is a lovely town with a grand cathedral and lots of sprawling back streets with interesting shops and restaurants.

The corniche provides one of scariest but most scenic motoring experiences in the world as coaches veer vertiginously around the jagged granite edges of the Lattari Mountains, twisting and tunneling and hairpin-bending, providing vista after stunning vista of gorges, bridges, cliffs plunging vertically into the glassy Thyrrenian Sea, and sudden improbable villages tucked picturesquely into the landscape.

On the next day dad finally dispensed with his tie and dropped a couple of gears down from civil servant to holidaymaker mode and first thing in the morning we had continental breakfast in the dining room.  Bread and jam for the first meal of the day was another new experience for me because I had only previously been used to having raspberry preserve at teatime but I quickly adapted and by the end of the fortnight I had become completely used to it.