It was an interesting experience to go through the hidden door behind the bookcase and to climb the steep steps into the rooms where they lived and hid.

Imagine staying hidden and quiet all day without a mobile device and the internet!

The little guide book calls it a ‘Museum with a Story’ and this sets it out against other museums that do not have the same emotional connection.

“Writing in a diary is a really strange experience for someone like me. Not only because I’ve never written anything before, but also because it seems to me that later on neither I nor anyone else will be interested in the musings of a thirteen-year old school girl. Oh well, it doesn’t matter. I feel like writing.” – Anne Frank

…. We were close to the Anne Frank House now on Prinsengracht and as this was on our ‘to do list’ we thought we might check the queue situation which the guide book warned could be quite lengthy at peak times.  Although it was mid afternoon there was no queue at all so we decided that this was an opportunity not to be missed so we paid our entrance fee and went inside.

The house was built in 1635. The canal-side frontage dates from a renovation of 1740 when the rear annex was demolished and the taller one which is rather the point of the visit now stands in its place was built. The Frank family left Germany as the Nazis established power and Otto set up his spice and pickling business in the premises.  Later Nazi persecution spread to the Netherlands and over one hundred thousand Jews were deported so the Frank family went into hiding inside the house in an annex at the rear.

The Secret Annex, as it was called in the English version of Anne Frank’s ‘The Diary of a Young Girl’ enjoyed a secluded position which made it an ideal hiding place the family and four other Jewish people seeking refuge from the authorities. They remained hidden here for two years and one month until they were anonymously betrayed to the Nazi’s, arrested, and deported to their deaths in concentration camps. Of the hidden group, only Otto Frank survived the war.

After those in hiding were arrested, the hiding place was cleared by order of the arresting officers and all the remaining contents of the Frank family and their friends were seized as Government property. Before the building was cleared two friends who had helped hide the families, returned to the hiding place and rescued some personal effects. Amongst the items they retrieved was ‘The Diary of Anne Frank’.

It was an interesting experience to go through the hidden door behind the bookcase and to climb the steep steps into the rooms where they lived and hid, the little guide book calls it a ‘Museum with a Story’ and this sets it out against other museums that do not have the same emotional connection.  It is only small of course so the visit doesn’t take too long before finishing in the inevitable book shop at the end.

I read the diary after a previous visit to Amsterdam but the problem with it of course is that even before you start to read it you know the tragic and heartbreaking end and it is also worth remembering that the Franks weren’t unique in Nazi occupied Amsterdam and across the Netherlands it is estimated that twenty thousand people sheltered Jews at considerable risk to themselves.

P&O Mini-Cruise, a Previous Visit to the Netherlands 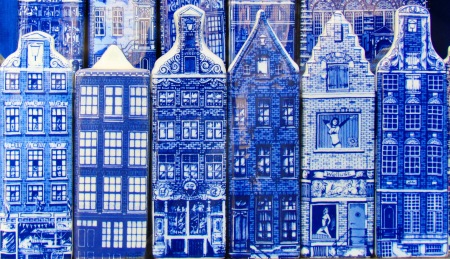 It was slow progress out of Rotterdam on account of the rush hour traffic and Jonathan soon became drowsy and dropped off to sleep and while he dozed my thoughts went back to our previous visit in a very cold February 2004.

That had been our very first Ryanair flight and on that occasion we stayed in the capital at the Hotel Amsterdam on Damrak, right in the city centre and I inappropriately introduced him to the Red light District and because of the weather and the need to be indoors we visited some of the city museums.

Tulips to Amsterdam, Canal Cruise and the Anne Frank House

The coach driver ran through a well rehearsed list of do’s and don’ts peppered with little quips – my favourite being an instruction not to stand up in the on-board toilet when taking a pee as this results in a waterlogged cubicle and then he settled down for the two hour drive to Amsterdam.

When we arrived he ran through some useful information and he had plenty of time for this because there was a huge traffic jam all along the main roads of Rokin and Damrak and progress was slow to our drop off point at the central railway station.  Before we got off the bus he reminded us that traffic drives on the right hand side of the road in the Netherlands and to be careful getting off or else instead of sightseeing in Amsterdam we would be in hospital instead.