Delos, one of the great classical archaeological sites of the Mediterranean, is a tiny island stretching only three miles north to south and barely one mile from east to west. It was here, that Apollo and his twin sister Artemis, son and daughter of Zeus and, like Delphi, is a major sanctuary dedicated to Apollo, the Titan god of gods and one of the most important in all of Ancient Greece.

It is the epicentre of the Cycladic ring and an uninhabited island six miles from its larger neighbour and is a vast archaeological site that together with Athens on the mainland and Knossos on Crete makes up the three most important archaeological sites in Greece.

I imagine that the reason we are not so aware of it is because whereas a lot of the work in Athens and Crete was undertaken by British and American archaeologists Delos is predominantly a French excavation site and we prefer to concentrate on British rather than Gallic achievements.

In 1990, UNESCO inscribed Delos on the World Heritage List, citing it as the “exceptionally extensive and rich” archaeological site which“conveys the image of a great cosmopolitan Mediterranean port”.

Delos is just a short ferry ride from Mykonos.  We left the old port on a small ferry boat where we sat on the open deck and watched Mykonos slip away behind us and the approach to tiny Delos which took about half an hour or so.  It was already hot as we stepped off the boat and paid our admission charge to the island and took the pathway into the site.

There is no set route and visitors are allowed to wander in all directions along the rough paths and the dark grey stony earth overgrown with vegetation, strewn with ancient relics, ravaged by wind which moves across the embers of a past civilization and, if you listen to the warnings of the locals, home to poisonous snakes which will attack if disturbed so keeping an eye out for this danger we set off first to Mount Kythnos, the highest point and a stiff climb where, at the top, we were rewarded with sweeping 360º views of the Cyclades and beyond.

It was a lot easier going back down and once back in the main city which was once home to thirty-thousand people (compare that with a modern population of eight thousand in Mykonos) we walked through a succession of excavated buildings, some with ancient frescoes and colourful mosaic floors, dismembered statues, altars, sanctuaries, agoras and reconstructed temples and arches.

At the centre we stopped to see the Delian lions, one of the iconic images of the Greek islands.  These were only plaster copies however because they are now kept in the island museum and one is missing because it was stolen and taken to Venice to become a symbol of that city.

Walking through the centre of the ancient city we passed the sacred lake where Apollo and Artemis were born and then to the far north of the island and the site of the ancient stadium and a view back across the water to Mykonos.

We had been continuously walking now for about three hours in the blistering sun without any shade so we made our way back to the main site and to the museum where we hoped it might be a bit cooler.  There was no chance of that and although it was light and airy inside it was oppressively hot so we rushed through the exhibits rather too quickly to do them any real justice and were soon outside again looking for refreshments.

Delos is well worth a visit but here are three bits of advice, firstly don’t miss the last boat home or else you will be stuck on the rather remote island all night long with the spirits of Ancient Greece and the snakes.  There is a superstition that no one should stay on the island overnight. Secondly don’t die on the island, no one is supposed to pass away on Delos, it is considered to be bad luck.

Finally, take plenty of water and a snack because there is only one small shop on the island attached to the museum and it is explosively expensive and bearing these two earlier bits of advice in mind we finished our tour of Delos by wandering back to the jetty and taking the early afternoon ferry back to Mykonos. 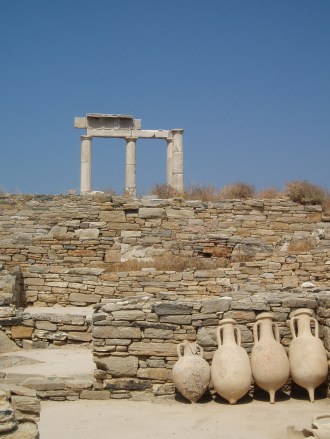