Travels in Italy, Lecce – The Florence of the South 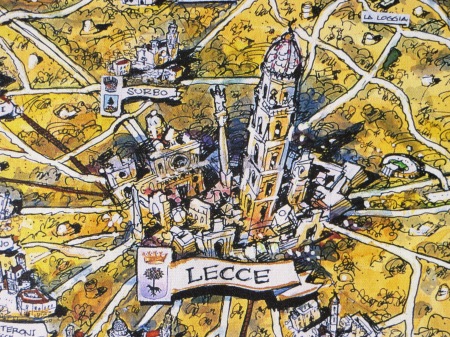 It was a hot and humid night and without an adaptor specifically designed for southern Italy hotels we couldn’t plug the anti-insect tablet machine in and to make matters worse sleeping with the windows open simply invited the mosquitoes to drop by and, as we discovered later, the problem with lying on top of the sheets with no clothes on meant that we were laid out like an all-you-can-eat buffet table for creepy-crawlies.

I don’t like all-you-can-eat buffets much myself because I invariably overload the plate and consume too much and regret it later and mosquitoes it seems have the same lack of self restraint because in the morning Kim was suffering from thirteen irritating bites.  I had only a couple and considering how many Peroni beers I had drunk the previous day I took pleasure from imagining that the little blighter that got me would most likely be suffering from a monster headache and was hanging over a mosquito toilet somewhere puking up and saying over and over, ‘never again, never again!’

The Grand Hotel Lecce offered an appropriate grand breakfast and we lingered over the first meal of the day at a table in the garden and in conversation with a member of the hotel staff who spoke excellent English on account of the fact that he had worked for a couple of years in a hotel in Bournemouth and was pleased to be able to practice his second language with us.

Our first job this morning was to buy a plug adaptor so that we could recharge the Kindle, the camera batteries and the mobile phones and this proved to be much easier than I imagined it would be.

We found the hardware store and they knew exactly what we required and within a couple of minutes we had what we needed and a spare to be able to pass on to some other English hotel guests who had the same problem and they only cost a very reasonable €2 each.  Later I suggested to the hotel staff that they should buy a few and sell them for at least twice as much and make a nice profit but perhaps I should have kept this brilliantly simple idea to myself and taken it to the Dragon’s Den.  Anyway, panic over!

So now we could relax and enjoy Lecce.  Because of its prevailing Baroque architecture Lecce is sometimes called the Florence of the South and it demonstrates that although the Renaissance left fewer calling cards in the south of Italy than in the north it didn’t completely pass the region by.  Lecce is completely unexpected and seems oddly out of place and the answer to it is the stone – a type of limestone that is soft enough to be worked easily with a chisel.

This famed material allowed the builders of sixteenth century Lecce to indulge themselves in their Baroque fantasies and so ornate is the masonry work it is difficult to gauge where architecture ends and decoration begins and everywhere we walked there were nymphs and mythical beasts, gods, warriors and heroes, animals and serpents all carved with great care but subsequently disfigured by age, weather and pollution into sometimes barely unrecognisable lumps of pitted rock.

First we went to the Piazza Doumo and the walked along the main street until we reached the main square, the site of a Roman amphitheatre, half buried now below the modern city and next to a pharmacy where, ignoring the historical aura of the city, Kim dealt with her personal priority and went inside and bought some cream to deal with her insect bites. 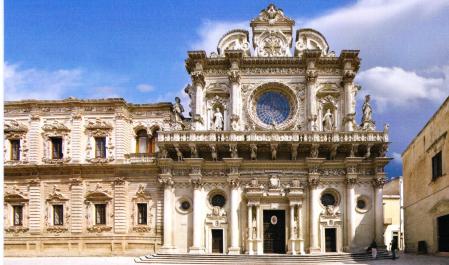 After the main square we slipped into and dissolved into the side streets and made our way to the Basilica di Sante Croce, said to be the most beautiful church in the city and it may well have been but unfortunately for us the builders were in and the front was covered in scaffolding. We went inside but, and I have to agree with Kim on this point, it wasn’t a whole lot different from any other catholic church/cathedral and once outside the door, ignoring the beggars sitting on the steps and back into the sunshine I immediately forgot all about it.

Leaving Sante Croce we returned to the main square and then passing swiftly through the main shopping streets (phew!) we arrived at the sixteenth century trapezoidal castle with free admission and some almost interesting displays about papier mache religious modelling which didn’t take very long to look around and soon we were back outside in an adjacent park and then back into the old town.

We stopped for a drink now and agreed that it might be a good idea to try and find the restaurant where we had booked a meal for eight-thirty this evening.  This was a lot easier said than done  and for those people who think that Bari is an easy place to get lost then take it from me they should visit Lecce!  Anyway, we had a lot of debate and conflicting suggestions about how to find the place but after twenty minutes or so and a lot of disagreement we found it and we declared it an honourable draw even though we were both secretly claiming a sort of Google-Earth victory.

It was about two o’clock now and not surprisingly the city started to close down all around us so we left the city by the main gate next to the Asian supermarket that probably never closes and after stopping off at a bar at a traffic junction where I picked up a couple of more mosquito bites because I had forgotten to put any repellent on we returned to the hotel and spent some time around the garden and the swimming pool.

My travels in Italy…

We were heading for the town of Trogir, which is about twenty kilometres west of Split and which is the best preserved Romanesque-Gothic complex, not only in the Adriatic, but in all of Central Europe and inevitably therefore a UNESCO World heritage site.   It was mid morning when we arrived and the town was already very busy.  The old city is built on a little island, only separated from the mainland by a few metres and with access to it over a small bridge.