As it happened, the weather was beginning to improve slightly and we returned to the hotel at about lunchtime, confident that the missing bag would surely have turned up by now! No such luck and Kim is definitely not amused any more and even I am beginning to agree that it might be my fault especially when I fail to agree that there might be something to be gained from driving to the airport to give someone a slap.

Iceland, Keflavik and the Cod Wars

It was a drive of about forty minutes from Reyjkavik to Keflavik but today the sun was shining which was in contrast to the journey that we had made in the opposite direction just a few days previously and this time we could appreciate the lava black basalt littered landscape dripping in lime green moss and decorated with yellow lichen.

To date only twelve men have walked on the moon (well, maybe, maybe not, depending on your point of view) but for those of us that haven’t I imagine that it looked rather like this (without the moss and the lichen obviously).

In Icelandic terms Keflavik is a big town, the second largest outside of the Reyjkavik conurbation but with a population of only about fourteen thousand this only really makes it a large village in UK terms so finding our accommodation at the Hotel Berg was very straight-forward.

We liked it immediately, it was friendly and welcoming, our rooms were available ahead of check-in time and they were comfortable and warm with good views over the adjacent harbour.

Our plan for the rest of the day was to visit the Blue Lagoon thermal pools but it was still quite early so we thought that before that it seemed only good manners to take a look at Keflavik and walk for a while along the seafront.

First we came across an old fishing boat that had been dragged up out of the sea and was now on permanent display safely marooned on dry land.  It was called the Baldur and visitors could go on board and walk safely on decks where men had previously risked their lives out at sea and it reminded me of the National Fishing Heritage Museum in Grimsby (my home town) and the Ross Tiger fishing trawler moored up alongside.

This made me think of the Icelandic Cod Wars!

In 1958 Britain went to war – this time with Iceland.  The First Cod War lasted from 1st September until 12th November 1958 and began in response to a new Icelandic law that tripled the Icelandic fishery zone from four nautical miles to twelve to protect its own fishing industry.

The British Government declared that their trawlers would fish under protection from Royal Navy warships in three areas, out of the Westfjords, north of Horn and to the southeast of Iceland.  All in all, twenty British trawlers, four warships and a supply vessel operated inside the newly declared zones.  This was a bad tempered little spat that involved trawler net cutting, mid ocean ramming incidents and collisions.  It was also a bit of an uneven contest because in all fifty-three British warships took part in the operations against seven Icelandic patrol vessels and a single Catalina flying boat.

Eventually Britain and Iceland came to a settlement, which stipulated that any future disagreement between the two countries in the matter of fishery zones would be sent to the International Court of Justice in The Hague and the Icelandic Minister Bjarni Benediktsson hailed the agreement as “Iceland’s biggest political victory.“ 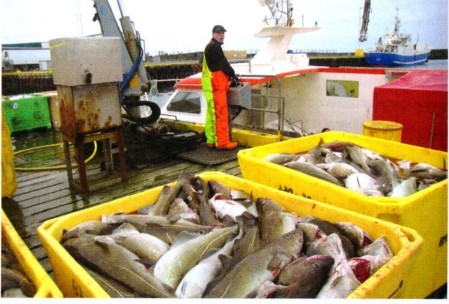 But it wasn’t the end of Cod Wars because there was a second in 1972 and a third in 1975 when on both occasions Iceland further extended their territorial fishing waters without consultation and continuing to protect these is what keeps Iceland from joining the European Union even today.

I had no idea that when I visited Iceland that I was now there as a resident of the English fishing town of Grimsby which was once recognised as the largest and busiest fishing port in the world. The wealth and population growth of the town was based on the North Sea herring fishery but this collapsed in the middle of the twentieth century and so diversified to distant water trawler fishing targeting cod in the seas around Iceland.  The concessions that Britain made to Iceland as a result of the Cod Wars which put these fishing grounds off limit destroyed the fishing industry in the town.  It is said that many men who survived the sea came home without jobs and drowned in beer.

Today Grimsby is dominated by the fish processing sector rather than the catching industry. Processors are mainly supplied by over-landed fish from other UK ports and by a harsh twist of fate containerised white fish from Iceland.

There is a National Fishing Heritage Centre in Grimsby which is a museum including a visit on board a real Grimsby Trawler – The Ross Tiger.  It’s a museum well worth visiting and the last time that I went I learnt from the guided tour that ironically Grimbarians don’t particularly care for cod anyway and have a preference for haddock which they consider to be a superior fish!

It wasn’t only Grimsby that was adversely affected by the outcome of the Cod Wars and across the Humber Estuary the fishing industry in the city of Kingston-upon-Hull  was similarly devastated by the capitulation of the UK Government and also went into dramatic and irreversible decline.

I have often wondered however what the process was for getting a twin town. Perhaps it was like the draw for the third round of the FA cup when all the names go into a hat to be drawn out with each other, or perhaps it was like the UCAS University clearing house system where towns made their preferred selections and waited for performance results to see if they were successful, perhaps it was a sort of international dating service and introductory agency or maybe it was just a nice place where the Mayor and the Town Clerk rather fancied an annual all-expenses paid trip!

After visiting the Baldur we walked along the coast where the sea was calm today but the defences in place suggested that this might be a rough place in high seas.  Keflavik translates as ‘Driftwood Bay‘  so I searched for a while and picked up some nice pieces for my driftwood boat sculptures and then we walked back to the hotel, checked out the restaurant options for later and then picked up the car and drove the twenty-minute drive to the Blue Lagoon. 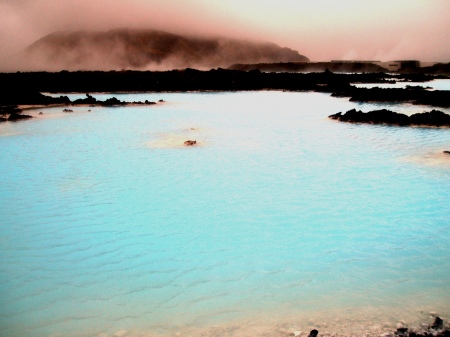 Iceland – Without a Change of Clothes 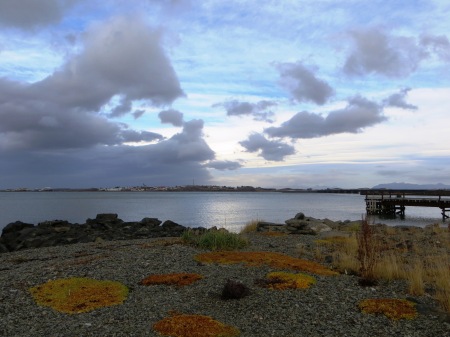 No luck with the weather and we woke to more overcast grey skies and a rather damp scene.  After breakfast we walked into the city to see the parts we had missed on the first day.  We had liked the Sólfar Suncraft so much the first time that we made for the seafront again and made a second visit before we walked further along the promenade towards the docks until finding our progress barred by road works we abandoned this route and turned instead towards the city centre.