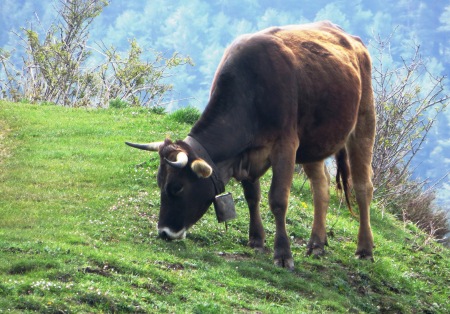 Not long after leaving Burgos and as we travelled north the landscape began to change.  Only gradually at first and then more rapidly as we approached the snow capped Cantabrian Mountains.

The endless brown prairies of Castilla y León started to slowly give way to enclosed green fields of Cantabria and now there were ridges and escarpments each one playing host to a clutch of wind turbines.  There was livestock in the fields as we began to climb, gently at first and then more dramatically into the mountains. 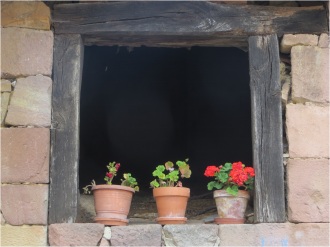 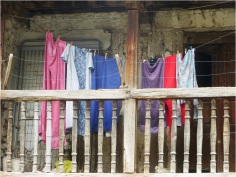 Northern Spain – The Plaza Mayor and My Updated Top Ten

Tomorrow we would be returning to the coast in Cantabria and so now we had come to end of our drive through Castilla y León and our visit to the main cities although, and I apologise for this, we had missed out Soria.

We had visited a lot of new cities and it was time now to reassess our top ten list of favourite Plaza Mayors.  The more places we visit the more difficult this becomes so I have now extended this list from five to ten and introduced two categories – cities and towns.

Northern Spain – Pilgims and the Way of Saint James 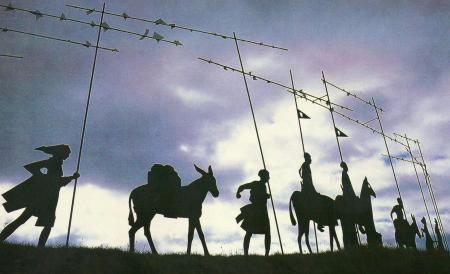 Give me my scallop shell of quiet;
My staff of faith to walk upon;
My scrip of joy, immortal diet;
My bottle of salvation;
My gown of glory (hope’s true gage);
And then I’ll take my pilgrimage.

Burgos lies on one of the principal pilgrim routes of the Camino or the Way of Saint James and during our visit we had to share the streets and the restaurants and the hotel with dozens of foot weary walkers all sharing their hiking tales as they walked towards their ultimate objective – the city of Santiago de Compostela. 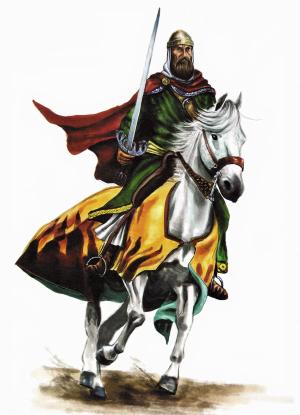 As we wandered around the streets of Burgos I was reminded constantly of the story of El Cid.

The seven hundred year period between 722 and 1492 has long been known to historians of Spain as the ‘Reconquista’ and the Spanish have organised and interpreted their medieval history around the drama of this glorious event which over time has become an established feature of the self-image of the Spanish people.

It has become embellished into a sort of organised Catholic national crusade and although there is some truth in this much of it in reality was simply due to the expansionist territorial ambitions of competing northern Spanish kingdoms such as Asturias and León.

In legend the focal point of the story of the Reconquista has been the heroic tale of Rodrigo Díaz de Bivar or El Cid, the National hero of Spain and revered by many as being single-handedly responsible for the victory of the Catholic Kingdoms over the North African Moors but whilst El Cid was undoubtedly a great warrior and soldier he was only one of many who contributed to the Crusade.

The explanation for his pre-eminence is the responsibility of Ramón Menéndez Pidal, who was the foremost Spanish historian of his age and the author of the standard biography of the Cid, first published in 1929.  Pidal gave substantial credibility to the ‘Poema de Mio Cid’, which was a work written at the height of the crusading age and, crucially, fifty years after the Cid’s death.  Then, his valiant deeds against the Muslims made him a suitable exemplar to inspire a generation of holy warriors fighting the Crusades, and his life quickly moved from reality into the realms of legend.

In the eighth century almost all of the Iberian Peninsula was conquered by hostile Muslim armies from North Africa. Only a number of areas in the mountainous north that roughly correspond to modern Asturias, Cantabria, Navarre and northern Aragon managed to resist the initial invasion and many years before El Cid this was to become the breeding ground of the Reconquista. 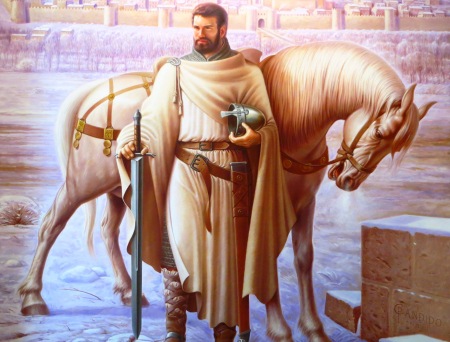 Life under Moorish occupation was rather mixed, for many it wasn’t that bad and under Islam, the status of Christians and Jews was recognised, there was great religious and social tolerance and in return for a small tax they were free to practice their own religion but for others there was persecution and intolerance and this forced the disaffected to migrate north to take refuge in the Christian Kingdoms.   Conversion to Islam proceeded at a steadily increasing pace however and by the end of the tenth century Muslims of ethnic Iberian origin are believed to have comprised the majority of the population of Andalusia.

In legend the story of El Cid and the reconquest has acquired a rather simple plot of Christian Spain against Muslim Moors but throughout this period the situation in Iberia was much more  complicated.  As well as fighting against each other Christian and Muslim rulers commonly fought amongst themselves, the Berbers of North Africa, who had provided the bulk of the invading armies, clashed with the fundamentalist Arab leadership from the Middle East and to further complicate matters interfaith alliances were not unusual.  The fighting along the Christian Muslim frontier was punctuated by prolonged periods of peace and truces and distorting the situation even further were the legions of mercenaries who frequently switched sides and fought for cash.

El Cid lived at this confusing time and he too at various times had Muslim allies and at other times worked for Muslim paymasters against Christians because he was, in short, a warrior for hire, a mercenary, who spent much of his career fighting for whoever paid him the most.

In popular culture the reconquest has been raised to the status of a crusade and the expulsion of the Moors as liberation from an occupying army but again this is not strictly the case.  At this time Córdoba became the largest, richest and most sophisticated city in Western Europe.  Mediterranean trade and cultural exchange flourished.  Muslims imported a rich intellectual tradition from the Middle East and North Africa and Muslim and Jewish scholars played an important part in reviving and expanding classical Greek learning in Western Europe.

The indigenous cultures interacted with Muslim and Jewish cultures in complex ways, thus giving the region a distinctive culture.  Outside the cities, the land ownership system from Roman times remained largely intact as Muslim leaders rarely dispossessed landowners, and the introduction of new crops and techniques led to an improvement and expansion of agriculture.

However, by the eleventh century, Muslim lands had fractured into squabbling rival kingdoms and this encouraged the northern Christian kingdoms to expand southwards with the opportunity to greatly enlarge their territories and consolidate their positions.

As early as 739 Muslim forces were driven from Asturias and a little later Frankish forces established Christian counties south of the Pyrenees and these areas were to develop into the Kingdoms of Navarre, Aragon and Catalonia.  The Kingdoms pushed south and the capture of Toledo in 1085 was soon followed by the completion of the Christian powers reconquest of all the northern territories.

El Cid’s greatest contribution to the Reconquesta came during this phase of the war and his finest victory was the capture of Valencia in 1094, which he later died defending in 1099. 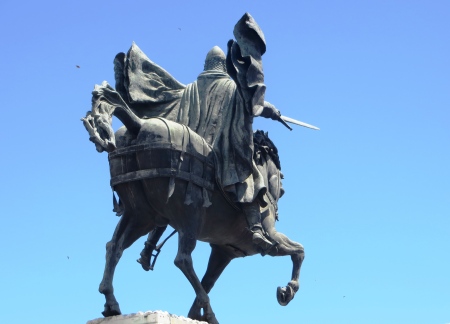 After a period of Muslim resurgence in the twelfth century the great Moorish strongholds in the south fell to Christian Spain in the thirteenth, Córdoba in 1236 and Seville in 1248 leaving only Granada in the south, which since 1238 was a dependent vassal of the King of Castile.

In 1469, the crowns of the Christian kingdoms of Castile and Aragon were united by the marriage of Isabella I of Castile and Ferdinand II of Aragon.  In 1478 the Moors were driven from the Balearic Islands and in 1492 the Christians captured Granada, ending seven hundred and eighty-one years of Islamic rule in Iberia.

The Treaty of Granada guaranteed religious tolerance toward Muslims but the new state of Spain was beginning to flex its muscles and the year 1492 marked the arrival in the New World of Christopher Columbus and a law requiring Jews to convert to Catholicism under the Spanish Inquisition or face expulsion from Spanish territories.  The Catholic Monarchy instigated a policy of unrestrained ethnic cleansing and not long after, Muslims too became subject to the same requirement.

El Cid and Alvar Fáñez – another hero of the Reconquest

El Cid and his horse Babieca

El Cid and his Wife Ximena

El Cid and the Castle of Belmonte

Northern Spain – The City of Burgos 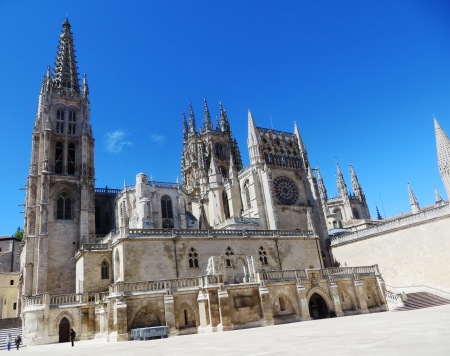 It was late afternoon when we arrived in Burgos and we located the hotel without too much difficulty and checked in.  I had chosen the Meson Del Cid because of its location and because the hotel web site boasted about the panoramic views of the Cathedral.

Unfortunately our room didn’t have a panoramic view of the Cathedral or its celebrated ornate front door as we were allocated a room at the rear with a view of a tiny courtyard and the back door of an adjacent church and I immediately decided (perhaps unfairly) that this was most likely going to adversely affect my customer review scoring.

In the morning it was disappointingly overcast and clouds were crawling over the mountains that surrounded the village and prospects didn’t look good so we had to arrange an appropriate itinerary to take account of the weather.  It certainly wasn’t seaside weather so we decided to travel inland and see the countryside and after a substantial continental breakfast prepared by Luz, the housekeeper, we left Liendo and drove first west and then south into the hills. 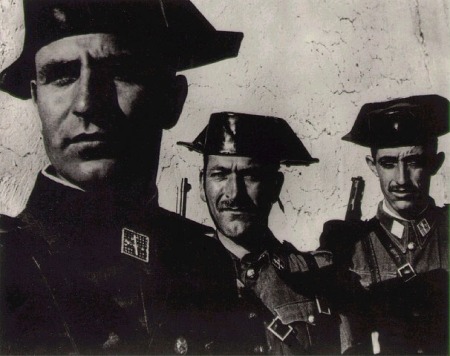 There was still a very long way to go so we planned for another very early start.  When we woke in the morning there was no power anywhere in the hotel and we had to pack in pitch darkness so goodness knows how much stuff we left behind.  We met in the car park and then we had our first problem of the day – the car wouldn’t start!

A hero needed a wife and El Cid was married in either in1074 or 1075 to Doña Ximena of Oviedo, a city in the modern day Principality of Asturias in the north of Spain but in the eleventh century part of Alfonso VI’s Kingdom of Leon and Castile.

The story of the reconquest is a classic case of history being written by the winning side and has become a highly romanticised version of early medieval Spanish history.  El Cid wasn’t the only Spanish hero of the ‘Reconquista’ as many other warriors were fighting for the ambitious northern Kingdoms as they moved south in search of new lands and acquisitions.  Another hero of the crusade against the Moorish invaders was the Castilian nobleman Alvar Fáñez de Minaya who fought for King Alfonso VI of Castile-Leon and has been popularised by his appearance in the ‘Cantar de Mio Cid’ in which he is described as a friend and cousin of El Cid.