Wales – Aberdovey and the Welsh Language

The following morning it was raining. Raining quite hard as it happened and this was much more like the Wales that I remembered from family holidays when I was a boy.

After breakfast it began to ease away and by nine o’clock I was able to leave the caravan and walk again to the seafront and take the cliff top walk once more to the war memorial and look out over the bay where things looked very different today as grey clouds filled the sky in all directions.

On the way back down I spoke to a man who was hoping for better weather because he was preparing to do some repairs and painting of his house and he told me how the properties are under continual assault from the weather and from the salt water and how much work that entails in keeping properties well maintained.  Back home I like to paint my house every fifteen years or so, whether it needs it or not, but here he explained it is an annual chore. 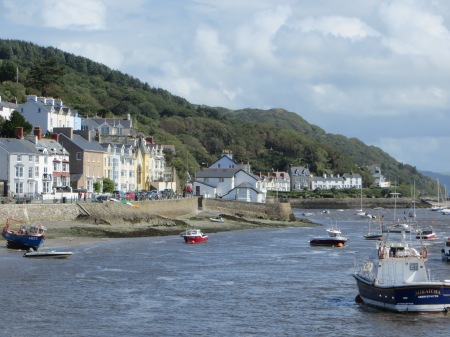 By mid morning there was some improvement so we left the caravan and headed north towards the seaside town of Aberdovey on the opposite side of the estuary. I always like to go to Aberdovey because it is one of my favourite places in Wales.

A perfect seaside town with a sandy beach, a busy harbour, brightly painted houses and a small public park.  Parents with children entertain themselves in the simple pursuit of crabbing because thankfully there are no amusement arcades, no tacky tourist trains and no furious fast food diners.

As we drove around the north shore of the estuary the weather started to change for the better and by the time we had found a parking spot and wandered off in the direction of the harbour the clouds were rapidly disappearing and the sun was beginning to shine.

After lunch at the Dovey Inn we spent some time in the charming streets away from the seafront and left and carried on to Towyn.  Towyn is the terminus of the Talyllyn railway, which is just about my favourite narrow gauge railway in Wales but I didn’t mention this to my travelling companion because I was certain that having turned down the opportunity to take the Vale of Rheidol Light Railway just the previous day he was almost certain not to have had a Saint Paul on the road to Damascus type moment overnight and suddenly been converted into a steam railway enthusiast.

Instead we went to the seafront and sat and in the sunshine were content to sit and watch the sea and the boats before going to a supermarket for some supplies.

We had driven here along the coastal route so we choose now to return via the country so we headed inland towards the foothills of Cader Idris mountain range and Tal-y-lyn lake.  If I was choosing to move house and live in Wales then this is where I would select, I prefer it to the north and the south, the countryside is green and gentle, the lakes are blue and serene and it is not nearly so busy.

Place names are hard to pronounce of course because trying to understand the Welsh language is like trying to crawl through a hawthorn bush without getting lacerated and as I called out the names of the villages as we drove through them and each one I got horribly wrong.

Since devolution the Welsh language fanatics have become rather like the French with their opposition to anything Anglo-Saxon and they have gone to a lot of trouble to replace as many words as possible and when they can revert them to Welsh.

The weather continued to improve through late afternoon and after pie supper cooked in the popty-ping I made way once more to the sea and the pebble beach to wait patiently for a sunset that was preparing for a show in the west and as the sun dipped slowly down I wasn’t disappointed.