A to Z of Statues – C is for Tommy Cooper

When I was at Cardiff University in 1972 to 1975 I used to regularly take the train on the Welsh valley line to nearby Caerphilly. I used to like Caerphilly, especially the castle.

I didn’t know then that it was the birthplace of the comedian magician Tommy Cooper who was born there in 1921.

Hands up if you knew Tommy Cooper was born in Wales.  Overseas readers are excused the exercise.

After leaving University I didn’t return to Caerphilly until I visited the town with my travelling pal Dai Woosnam in 2016, We weren’t looking for Tommy Cooper especially but came across his statue. Actually we were looking for a landmark commemorating another famous Welshman with an association with the town – Guto Nyth Brân.

Eventually we reached the elevated village of Llanwonno and my fears were realised – it was indeed another church yard that we were about to visit.

Who was buried here I wondered, who was so famous that it was worth making this driving detour up the side of a mountain?  As we walked from the car park to the church my friend told me the story of Guto Nyth Brân who, legend has it, was the fastest running man ever in the World.

Local folklore said he could run quickly enough to catch hares and foxes and birds in flight.  If his mother ran out of milk for a cup of tea he could  run to the local shop there and back, five miles away, before the kettle boiled.  I assume of course that he must have had the right change on him at the till with no fiddling about in his pockets or his purse for that elusive penny! 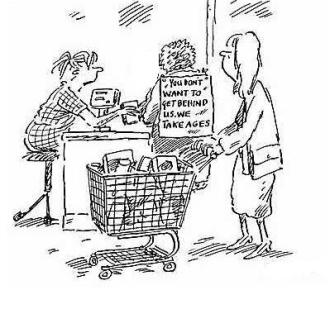 As stories of his running speed spread through the Valleys he was regularly challenged to competitive races on which substantial bets were placed.

His first race, organised by his girlfriend and business partner, Sian the Shop (not to be mistaken with Sean the Sheep)  saw him take on a previously unbeaten English runner. He won the race easily as well as £400 prize money.  A huge amount of money in those days, equivalent to roughly £50,000 today !  He continued to race and accumulate a fortune until he was thirty.

He was so famous that had there been television in the eighteenth century then he would surely have won BBC Sports Personality of the Year and the USA Sports Illustrated  Sportsperson of the Year Award. 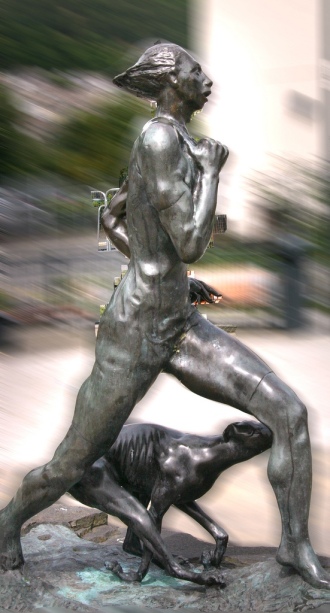 After a while he retired (he could afford it) but when he was thirty-seven Sian the Shop persuaded him as a matter of pride and principle to come out of retirement and take on a new runner called the Prince of Bedwas who was boasting that he was unbeatable. This was for a prize of one thousand guineas (a hundred and fifty thousand pounds) and on account of the huge prize money on offer it was to be an appropriately gruelling twelve-mile race between Newport and Bedwas near to the town of Caerphilly and for most of the way a steady climb from sea level to seventy metres or so with an especially challenging final hill.

To put that into some sort of perspective the current official IAAF world record for a half marathon (roughly the same distance)  is fifty-seven minutes and thirty-two seconds set by Kibiwott Kandle of Kenya in December 2020 at the Valencia half marathon in Spain.  I realise that the timing of races might now be considerably more precise than it was three hundred years ago but today athletes have Nike running shoes and fitness management support staff and five minutes is a lot to explain away even by time-keeping inaccuracies of such great margins.

Sadly the story ended in tragedy after Sian slapped him on the back so hard in celebration Guto suffered a heart attack and collapsed and died.  Some girlfriend hey!

Every year there is now a road race in nearby Mountain Ash to commemorate the life and achievement of Guto Nyth Brân.

There was disappointment for us too this afternoon because the Church was having its roof replaced and to protect the gravestone from potential damage from falling masonry it was fully encased in a plywood box to protect it and on it was pinned a short note apologising for the inconvenience.  You would have thought that they could at the very least have put up some sort of replica or included a picture! 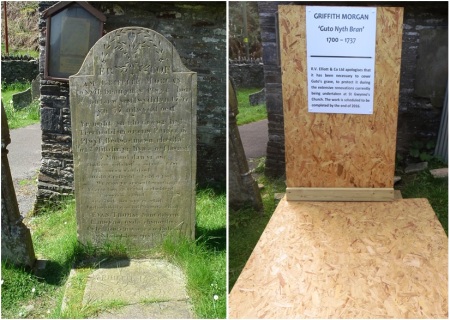 I couldn’t help but laugh and my travelling companion saw the funny side of it as well.  He likes gravestones and monuments and plaques and struggles to understand why I don’t share his enthusiasm for them.  I explained that as a history student I like stories and facts but I don’t really get any sort of adrenalin rush from seeing where famous people were born or are buried.

The following day we drove to the town of Caerphilly where he had learned about a memorial plaque that had been erected in another churchyard to commemorate Guto Nyth Brân and the finishing point of his famous last race so we set out to find it.

It was there right enough but what a shame it wasn’t covered up in embarrassment with a sheet of securely nailed, solid plywood, maybe two, just in case the first one falls off  (a real double-bagger this one) because in respect of both content and design I nominate this memorial plaque to be, without fear of contradiction, the worst that I have ever, ever seen…

It rained in Welshpool, it rained in Newtown, it rained in Llangurig and it rained in Aberystwyth as we reached the coast and the road swung south towards our destination.  To our right the sea was grey and uninviting, lashed with spiteful squalls of stinging rain as wave after wave of dark clouds swept in from the Irish Sea and it was about now that I was forced to concede that we probably wouldn’t be having a barbeque this evening.

“Why Richard, it profits a man nothing to give his soul for the whole world… but for Wales?” –  Sir Thomas More – ‘A Man For All Seasons’

I was surprised that I was so easily persuaded to book a holiday cottage in Wales because most of my holiday memories of the Principality involve precipitation.

When I was a boy we used to go on family holidays to Borth in Mid Wales and stay in a caravan.  It always rained and all through the night there was a steady pitter-patter of rain on the biscuit tin roof and everywhere seemed damp, musty and cold.  Later we used to go the Plas Panteidal Hoiliday Village near Aberdovey and although the accommodation was an improvement the same could never be said for the weather.