The Causeway Coast, Derry to Bushmills 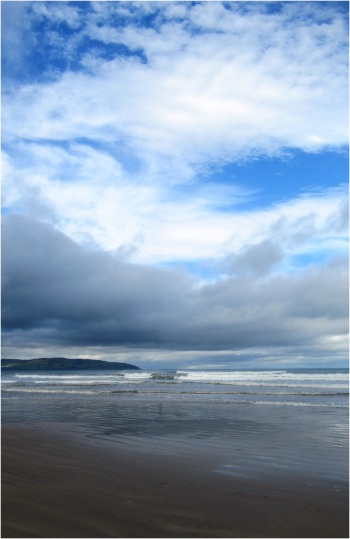 After negotiating our way out of the city we headed east and started our coastal drive at Magilligan point, a nothing sort of place really at the edge of an army practice firing range and close to a high security prison.  We stopped for coffee and watched the ferry as it crossed Lake Foyle on its way to the Republic and visited a restored Martello Tower, built during the Napoleonic Wars as protection against invasion. 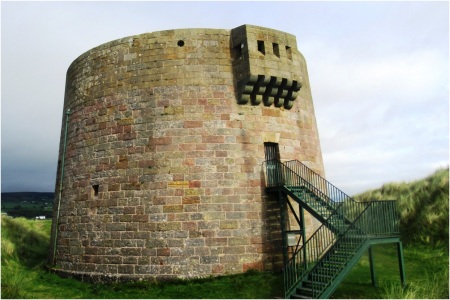 There wasn’t a great deal to detain as at Milligan Point so we began the one hundred and thirty mile road trip along the coastal scenic drive which clings to the coastline like velcro alongside a ribbon of continuous sandy beach.

Enjoying the sunshine we stopped frequently at the empty beaches stretching expansively both east and west to watch the Atlantic breakers raging in on a strong wind that tousled our hair and tugged at our coats, walked along the crisp firm sand and filled our willing lungs with salty sea air.

We left the coast briefly to visit the ruins of Downhill House, a stately mansion built in the late eighteenth century by Frederick 4th Earl of Bristol and Lord Bishop of Derry, an exceptionally wealthy man who imagined a classic mansion in a scenic location and lavishly filled with fabulous art and a well stocked library.

It didn’t turn out to be a very good spot and it suffered from salt corrosion, Atlantic storms and a major fire which did extensive damage in 1851.  It was restored but during World War Two it was used as a billet for the RAF and the men living there had little regard for history or culture and left it in a desperate condition.

Sadly this is a familiar story about misbehaving troops in requisitioned big houses and country estates and many suffered the same fate. No need for the Luftwaffe to get involved.  Apparently owners in general didn’t mind their properties being borrowed for schools or hospitals but dreaded the armed forces being moved in because this guaranteed damage and expense.

After the war the place was dismantled for its stone for alternative construction work nearby.

After Castlerock we were obliged to leave the coast and drive towards the town of Coleraine so that we were able to cross the inconvenient River Bann, at one hundred miles long the longest river in Northern Ireland and then back to the coast at Port Stewart which was surprisingly busy and we struggled to find a car parking space close to the town.

After a lunch time stop for refreshment we bypassed nearby Portrush and continued to follow the coast until we reached Dunluce Castle. The road is rather precarious at this point, it reminded me of the Amalfi Drive in Italy and we  approached the castle along a twisting route that dropped dramatically down to the cliffs and showed it off to its best advantage.

Even though it was late afternoon and close to closing time it was still rather busy and the car park was full and there were a couple of tour buses out of Belfast disgorging their passengers.  Dunluce Castle was used in the TV show ‘Game of Thrones‘ and for reasons that I don’t understand these filming locations attract thousands of visitors.  On account of this it was rather overcrowded so with natural skinflint tendencies kicking in we declined the opportunity to take the internal tour of the ruins and satisfied ourselves instead with a wander around the exterior.

Actually I am not sure that the £5 entrance fee was really worth it because without doubt the best views were from the surrounding cliffs and that is what I always tell myself when I have been too mean to pay the admission fee.

From there to the small town of Bushmills and our overnight accommodation and after a good day things started to unravel.  While Kim and Margaret settled into the accommodation, Mike and I were entrusted with finding somewhere to eat later.  This proved more difficult than we had imagined and all that we could find was a hotel restaurant but not until half past nine.  We booked it but I knew this would be too late and would meet with disapproval.

It was too late and it did meet with disapproval so we rang to cancel  and walked out instead for a fish and chip supper.  On the positive side, once forgiven we got to go to the pub. 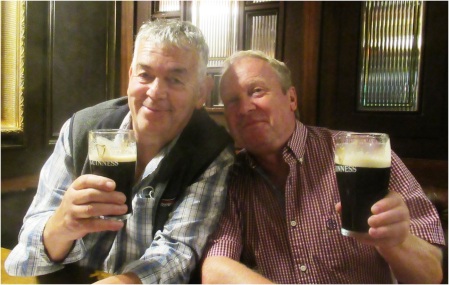 Derry/Londonderry – A Walk Along the Bogside 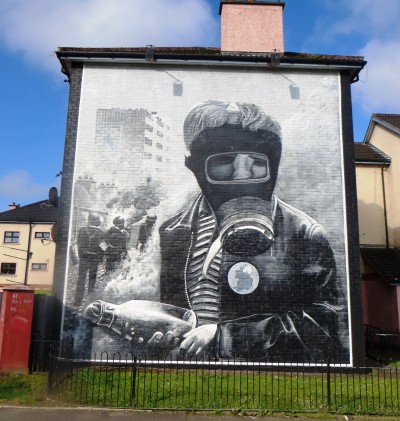 We have visited Ireland, North and South, five times and never once have we experienced bad weather.  Kim refuses to believe the stories about how wet it can be.

It was a beautiful morning, the sky was blue and the sun was shining.  As I mentioned before we were staying in the Nationalist Bogside area of the city which has a controversial and unhappy past.  It was peaceful enough this fine morning  but has had a recent bloody and violent contribution to the Troubles.  Indeed some historians identify Londonderry/Derry/Stroke City as being the very crucible of the bloody civil war.

In the 1960s Catholic Derry considered itself to be suffering religious and political persecution (quite rightly as it turns out) and the city became the flashpoint of disputes about institutional discrimination. Despite having a nationalist majority the city was permanently controlled by unionists due to the partisan drawing of electoral boundaries. In addition the city had very high unemployment levels and very poor housing. Overcrowding in nationalist areas was widely blamed on the political agenda of the Unionist government, who wanted to confine Catholics to a small number of electoral wards to effectively restrict their influence.

In August 1969 following the annual Protestant Apprentice Boys Parade Nationalists clashed with police in an incident remembered now as ‘The Battle of the Bogside’ which directly led to widespread civil disorder in Northern Ireland and the intervention of the British Army.

Worse was to come on Sunday January 30th 1972 when during a Catholic civil rights march thirteen unarmed civilians were shot dead by British paratroopers, another thirteen were wounded and one further man later died of his wounds. This event came to be known as ‘Bloody Sunday’.

This incident remains an open wound between the two factions and the British Army but the current official verdict was delivered by the Saville Commission which was published in June 2010.

The report concluded, “The firing by soldiers on Bloody Sunday caused the deaths of 13 people and injury to a similar number, none of whom was posing a threat of causing death or serious injury.” Saville stated that British paratroopers “lost control” fatally shooting fleeing civilians.  The report states, contrary to the previously established belief that no stones and no petrol bombs were thrown by civilians before British soldiers shot at them and that the civilians were not posing any threat.”  Not the British Army’s finest hour! 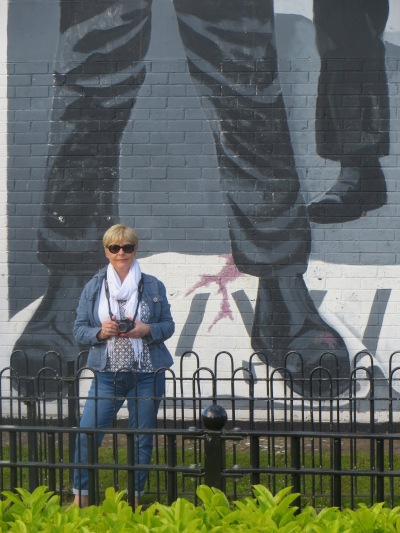 Just outside the city walls and only a short walk from our guest house was the very place where the Bloody Sunday confrontation took place so walked down the hill from the fortress walls and saw three famous monuments, ‘You Are Entering Free Derry’, a message painted on the gable end of a row of terraced houses, long since demolished, the Bloody Sunday memorial itself and a third monument remembering the Maze prison notorious now for internment without trial, hunger strikes and the death place of the most famous hunger striker of all, Bobby Sands.

There are guided tours of the Bogside but we chose to do this by ourselves and although it felt quite safe on the busy main road I do admit to  becoming uneasy whenever we strayed into the side streets where signs invited the British to ‘Get Out Now’ and others encouraged local people to join the IRA.

We weren’t put off by this however because we wanted to see the murals, works of urban art really.  These were less political statements but a visual telling of the story of the Bogside troubles.  The political statements were there too but these were smaller information boards which told a sectarian and I have ro say a very one sided story.

I am glad that I walked down to see this but after thirty minutes or so I was happy to leave and walk back now to our car, pack our bags and head east for a drive along the Causeway Coast.