Killer in the Garden 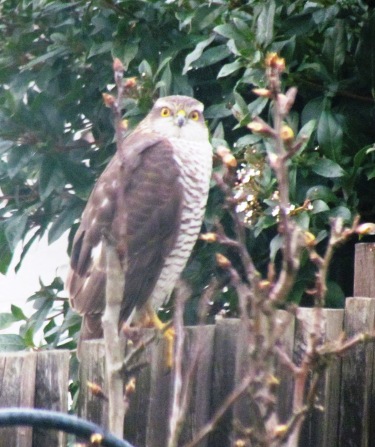 Earlier Today In The Garden

Having mowed the lawn and cut the edges (a job I hate) I was admiring my work when this magnificent creature flew into the garden.

The Sparrowhawk as well as being a handsome bird is a ruthless killer and designed to hunt expertly from the air.  It tracks at great speed, darting out of cover with extreme dexterity combined with deadly accuracy to kill its prey.   It doesn’t hover, like the Kestrel or the Hawk, but relies on pace, momentum and surprise to catch its food and for this it is well designed with long slim legs, large sharp talons and a very efficient hooked beak that it uses for piercing and tearing up its prey.

The male Sparrowhawk was formerly called a musket, and the gun was named after the bird which perhaps gives a clue as to just how deadly they can be.  They are expert hunters and very fast fliers, and often make quick dashes over hedgerows or along the ground when chasing prey, which is often spectacularly captured using a downward plummet from the sky with closed wings.  The pairs work well together as a team and to avoid competition between the two sexes, males concentrate on smaller birds, such as sparrows and tits, and females hunt larger birds including collared doves, thrushes and starlings.  The bird in my garden was a female.

Each adult Sparrowhawk will kill and consume a couple of small birds a day for themselves and when they are breeding  a pair needs to catch another ten or so just to feed the chicks.  According to the RSPB there are forty thousand breeding pairs in the United Kingdom so by my calculation that is twenty thousand nests with an average of three chicks each so to feed themselves and their offspring this means three hundred thousand murders a day.

Later in the afternoon I found the remains of an unfortunate collared dove.

As Thomas Hobbes said in his philosophical treatise, Leviathan: ‘Life (in the state of nature) is nasty, brutish and short”.

The spread of Collared Doves across the United Kingdom has been very rapid. From the first breeding report in 1955 the species was subsequently reported breeding in Kent and Lincolnshire in 1957, with birds also seen as far north as Scotland.  Two years later Ireland was colonised and by 1970 there may have been as many as twenty-five thousand pairs in Britain and Ireland and between 1972 and 1976 the population increased five fold.