Travels in Italy, A Walk around Lake Como 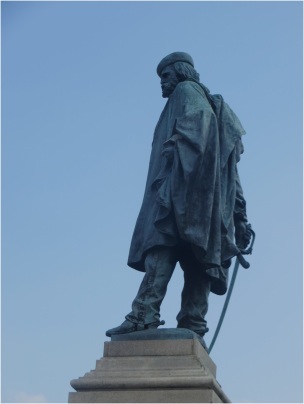 “This lake exceeds anything I ever beheld in beauty. It is long and narrow, and has the appearance of a mighty river winding among the mountains and the forests” – Percy Bysshe Shelley

After an average breakfast at the Hotel IBIS we checked out and fearing chaotic queues swiftly made our way to the Central Station.  Two days earlier we had arrived in the dark and had not fully appreciated just what a magnificent building this is, almost as good, it has to be said, as the Cathedral in the heart of the city.  Completed in 1931 it is built in the Italian Fascist style with a combination of brutalism and neo-classicism.  It shouldn’t really work but it does.

Buying a train ticket in Italy isn’t especially easy because Italians have the same ill-discipline in a railway station booking hall as they do when they are driving on the roads.  They don’t especially like queuing and will constantly switch lines just like suddenly changing lanes on a motorway, they are impatient and have zero tolerance for anyone that struggle with the automatic ticket machines.  Lose concentration for a fraction of a second and you will find two or three people suddenly ahead in the queue who weren’t there previously.

It was only a short journey of thirty minutes or so through unremarkable countryside and stopping frequently at a succession of graffiti scarred concrete stations of no special significance until the tired and scruffy train finally approached the foothills of the Alps and the southern tip of the lake and the railway station.

We chose to walk from the station to the accommodation, I always choose to walk rather than take a taxi, I don’t like taxis, it was about a mile away to the edge of the water and the lakeside fringe of the town and after we had found it, checked in and approved it we ventured out onto the streets.

To begin with we explored the town centre and found somewhere for a coffee and then we made our way inevitably towards the lake.

East or west? We chose east and we walked around the lake as far as we could until we came to a hotel car park and lido and a dead-end so we were obliged to turn around and walk back in the same direction running the gauntlet for a second time of a succession of insistent waiters all touting for business in the sprawling ribbon of restaurants and cafés that lined this section of the lake.  We declined every invitation because Como turned out to be rather expensive and whilst I like to sit at a pavement table and enjoy a beer or a glass of wine I find it less enjoyable when the cost is higher than my skinflint budget allows.

To be fair these places were in prime position overlooking the lake and probably entitled to charge a premium so we headed towards the periphery of the town in search of a place with prices more to our liking and after thirty minutes or so found exactly what we were looking for.

Later we walked around the attractive town in search of somewhere to eat and came across a traditional trattoria and enjoyed a simple pasta meal.  We took our time over the meal and relaxed, we had walked nine miles today.

One of the main tourist attractions in Como is a funicular railway which links lakeside Como to the elevated town of Brunate over one thousand, six hundred feet higher and with commanding views of the town and the lake.  It seemed to us to be forever busy and when we walked past there was a queue much longer than my short patience quota so the next day we started early and took a ride before breakfast to the top.

We sauntered along the mountain paths looking for the best views which sadly were few and far between blotted out as they were by the high fences of the expensive houses and villas which decorate the mountain top. Eventually we reached a panoramic viewing point and below us we could enjoy the red-roofed town and the shining blue lake below with a panoramic view across to Switzerland barely five miles to the west.

Lake Como is a curious shape rather like the three-legged crest of the Isle of Man, after Lake Garda and Lake Maggiore it is the third largest lake in Italy and at one thousand three hundred feet deep it is the third deepest lake in Europe after Lakes Hornindalsvatnet and Tinnsjå, both in Norway.

We spent a very pleasant hour or so at Brunate but quickly ran out of things to do so took the funicular back to Como and swaggered smugly past the long queue that was beginning to form. We stopped for breakfast now and as we ate planned our itinerary for the remainder of the day. 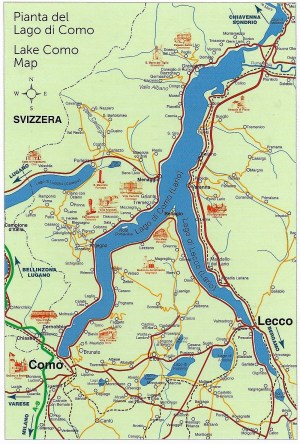