As we walked we passed one hundred year old villas and mansions in various states of disrepair that are too expensive to renovate because restrictive planning laws insist on exact restoration due to their historical and cultural importance.  Instead it is cheaper to build new properties so these neglected fine buildings steadily decay and collapse.  One day they will be gone and that will be a real shame.

As the day continued to get hotter, shutters were thrown back like butterfly wings basking in the sunshine, washing hung steaming from open windows and every doorstep had a sleeping cat for decoration. 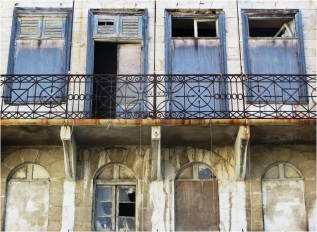 The seven hour ferry journey turned into a seven and half hour ferry crossing on account of high winds and rough seas and by the time the Aqua Spirit finally docked in Syros at about seven thirty in the evening we were glad to get off.  Kim especially so!

After a little difficulty we located and approved our accommodation and with the rosy glow of a sunset over our shoulders surveyed the town from our balcony as roosting birds chattered in the tree tops, bats began to swoop overhead and the lights began to flicker on one by one.  We thought that we might like this place.

In the morning a sunrise invaded our room as golden light leaked through the gaps in the shutters and the curtains and woke us early which gave us plenty of time to shop for breakfast in a nearby bakery and to arrange our schedule for the day.

In contrast to most of the Cyclades Islands Syros is a busy port with an important dock yard and ship building industry.  It flourished after the Greek War of Independence of 1821 and for a while was the most important and most prosperous city in all of Greece.

There are two important areas of the city and as were here for two days we thought we might visit one each day.  Ano Syros is the old medieval district built at the top of a steep hill and Ermoupolisis is the post 1821 development built in the neo-classical way of Venetian style villas and a practical grid pattern of streets that rises steeply and dramatically from the water’s edge in the port.

Neither were far away but both involved a demanding climb up a never-ending set of steps to get to the top because Syros is what I describe as a vertical city.

We thought we might start with Ermoupolis and walked first to the main square and a massive city hall building appropriate to its status as capital of the Cyclades region of Greece.  It is quite unlike anything you might expect to find in the islands with marble footpaths cascading like a hanging garden and a large statue of Andreas Miaoulis, a hero of the Greek War of Independence.

From the square we moved into the back streets and began the slow steady climb towards the top.  It was relatively easy at first but soon became exhausting in the hot sun and we started to slow down and tackle the ascent in sections of fifty steps at a time, stopping at each milestone for a break and a breather.  There must have been a thousand steps – it felt like ten thousand.

As we walked we passed villas and mansions in various states of disrepair, too expensive to renovate because restrictive planning laws insist on exact restoration due to their historical and cultural importance.  Instead it is cheaper to build new properties so these neglected fine buildings steadily decay and collapse.  One day they will be gone and that will be a real shame.

As the day continued to get hotter, shutters were thrown back like butterfly wings basking in the sunshine, washing hung steaming from open windows and every doorstep had a sleeping cat for decoration.

Eventually we reached the very top and the Greek Orthodox Church at the peak and found a bench to sit down and look down and simply admire the view.  A handsome town of pastel shades tumbling all the way down to the port and on an adjacent hill the sister village of Ano Syros challenging us to continue our walk and complete both climbs  on the same day.

As we started back down we were undecided about that and at a point where we really needed to make the decision we stopped to consider the prospect.  Kim was all for going straight back  and leaving the second climb until tomorrow but this didn’t make sense to me because we were already half way there and would have to do the same thing all over again the next day.

As we debated our options a Greek man came by and intervened and interpreted our dilemma as a desire to walk to the second mountain peak and although he spoke no English, and the pair of us no Greek he made it clear that he was happy to act as our guide and beckoned us to follow him to Ano Syros and at the time it seemed rude not to!

So that is how we came to tackle both climbs on the same day.  The  steps to Ano Syros were steep and irregular and the climb was difficult and demanding and with stops becoming all more frequent it took us some time to reach close to the top where we were happy to find a bar and stop for a while for a drink before carrying on to the Catholic Church of St George at the very pinnacle of the climb.

Going up was hard on the thighs but coming down was tough on the knees and it took us some time to identify and negotiate the least difficult route back to the main square where we were happy to stop again at a bar for some time where we looked back at the twin peaks and congratulated ourselves several times on our achievement and I wrestled with the conundrum of when they build a village on a mountainside do they start at the top and work down or at the bottom and work up?