Northern France, The Battlefield and Museum of Agincourt

“Once more unto the breach, dear friends, once more;
Or close the wall up with our English dead!
In peace there’s nothing so becomes a man
As modest stillness and humility:
But when the blast of war blows in our ears,
Then imitate the action of the tiger;
Stiffen the sinews, summon up the blood,
Disguise fair nature with hard-favoured rage;
Then lend the eye a terrible aspect”

Having visited the British and Commonwealth War Graves, the site of the German coastal fortifications and Napoleon’s La Colonne de la Grande Armée in Boulogne we were getting an appetite for more military history so thought we might be able to visit a couple of sites that hadn’t previously been part of our plans.

Driving south our first visit was to the site of the Battle of Agincourt where almost six hundred years ago the English King Henry V defeated the largely superior French army of the time during the Hundred Years’ War (which incidentally lasted for 116 years, but the Hundred and Sixteen Years War doesn’t sound quite so catchy).

Our version of the battle is mostly informed by William Shakespeare in the play Henry V but as with most of his histories this was a highly dubious account of what really happened and modern historians have reached the view that far from being gallant and chivalrous and still celebrated as a golden moment in England’s history the battle was filthy, horrible and merciless.

Weapons were crude and brutal.  Arrows from the longbows of the Welsh archers rained down and where the sword of a knight would not penetrate the armour of a noble foe and did not have the weight to knock a man off his feet, a poleaxe (a long-handled axe or hammer, topped with a fearsome spike) wielded by a common foot-soldier would fell him fast and then it was easy to raise the victim’s visor and slide a knife through an eye.  That was how hundreds of men died – their last sight on earth a dagger’s point. 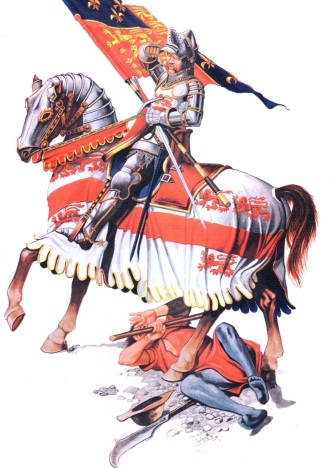 It turns out that Agincourt is not a tale of chivalry at all, but rather of armoured men hacking at each other to break limbs and crush skulls.  At the height of the battle, when Henry V expected an attack on his rear that never materialised, he ordered the captured French prisoners to be slaughtered, an action today that would almost certainly be denounced as a war crime.

In the cold, wet dawn of October 25th 1415, no one could have expected Henry’s army to survive the day.  He had about six thousand men, more than five thousand of them archers, while the French numbered at least thirty-thousand and were so confident of victory that, before the battle was joined, they sent away some newly arrived reinforcements – it didn’t occur to them that they might need to make some half-time substitutions!

After a short drive we arrived at the site of the battle, just a barren field that doesn’t seem anything special now after all this time and we may well have missed what is now a rather unremarkable meadow in northern France if it wasn’t for the roadside decoration where English archers and French cavalry faced each other once again in row after row of wooden statues.

We stopped for a while and surveyed the field which gave no clues to the battle and then we continued to the Agincourt Museum.

I am not really sure what I was expecting but I was certainly surprised by the place.

I had always imagined that France would have no real stomach for financing and building a museum to commemorate a humiliating defeat but inside there was an unexpectedly balanced account of the battle and the history of the Hundred Years War (which I suppose the French did win at the end of the day so they can afford to be magnanimous about it) and in some of the displays and the explanations I had to remind myself that Henry was the English King and it was the French who were defeated here.

Anyway, six hundred years is a very long time and I don’t suppose it really matters that much anymore?

It is only a small museum and it didn’t take that long to walk around, read the history and try the interactive displays and before very long we were out the other end, back in the car and driving north along the rows of archers to the site of a more recent conflict, the Eperlecques V2 Blockhaus north of Saint Omer on the road to Calais.