This year (2022) my little brother Richard turned 60 and we wanted to do something special to celebrate.

Richard was going to Yorkshire for a few days with his wife Deanna, he likes Yorkshire and so do we.  My sister Lindsay has never been to Yorkshire and likes Cornwall. She wants to go and live there.  I don’t understand why anyone can prefer Cornwall to Yorkshire.  Richard invited us to join him and we were easily convinced.

So we set off early in the morning with the intention of visiting the town of Skipton, a market town in the north of the County.  In Yorkshire market towns have proper markets and local people go to shop there.  They are sociable, busy, vibrant and wonderful.  If I lived in Yorkshire I would happily go shopping every Saturday.  I would buy the local produce in the butchers and the greengrocers. Not something that I would say about my home town of Grimsby I have to say.

In 2018 Skipton was included in the Sunday Times report on Best Places to Live in northern England.

Historically in the East Division of Staincliffe Wapentake in the West Riding of Yorkshire, it is on the river Aire, by an infuriating only two miles short of the being the longest, it is the fifth longest river in Yorkshire after the Ure/Ouse, Swale, Derwent and Don,  Also running through the town is the  Leeds and Liverpool Canal dating back to 1774 and one of the earliest canals to be constructed in the UK.

The name Skipton means ‘sheep-town’, a northern dialect form of Shipton. The name is recorded in the Domesday Book of 1086. Yorkshire claims to have more sheep than any other English County but you have to be careful with claims like this, it is a very big county, the largest in England so this is most likely not too difficult.  The Swaledale sheep with its characteristic black face and curly horns is the emblem of the Yorkshire Dales National Park.

On the subject of sheep Scotland claims to have more sheep than people and so does New Zealand.  Derby County Football Club has a Ram as its mascot but no one really knows why.

This one lives in my back garden…

Famous people from Skipton – Thomas Spencer, the co-founder of Marks & Spencer, was born there in 1858.  He opened the first Penny Bazaar in Leeds in 1884.

Even more famous and regarded as one of the greatest bowlers in the history of the game of cricket, Fred Trueman was a fearsome fast bowler and was widely known as “Fiery Fred”. He was the first bowler to take three hundred wickets in a Test career.  It was against Australia in 1964 and I remember watching the moment in grainy black and white on BBC TV.  I used to spend hours watching Test Match coverage in those days.

No ordinary Saturday afternoon cricketer would want to face Fred Trueman, he had a wild mop of unruly hair and a threatening stare which said ‘this next delivery will take your head off’, he charged in like a bull on an ungainly angled run so the batsman could see him coming with his boots bouncing, flannels flapping and shirt sleeves sailing before a huge final last step lunge and a ninety mile an hour delivery.  Deal with that.  Together with Brian Statham, he opened the England bowling for many years and together they formed one of the most famous bowling partnerships in Test cricket history. 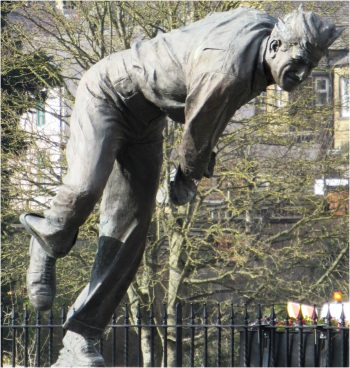 I immediately liked Skipton especially when I found the hardware store which is a feature of most Yorkshire towns but which seem to have disappeared almost everywhere else.  I remember one in my town of Rugby in the 1970s, it was called Clarks at the top of Railway Terrace and I went to school with David whose family owned the shop.  Gone now of course. 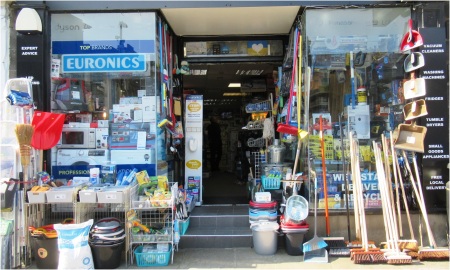 It was lunchtime so we found a local tearoom/café and ordered lunch.  I was hungry and went for the big one, a Yorkshire Steak and Ale pie and Kim accused me of being greedy but did then steal a forkful or two.

You have to have a steak and ale pie in Yorkshire…

In the mid afternoon we moved on to the village of Grassington which was recently used as the setting for the fictional town of Darrowby in the TV adaptation of  All Creatures Great and Small, instead of Thirsk where the actual story took place.

We took a circular walk across the fields and beside the river Wharfe and ambled slowly around the village streets before continuing our journey.

Tonight and  for the next three nights we were staying at the Wheatsheaf pub in Carperby near Aysgarth Falls.

Four days later on the drive home we stopped over in the town of Thirsk where there was a very fine street market where we bought cheese, bacon, sausages and meat pies … 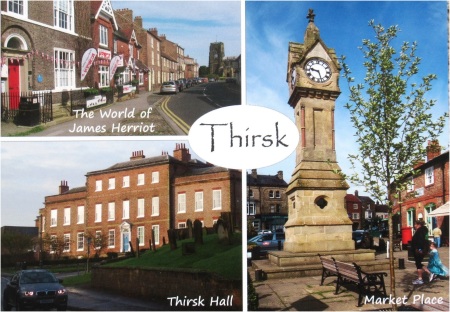