Soon it will be time for the annual trip to the Greek islands and this year I will travel to the Dodecanese island of Kos and then plan to visit a handful of small adjacent islands.  Unfortunately, according to Greek newspaper reports, it seems that this may not be quite so straightforward as it was in the past because there are big changes and significant problems with the ferries and last minute cancellations and rerouting is apparently creating difficulties for island-hoppers as well as the local Greek population.

Despite all the on-going problems in Greece the ferry system has remained relatively immune from troubles, except for the odd one day strike, but now the profitability of the ferry companies is being squeezed and the warning is that this will inevitably impact on services.  Partly as a result of the economic crisis operators are faced with a serious drop in business, on some routes as high as 15% for vehicles and 25% in passenger traffic in comparison with the same period last year.  What is creating the problems are fewer visitors from Western Europe and this year hard-pressed Athenians are staying home and not visiting the islands as they traditionally do in August.

The situation is made even worse by the high cost of fuel, which represents more than 50% of ferry operating costs now that the Greek Government has increased fuel duty in attempt to tackle the budget deficit.

These two factors are bad enough for the operators but many are also struggling due to outstanding subsidy payments owed by the Greek government to the companies in return for running services to otherwise unprofitable remote islands. Some of these payments are reported to be eight months outstanding and this is increasing ferry operators’ liquidity problems and they occasionally have difficulty paying for and obtaining fuel.  The Greek Government has a subsidy budget of 90 million euros for the period from October 2011 to November 2012 but there is pressure from shipping companies to increase this by up to 30% which given the state of the economy is unlikely to be approved but without the subsidies or private sector companies to step in some routes will be vulnerable.

Even before the crisis the ferry system was changing and from an island-hopper’s perspective not always for the best.  In the last couple of years there have been unfamiliar boats and these are all high speed and modern and they are not nearly as much fun.  They are more expensive, have inside allocated airline style seats, in some cases no access to the outside deck and generally lack character or individuality.

I understand that these changes are welcomed by the Government who have privatised the main routes and for the islanders who now have faster and more convenient transport options, but it is a sad day for back packers and island hoppers because I for one prefer the uncertainty of missed schedules, the battle with the elements and the confusion and commotion associated with getting on and getting off in preference to the reliability, the smooth ride and the orderly airline style of boarding and departure. 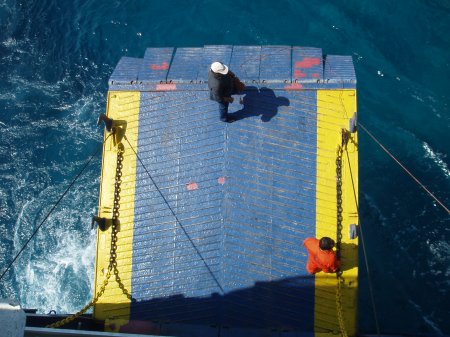 In 2006 I travelled from Naxos to Ios on an old rust bucket called the Panagia Hozoviotisa and there was a real sense of adventure. It was two hours late and there was a force seven gale and the boat struggled through the heaving seas but it was an honest hard working boat and the journey was wonderful.  I used it again in 2007 but now it is laid up out of service in Piraeus.  So too the G&A ferries the Romilda and the Milena that used to run the western Cyclades but have now been replaced with charmless monsters called Speedrunner or Seajet, boats named without thought or imagination and completely lacking any sense of romance.

Using the traditional old ferries was even more of an adventure because the island hopping guide advises that most of them should be avoided if possible.  By 2009 only the Ventouris Sea Lines Agios Georgios was left and I used it twice, once between Serifos and Sifnos, and then from Sifnos to Milos and I really took pleasure from sitting on the open deck with a Mythos, enjoying the sun and watching the islands slowly slipping by.

On the old boats it is possible to move freely from deck to deck, get close and see inside the bridge and see the captain at work and then at the other end watch the crew at work at the back of the boat and a mad rush of activity when they came in to a port and then left again shortly afterwards.  It was noisy and fun with creaking ropes and rattling chains and the men looked like real sailors.  On the new boats there is only a monotonous hum from the efficient engines and the crew, dressed in smart corporate uniforms, don’t really like you leaving your seat and wandering about unless you are going to the overpriced bar.

This year I will still make plans to visit some islands but it seems that I will need a bigger budget to pay the higher fares on the unsubsidised routes and I will need a good back-up plan if the ferries fail to run on the minor routes between the smaller islands.  It seems that sadly the days of cheap island hopping adventures may soon be a thing of the past.

The Express Skopelitis and Greek Ferries

Although we were travelling to Antiparos today the ferry wasn’t due to leave until very late afternoon so we had most of the day ahead of us to spend on Ios.  After our final breakfast with more delicious figs we packed our bags in preparation for later departure and then walked to the harbour.

I have been visiting the Greek islands on and off for twenty-five years and island hopping for the last six and I have noticed that things are beginning to alter, and not always for the better either.  There are new roads being constructed on the islands and EU funded improvements to ports, traditional mini-markets are becoming supermarkets and the ferries are beginning to change.  New roads are fine and improved port facilities are good, personally I prefer the dusty old shops with surprises in dark corners but I have to say that I am really disappointed by the ferry changes.