When it comes to taking pictures I like doors, statues, balconies and washing lines, Kim on the other hand likes people pictures so I thought I might share a few of them with you. 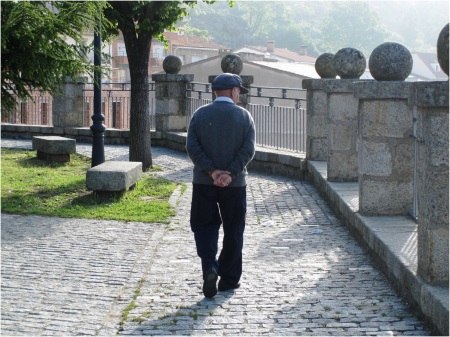 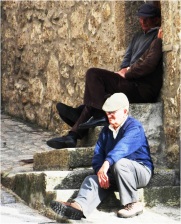 Travels in Spain – Pedro Bernardo in the Gredos Mountains 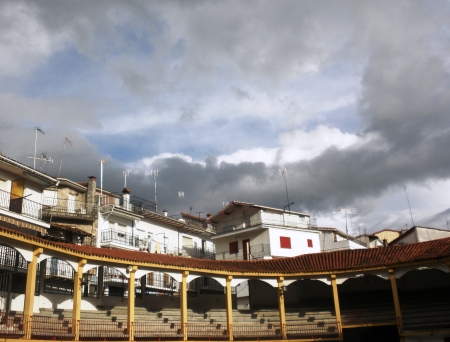 Driving out of the Castilian city of Talavera de la Reina was not too difficult except that we emerged from the underground car park onto a one way street and managed to cross the River Tagus twice when we didn’t even need to cross it at all until we found the road that headed north towards the Gredos Mountains.

As we made our way out of the city we began to slowly climb as we entered an area of green scrub land littered with huge granite boulders where the verges of the road were a riot of bragging scarlet poppies contrasting with demure damsel daisies.  Ahead of us we could see the mountains and the tops were covered in a few stubborn streaks of snow like paint streaks down the side of a pot that were in the protection of the shadows where the April sun couldn’t quite reach.

We were still in bright sunshine but ahead of us the sky was a dramatic dark grey, brooding, threatening, angry.

A short way out of Talavera we crossed the site of a famous battle of the Peninsula War where Sir Arthur Wellesley (the future Duke of Wellington) won one of his most successful and famous battles.

On 27th and 28th July 1809 the Battle of Talavera took place between the Anglo-Spanish army and the French.  It was a total allied victory and during the fight Talavera was hardly damaged as Wellesley’s army expelled the French from the city and the surrounding area.  The battle is also the setting for the fictional event of ‘Sharpe’s Eagle’ the first book written in Bernard Cornwell’s ‘Sharpe’ series.

The drive north took us into the neighbouring Province of Castilla y Leon and  through the little town of Buenaventura, which was closed, and then the climb became more dramatic as we reached almost one thousand metres when we made the approach to the mountain village of Pedro Bernardo.

We managed to stay just short of the cloud and the sun was still shining as we drove through several tricky hair-pin bends and into the village and easily found the Hostal El Cerro in the middle of the village on a dramatic bend in the road overlooking the valley below.

Although only two star it was an excellent hotel with an exceptional room, a wonderful view and with excellent weather the ideal place for an hour or so of  relaxing on the very private terrace.  After a while the grey sky started to muscle in however and there was a drop or two of rain but it was sheltered and there were expansive views over the rural hinterland with forests of elms, pines, chestnut and hazelnut trees and tumbling waterfalls and racing rivers making the town a scenic paradise. 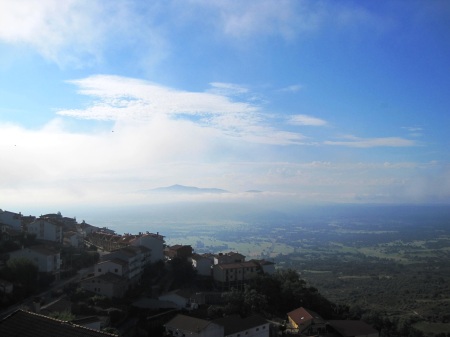 The origins of Pedro Bernardo are not clear; the original name of the village was Navalasolana, and there is a popular local legend that talks about the leaders of two groups of shepherds, Pedro Fernández and Bernardo Manso. They started to fight and struggled to get the control of the village and finally, the feudal lord of the council came up with a solution and decided to change the name of Navalasolana to Pedro and Bernardo to achieve peace and stop the struggles between the two competing bands.

This sounds very much to me like the squabble between Steve McQueen and Paul Newman over who should get top billing in the film ‘Towering Inferno‘ and where there was an equally sensible solution – to provide dual top billing, the credits were arranged diagonally, with McQueen lower left and Newman upper right. Thus, each appeared to have “first” billing depending on whether the credit was read left-to-right or top-to-bottom.

In the early evening we walked into Pedro Bernardo, passing first through the Plaza de Torres and then the Plaza Mayor where groups of mainly old men were sitting in groups and discussing the big important issues of the day – whether to have a wine or a beer, shall I change my underpants tomorrow and that sort of thing.  We walked through the twisting narrow streets flanked by crumbling buildings with precarious wooden balconies and barely inhabitable houses and we wandered aimlessly through the streets until we arrived at the church somewhere near the top of the village. 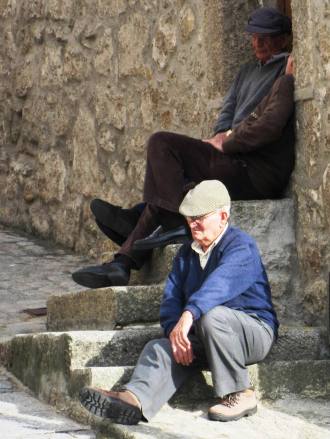 It was nothing special and really hardly worth the walk so we made our way back down and stayed for a while in the main square and had a drink had a bar where there was reluctance to serve us on account of the fact that the owner and bar staff were preoccupied watching a bull fight from Seville on the television.

The Hostel El Cerro was a perfect place, a rare mix of rustic charm and modern sophistication and we had no hesitation in eating in the hotel dining room.  It was only eight o’clock which seemed to surprise the staff but the chef was already there (in the bar) and we tucked in to an excellent Chuletón de Ávila.

Although it was still quite early, we had been a long day and had had an early start so after the evening meal we went back to the room and sat on the balcony with a final glass of red wine and from our elevated position watched the stars twinkling overhead in the velvet sky as though from the prow of a ship and stared into emptiness interrupted only by  the lights of the distant villages, Lanzahita, La Higuera and Ramacastanas lying like distant constellations in the vague immensity and then relaxed and content emptied the bottle optimistic that tomorrow would be another fine day. 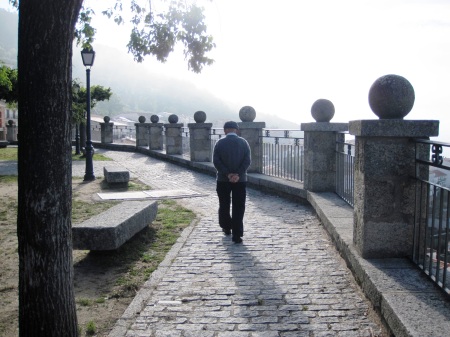 One of the hotel staff was very friendly and spoke good English and was interested in our travels around Spain and intrigued that we picked out of the way places like Pedro Bernardo instead of the well known tourist towns and we assured him that we liked it this way.

We told him that we were driving to Cáceres and he became quite insistent that we should take a short detour from our route and visit the Cuevas El Aguila, the Eagle Caves, in the foothills of the Gredos mountains but we had a long way to go and were not sure if we liked caves enough to go to the trouble.  When we checked out a few minutes later he reminded us again to make the visit and assured us that we would not be disappointed so it seemed rude not to go so we set off in the direction that he carefully marked on our map.

As we headed north we began to slowly climb as we entered an area of green scrubland littered with huge granite boulders where the verges of the road were a riot of red poppies and contrasting yellow daisies.  Ahead of us we could see the mountains and the tops were covered in a few stubborn streaks of snow in the protection of the shadows where the May sun couldn’t quite reach.  We were still in bright sunshine but ahead of us the sky was a dramatic dark grey, brooding, threatening and angry.