I have never actually written a post about the Battle of Britain but there is one about the two planes the Spitfire and the Hurricane.

Posted in Arts and Crafts, Europe, Growing up in the 1950s, History, Literature, Postcards, Travel

Following Britain’s rude world humiliation at the hands of the USA over the Suez crisis it was significant that also in 1956 the Royal Air Force decommissioned the Second-World-War bomber, the iconic Avro Lancaster.

Along with the spitfire this was the most successful British wartime plane and I have my own fond memories of them both because I can remember struggling to assemble an Airfix plastic model of the famous old aircraft.

Although the Spitfire is probably the most famous and the most recognisable of all the British planes used by the Royal Air Force during the Second World War the Hurricane was in fact the principal fighter in the Battle of Britain and not the Spitfire as most people might think.

In 1940 there were thirty-two squadrons of Hurricanes and only nineteen squadrons of Spitfires.  They looked similar but there were differences between them and they complimented each other and worked closely together to shoot down enemy aircraft and rule the skies.   The swifter Spitfires were best for engaging the Luftwaffe’s fighter planes like the Messerschmitt, whilst the Hurricanes took on the fleets of bombers like the Junkers and Heinkels.

I can tell the difference between them quite easily because when I was a boy I used to like making model aircraft from Airfix self-assembly kits.  The Spitfire was much better looking with sleek elliptical wings, a slim body and a long raking nose.  The Hurricane was chunkier with a higher cockpit and stumpy little wings.  My first Airfix kit was the Hawker Hurricane and I have to say that for no other reason than this after that it was always my favourite of the two.

I used to buy my Airfix kits from a shop in Rugby called Moore’s Handicrafts which was a DIY and hardware shop but I wasn’t especially interested in the tools and the key cutting service because I liked the train sets and the Scalextric and the Airfix Models but also the little packs of balsa wood that I would buy for 6d or 1/s with real genuine construction optimism and then take it home and inevitably make a modeling disaster! 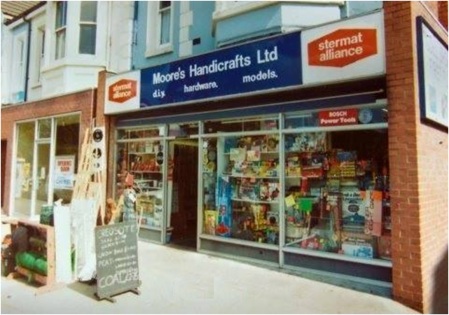 In the beginning Airfix was sold in F.W. Woolworth & Co. Ltd. for two shillings (that’s 10p today) and the first in the range, in 1952, was a very small scale model of Francis Drake’s ship the Golden Hind.  It was so successful that Woolworths than began to ask for additions to the range and soon Airfix began to produce more polybagged model kits.   The famous duck-egg blue Spitfire model appeared in April 1953.

An Airfix kit was notoriously difficult to assemble and the only absolute certainty was that once it was finished it definitely wouldn’t look anything like the picture on the box.

Getting the fuselage and the wings snapped together was usually a fairly straightforward procedure but things quickly became increasingly complicated after that, with fiddly little bits and pieces that required huge dexterity, great precision and unnatural amounts of patience to position into exactly the right place.

I was often a bit over eager at this stage and would prematurely glue the obvious parts together without reading the instructions properly and then realise that some of the fiddly bits needed to be planned for and carried out before the larger parts were put together.  Two good examples of this were the propeller on the Spitfire and the tail gunner’s position on the back of the Lancaster bomber which would only turn or swivel as intended if placed in position before permanently attaching the fuselage section together.

What made things especially difficult was the Humbrol plastic cement glue with its curious smell and a nasty habit of exuding the tube nozzle in far greater quantities of stringy ooze than you could ever possibly need for such a delicate operation would end up in sticky white flakes on the end of your fingers or big dollops on the dining room table that would strip the varnish off and end up in a good telling off.

I always found the gluing together part of the operation especially tricky when finally putting the cock-pit window into position at the end and my model was always left with smears on the plexi-glass that if this was a real plane would have made it virtually impossible for the pilot to see where he was flying or to shoot down any enemy aircraft.  And thinking about the pilot, one of the most irritating things was to discover that I had got the cockpit in place and the whole thing finished before I had placed the pilot into his seat and there he was rattling around in the bottom of the box along with all of the bits of discarded plastic and the double sided page of incomprehensible assembly instructions. 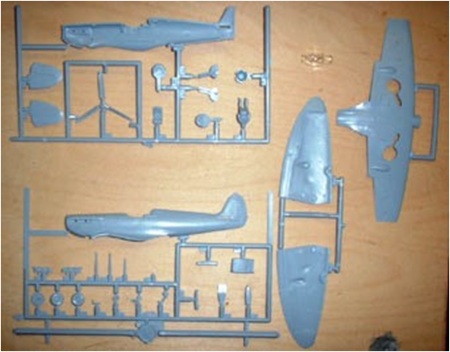 After the gluing together stage came the painting and this was an equally messy affair with paint dribbling down the fuselage, bits of wool off your pullover and hair getting stuck on the model and fingerprints in various places where I had tried in vain to rectify the damage.  Most of this was a consequence of the fact that I was naturally impatient.  Paint came in little tins and it was sensible to let one colour dry before applying the second but I rarely had enough time for that which mostly led to disastrous results.

Finally there was the delicate process of applying the decals which had to be separated from the backing paper by soaking in water and then requiring a most delicate touch to slide them carefully into position on the fuselage and the wings.  Sometimes if I was lucky they could be used to cover up the dodgy paintwork but mostly they would end up on first contact in the wrong place and crease and tear as I tried to correct the error.

I finished the Hurricane and the Lancaster to some sort of messy sub-standard but I can recall making such a catastrophe of a bright red Westland Lysander that as soon as it was completed I was so ashamed of it that I immediately consigned it to the waste bin.

Airfix model aircraft were an important part of my childhood in the days before computer games and a really significant thing about Airfix was that it taught important life skills like reading assembly instructions that were as deeply impenetrable as the Amazon rainforest and which were useful later in life for dealing with flat-pack furniture assembly.

This was a popular DIY magazine from 1956…

Twenty-five years later I had my own house and my first tool kit and carried away with optimistic enthusiasm I bought a weekly DIY magazine in ninety-eight weekly parts called ‘The Knack’ costing 55p each issue which was over ten times as much as the ‘Practical Householder’, I should really have remembered how bad I was in woodwork lessons at school and not wasted my money.  I think I threw them away eventually.

An Airfix kit was notoriously difficult to assemble and the only absolute certainty was that once it was finished it definitely wouldn’t look anything like the picture on the box.

Getting the fuselage and the wings snapped together was usually a fairly straightforward procedure but things quickly became increasingly complicated after that, with fiddly little bits and pieces that required huge dexterity, great precision and unnatural amounts of patience to position into exactly the right place.