Yorkshire – Harrogate, The Poshest Town in North of England

Harrogate is a nice town. It is consistently voted as one of the best places to live in the UK and in 2014 a poll of forty-thousand people found that Harrogate was the happiest place to live in the United Kingdom for the second year running. Interestingly the ten most unhappy places were all in Greater London.

We had arranged an overnight stay in Harrogate because we used to go there regularly every year to the Institute of Housing Annual Conference. This was an annual event when Housing professionals from all over the country would get to together to enjoy corporate hospitality, drink too much and generally collectively misbehave – and to go to some conference lectures of course.

We had regularly stayed in a guest house, the Welford, close to the town centre so we thought that we might reprise our visits.

We drove past Knaresborough which is an interesting place noted mostly for the tourist attraction Mother Shipton’s Cave which claims to be the oldest visitor attraction in England and where visitors leave odd items of clothing, like a tie or a bowler hat or a bonnet and the drip, drip of the limestone infused water eventually calcifies the item and turns it to stone. It takes a long time of course and I have always wondered what the point is of leaving something that you can never go back and collect within your own lifetime! We had been there before so we didn’t feel as though we were missing anything today.

Harrogate is a nice town. It is consistently voted as one of the best places to live in the UK and in 2014 a poll of forty-thousand people found that Harrogate was the happiest place to live in the United Kingdom for the second year running. Interestingly, even with obscenely spiraling property values, the ten most unhappy places were all in Greater London.

And Harrogate is posh, seriously posh. It is the only place north of the M25 where the residents unashamedly (and with some justification) consider themselves to be socially superior to people in the South in places like Surrey and Hertfordshire.  When I was a boy I can remember my Grandmother speaking about Harrogate even then as though it was a sort of mystical Shangri-La!

After we had settled in we sat in our room and watched the sky cloud over, white, grey and then black and then it rained and I remembered that this is another good reason why I generally prefer to go to Spain or Greece for a few days away.

Kim went to a mini-market that we remembered around the corner and I settled down to some research.  Two pieces of trivia lodged in my brain.  In 1926 the author Agatha Christie mysteriously went missing from her home in Berkshire and was discovered ten days later in Harrogate at the Old Swan Hotel where she was staying under an assumed name.  So, posh person from Sunningdale chooses to disappear for a while in up-market Harrogate!

Secondly, and this is my favourite, in 1982 the twenty-seventh Eurovision Song Contest was held and broadcast from the Harrogate Conference Centre.  I had time to do this research because Kim took longer than expected and when she came back she reported that the shop had gone and was now a block of posh flats!

After a couple of hours it still hadn’t stopped raining but we were getting hungry now so there was no putting off going out for something to eat and we stepped out into the dreary streets and made our way to a restaurant we knew and liked. It wasn’t there any more, it had changed hands and anyway it was closed so we walked into the town and I remembered another reason why I prefer to go to Spain or Greece for a few days away. In contrast to a Spanish Plaza Mayor the town centre was deserted, just a few youths on skateboards outside McDonalds and some sad smokers in pub doorways sheltering from the drizzle.

This is a sad feature of English towns where once the shops close at about five o’clock everyone goes home and the main streets are abandoned as though someone has declared a national emergency and everyone has hurried away. In fact, in England most people are suspicious of anyone who wants to stay in a town centre after six o’clock and will happily call the police to investigate if they spot someone hanging around.

Before moving to Grimsby I lived in the small town of Spalding which had a great number of Eastern Europeans living there. It turns out that Poles and Latvians rather enjoy going to the town centre to meet friends in the evening but the residents of Spalding found this difficult to come to terms with and were forever complaining about foreigners in the market place because they considered this to be un-English, unnatural and perverted.

And so we made our way to the Drum and Monkey, a pub with a restaurant that specialises in fish and sea food and we had a fairly good, but rather overpriced meal but they didn’t want us hanging about for too long and after we had finished they declared that they were closing for the night and they would rather appreciate it if we would hurry up with our last drinks and be so good as to move on.

It was still raining outside but this hadn’t stopped the skateboarders from riding up and down or forced the smokers inside and we were left feeling disappointed with Harrogate and made our way back to the guest house and an early night. 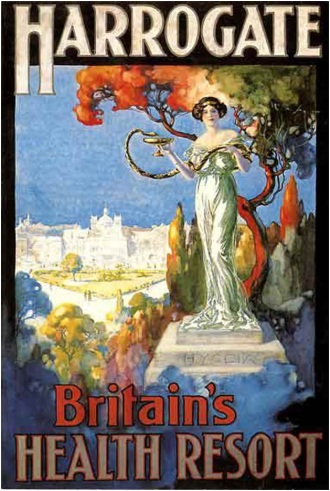