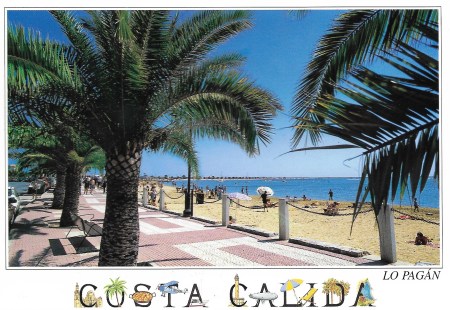 ““Do you like that?” I’ll say in surprise since it doesn’t seem like her type of thing, and she’ll look at me as if I’m mad.  That!?” She’ll say, “No, it’s hideous” “Then why on earth,” I always want to say, “did you walk all the way over there to touch it?”  but of course…I have learned to say nothing when shopping because no matter what you say…  it doesn’t pay, so I say nothing.”  Bill Bryson – ‘Notes From a Small Island’

It was our final day at my sister’s place on the east coast of Spain and it looked very much as though the sun was going to make a reappearance so after breakfast we drove south into the Province of Murcia, the Costa Calida and the resort town of Lo Pagán.

On the way we drove past salt water lagoons, separated from the sea by a narrow strip of land and now a site of carefully managed and intensive salt extraction.  It turns out that this is the biggest and most important site for sea salt production in all of Europe.  I didn’t know that!  The flamingos did and there were flocks of hem paddling about in the shallow water and expertly fishing for salt water shrimps! 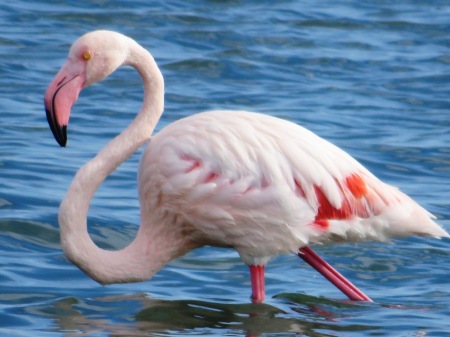 It reminded me of what else Spain is famous for (other than flamenco, bullfighting and El Cid).

Next – Serrano Ham because go to Extemadura in the west and you will drive through fields of grazing Black Iberian Pigs gorging themselves on acorns in preparation for being turned into the Spanish gastro specialty, Jamón ibérico. Iberian ham products are processed throughout Extremadura, making this region the country’s leading producer and in a sparsely populated region about a million hectares of open range are used by over one thousand-five hundred livestock breeders.

One of the fascinating things about the world’s great food it seems is the way they are a product of geography and Spain is a classic example, salt from the Mediterranean, Olives from the sun baked plains of Andalucia,  Jamón ibérico from Extremadura and Rioja wine from the vinyards of the north. 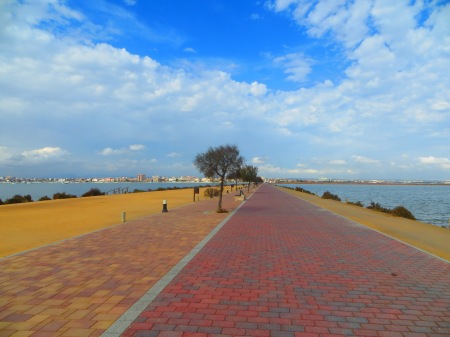 I didn’t know what to expect of Lo Lo Pagán, would it be stylish like Alicante or utilitarian like Torrevieja?  As it turned out it was somewhere between the two, leaning towards Alicante I would say.  We stopped for a beer as the sun burned through the thinning cloud and then walked along a causeway which extended a mile or so into the lagoon.  It was a lovely walk in the weak sunshine with statuesque flamingos on one side and see-sawing fishing boats on the other.  At the end of the causeway there was a pumping windmill, idle today, but nothing else except an opportunity to look out to sea before turning around and walking all the way back.

The weather was good and I was almost tempted to suggest a swim in the sea but I could tell that no one else would be terribly enthusiastic about that so I said nothing and we returned to the car and drove to a shopping centre at La Zenia.

I am not a big fan of shopping as you know and fortunately neither is Mick so we left Kim and Lindsay to browse the shops and we went for a beer and a bocadillo!

In the late afternoon it started to rain, just a little drizzle, but we didn’t mind it was our last afternoon and evening and next morning we would be returning to English drizzle anyway.

It had been a good few days in Spain especially because I was able to confront some of my prejudices about the Levante region of Spain.  I have to say that it is unlikely ever to become my favourite but I was able to scrape away at the surface of ex-pat life and appreciate some of the heritage and history of the region and I look forward to going back again! 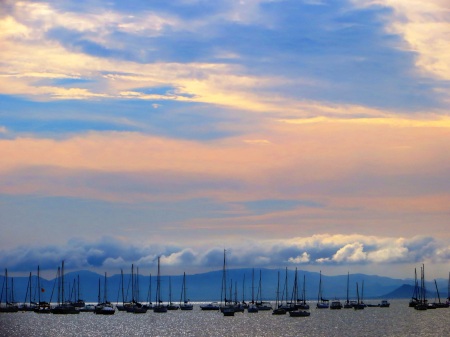 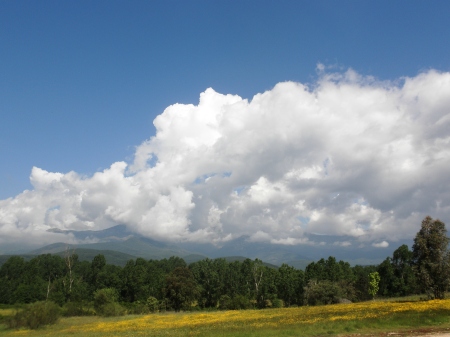 Extremadura is an unspoilt part of the country made up of lush forests and majestic mountains, far removed from Spain’s crowded Costas both in terms of distance and character. It is one of the most sparsely populated regions of Spain, roughly the size of Belgium, and its distance from the coast has kept mass tourism at bay and relatively few visitors, either from Spain or elsewhere, venture to this western region of the Iberian Peninsula, sandwiched between the mountains of Portugal and the wide central plains of La Mancha. 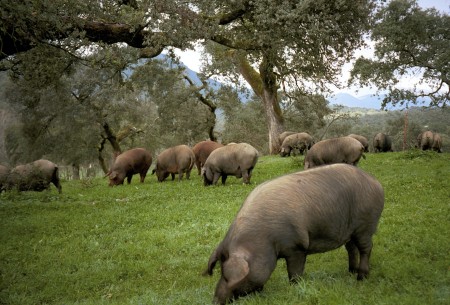 One of the fascinating things about the world’s great food is the way they are a product of environment, geography and history combined into one mouthwatering gastronomic experience. The western provinces of Spain are a good example. About eight hundred years ago, it was decreed that every village would be responsible for maintaining a mixture of grass, for grazing; cork trees, for firewood; and holm oaks, for shade, building materials and acorns.  This woodland prairie, in effect a man-made ecosystem, once covered 90% of the region and while it is now much smaller, the dehesa, as it is called, still provides one of the world’s greatest hams: jamon iberico de bellota.

Bellota means ‘acorn’, and it so happens that the native black-hoofed pigs are remarkably fond of the vast piles of nuts that fall each autumn from the branches of the holm oaks.  At this time of year, the cattle and sheep are shut away, and the pigs are turned loose to roam, snuffle and above all eat to their heart’s content. After two months of devouring up to ten kilograms of acorns a day, they roughly double their body weight.  They get so fat that they have to be neutered because the females are too overweight to be able to run away from the wild boars who would otherwise come down from the mountains to shag them and in the process compromising the purity of the breed.

In winter the pigs are slaughtered and the legs cured with sea salt. Remarkably, though, the fattest animals are not yet even halfway through their journey from sty to plate. The acorns on which they have been feeding are rich in oleic acid, the same fatty acid found in olives and iberico pigs are sometimes called “four-legged olive trees”.

This in turn means that their meat can cure for far longer than ordinary hams, from eighteen months to two years or even more and during this time, a kind of reverse fattening process happens and the leg loses up to half its original weight, but acquires a depth of flavour unmatched by any other ham.

It is sold with its black hoof still attached, as an indication of its origins, it is kept on a special stand and carved into the thinnest of slices, to be served with a couple of eggs for breakfast, as evening tapas with a glass of salty fino sherry, or as a light lunch with crusty country bread and a little manchego cheese. The colour is a deep ruby red, the texture is dense and chewy quite unlike a silky, sticky slice of, say, prosciutto di Parma and the taste is characterised by a rich, nutty sweetness that gives way to a lingering finish, like old wine.

Not all jamon is de bellota however and there are various grades and the hams are labeled according to the pigs’ diet. 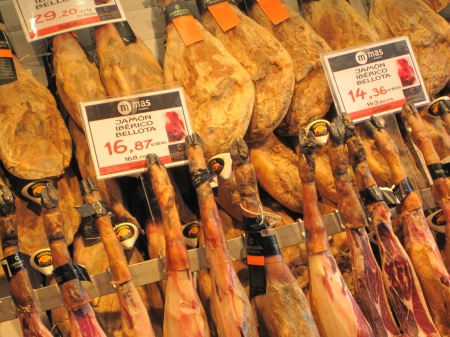