Sicily – The Triskelion, The Moor’s Head and the Godfather

First thing in the morning we walked through the maze of streets to the daily market.  I always assume that purchases in a street market are going to be cheaper than going to the shops but this almost never the case.

I estimate that we at paid least double the price for produce than if it had been in a supermarket but if there was one nearby then we didn’t know where it was.  Kim has a theory that there is one price for locals and another for tourists and I think she may well be right.  We bought some cheese, meats, sun dried tomatoes, bread and salad and paid well over the odds but we weren’t unhappy about that and made our way back to the apartment to prepare a late breakfast that we enjoyed on the balcony.

After breakfast we walked back out again.

I had been to Sicily before but hadn’t taken a great deal of notice of the flag of the Italian autonomous region which is a three legged woman very similar to the symbol of the Isle of Man.  This symbol is called the Triskelion and is the head of the  Gorgon Medusa with the three legs that alludes to the triangular shape of the island.

In Ancient Mythology, the Gorgon was a mysterious creature who was one of the three daughters of two Gods of the sea. The Three daughters were Medusa, Stheno and Euryale.  Medusa was mainly known for her ability to turn mortal men to stone with one single gaze but, on a lighter note, was also known for her help to fight the forces of evil.

So is there a connection between Sicily and the Isle of Man?  Here is a short history lesson that may provide an explanation…

In 1250 Holy Roman Emperor Frederick died after having ruled Sicily for fifty-two years.  Four years later the Pope passed the Sicilian kingship to Edmund Crouchback, the second surviving son of Henry III, King of England  and for about ten years after that  Edmund was King of Sicily.

The wife of Alexander III, King of Scotland, was Margaret of England, a daughter of King Henry III and some historians believe that this connection between the English and Scottish royal families might account for the introduction of the triskeles as a symbol of the Isle of Man and may well be connected with the regime change on the Isle in 1265  to Scottish kings.

There you have it.  History lesson over. 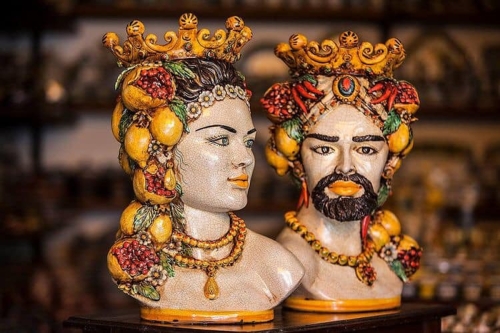 The next Sicilian story that I liked is the grisly tale of the Moor’s head.  The tourist shops are overflowing with souvenir vases depicting the face of a man wearing a turban, depicting the East, and a woman with a crown, representing the west. Both are embellished with jewellery, flowers and citrus fruits.

Not the sort of thing that I would buy to be honest and they wouldn’t fit in my flight  hand luggage anyway.

There are various stories about the heads but this is my favourite.

The legend says that during the time of the Moor occupation in Sicily there lived an exceptionally  beautiful girl in the Arab quarter of Palermo whose passion was to take care of plants on her balcony. One day she was noticed by a Moor who immediately fell in love with her and she apparently immediately felt the same way and they embarked on a whirlwind romance. When the girl found out that her lover would soon travel back to the East where a wife and children were waiting for him she was overcome with jealousy and grief.

Here are the two star-struck lovers…

I think that she looks rather like Sophia Loren…

Humiliated by the betrayal, in a fit of jealous anger the girl murdered the Moor while he was asleep. She cut off his head and used it as a vase in which she planted a bud of basil (I assume at this point that she scraped the brains out and replaced them with John Innes potting compost number two or something equally suitable).  The girl watered the plant with her tears and, as time went by the basil grew into a luxurious plant. The heady scent of the plant caused the envy of the girl’s neighbours who immediately ordered ceramic vases with the same features as the Moor’s Head to decorate their own balconies and courtyards.

It is similar to the story told by John Keats in his epic poem “Isabella and the Pot of Basil” which also has the unlikely story of the fragrant herb growing in a decapitated head.

Another thing that Syracuse is famous for (as all of Sicily)  is puppets.  This is The Opera dei Pupi where puppets represent Knights from the time of Charlemagne and puppeteers stage elaborate stories and epic battles in puppet theatres.  There was a museum directly opposite our apartment but for some tantalising reason was never open which was a shame.  To compensate it was possible to visit a couple pf workshops where skilled craftsmen were designing and creating the puppets.

Some speculate that the legend of the puppet master is behind the symbolism of the explanation by the logo of the film trilogy “The Godfather”.

And so my A to Z of statues comes to an end.  Z is for a statue of the Roman God Zeus in the Piazza Navona in Rome… 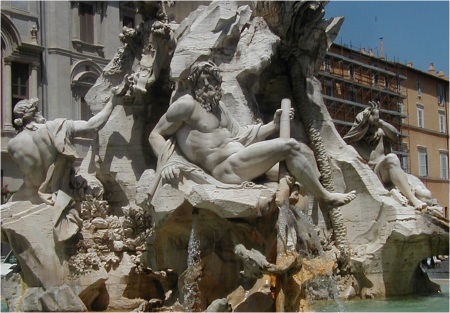 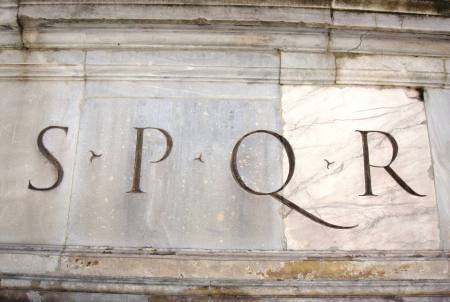 I liked everything about Rome and all of these sights but I was intrigued by something much more mundane.

All of the manhole covers displayed the Roman symbol SPQR which, I learned later, is the motto of the city and appears in the city’s coat of arms, as well as on many of the civic buildings.  SPQR comes from the Latin phrase, Senātus Populusque Rōmānus (The Senate and the People of Rome), referring to the government of the ancient Republic. It appeared on coins, at the end of public documents, in dedications of monuments and public works, and was the symbol on the standards of the Roman legions.

Our plan was to spend two days in Rome and today we would visit the northern classical part of the city and the areas that are predominantly Renaissance and Baroque in architectural character and we would leave Ancient Rome of the Emperors and the Gladiators until the following day.

Sorrento, Gladiators and Cardinals, a day in Rome

It was about a two hundred and fifty kilometre drive to Rome which took just over three hours and with a full day to pack in the coach picked us up before breakfast so we collected food parcels and set of for the Italian capital, which is the third most visited European city after London and Paris.  The coach took the road towards Naples and then swung around the base of Vesuvius and picked up the A1 Autostrada that runs all the way from Naples to Rome and then on to Milan.