Travels in Spain, Body Art on the Streets of the Barcelona Gothic Quarter 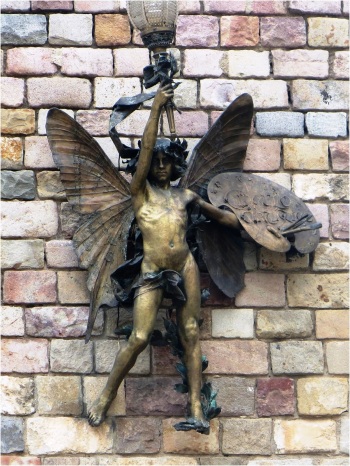 Travels in Spain, Eixample and the Gothic Quarter in Barcelona

“Most visits to Spain are trouble-free, but you should be alert to the existence of street crime, especially thieves using distraction techniques. Thieves often work in teams of two or more people and tend to target money and passports.”   British Foreign Office Advice

The modern parts of Barcelona are a triumph of urban planning.  We were staying in the Eixample district which was planned and built about one hundred and fifty years ago by a man called Ildefons Cerdà and is characterized by long straight streets, a strict grid pattern crossed by wide avenues and square blocks with chamfered corners all of which means that the traffic always flows freely in a slick one-way system and it is easy to navigate on foot.

Eixample, rather unimaginatively, simply translates as ‘expansion district’ and was developed when the old town of Barcelona became too small and overcrowded, the medieval city walls were demolished and the city overflowed like a river bursting its banks.  This is where to visit the Sagrada Familia and the modernist architecture of Antoni Gaudi but today we turned our backs on this and found our way to the old town and the Gothic Quarter. 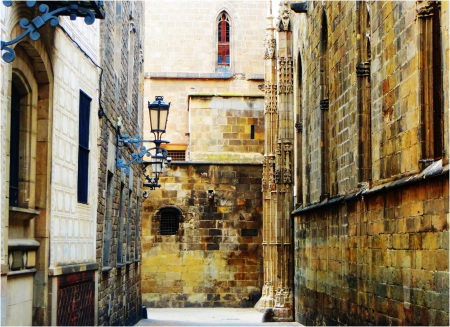 I mention these details about Eixample because the old town of Barcelona is a complete contrast with a maze of winding narrow streets with soaring buildings that block out the sun, where laundry hangs out to dry, shutters are thrown open like butterfly wings and  balcony gardens are stacked in the sky.

This is where to find sections of the original Roman Wall, the Jewish Quarter and the Cathedral of the Holy Cross and Saint Eulalia which although now eclipsed perhaps by Gaudi’s Sagrada Familia is the one true Roman Cathedral of Barcelona.

It is quite a nice but these days I am beginning to agree with Kim that all Cathedrals tend to be rather similar and instantly forgettable once back outside the front door so I have become interested instead in the stories of the Saints who are commemorated in these places and this I think is a good one.

By the way, if you are squeamish about torture, mutilation and murder you might want to close your eyes, skip this part of the post and go straight to the next picture below.

Saint Eulalia was a thirteen year-old Christian girl who suffered martyrdom in Barcelona during the persecution of Christians in the reign of Emperor Diocletian as a consequence of refusing to renounce her faith.

The Romans subjected her to thirteen tortures…

Eulalia must have been really tough cookie because even after all of this she was still alive so they finished the job by cutting off her head.  A dove is supposed to have flown from her neck following her decapitation and that is why the Cathedral keeps thirteen white geese (one for each of the tortures) in the cloister in memory of her.  Geese because doves fly away I guess.

After the Cathedral we strolled slowly to the sea front and the modern marina and then headed back to the centre along the iconic La Rambla. 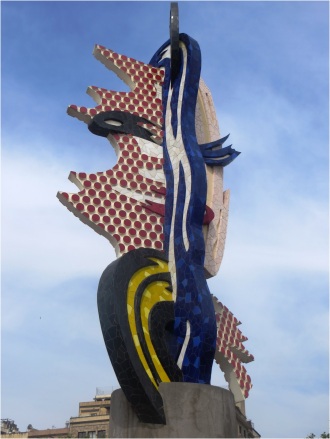 La Rambla is a riot, an eclectic mix of sights and sounds which easily strays from modern to medieval and back with impressive ease.  Here are the boutiques and tourist shops, the street statues and entertainers, the tapas bars and souvenir stalls but alongside them are the market stalls and animal livestock sales which would appear to be more appropriate to a shopping experience in the Middle Ages.

Barcelona has a reputation for being the pick-pocket capital of Europe and La Rambla is certainly a place to keep a firm grip on your wallet.  As it turned out we didn’t need Santa Eulalia to look out for us because we had Kim.  Ever since being robbed on the Athens Metro she is always suspicious and ever  alert to danger and paced out La Rambla with eyes swiveling left and right, up and down like Liam Neeson after four shots of double espresso and forever heeding her warnings we successfully negotiated the walk from south to north before arriving safely back in Plaça Catalunya and what had become our favourite lunchtime café. 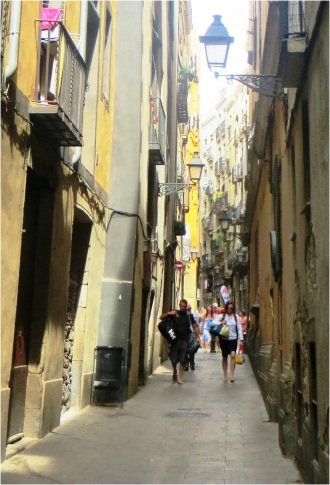 Saint Janurius and the Miracle of The Blood