Postcard From The USA – Lake Powell and The Glen Canyon Dam

Lake Powell is a man-made reservoir on the Colorado River on the border between Utah and Arizona and is the second largest man made reservoir in the United States after Lake Mead, it stores thirty cubic kilometres of water when full.  It was created by the flooding of Glen Canyon by the construction of the controversial Glen Canyon Dam, which also led to the creation of Glen Canyon National Recreation Area which is a popular summer destination for tourists.

The reservoir is named after the explorer John Wesley Powell who explored the full length of the river in three small wooden boats in 1869.

Construction of the dam started in June 1960 and the last bucket of concrete was poured and smoothed over in September 1963.  Over four million cubic metres of cement were used to create  the dam which is two hundred and sixteen metres  high and cost a hundred and fifty five million dollars and eighteen lives to build, which was a lot less than the one hundred and four deaths that were caused by the construction of the Hoover Dam further down river thirty years earlier. 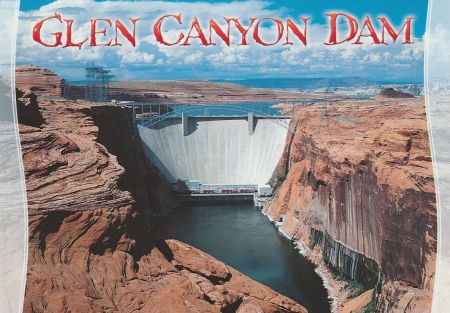 The dam has always been controversial, many opposed its construction in the first place, some associated with the decision to build it now think that it was a mistake because it has spoilt the environment and the Glen Canyon Institute is an organisation which even today continues to advocate for decommissioning.

We visited the dam and walked from the visitor centre to the other side of the gorge and then we took the elevator down inside the dam to view the hyro-electric generators.

Back on top the sun was coming out now and we took the short journey into the town of Page for lunch.   Page is a new town that was created in 1957 to house workers and their families during the construction of dam and the site was obtained by the government in a land exchange with the Navajo Indian tribe.  I hope they had their wits about them during the negotiations and didn’t get fobbed off with somewhere useless!

There was not a great deal to hang around for in Page and after lunch the coach took us over the Glen Canyon Dam bridge which is over a thousand feet long and about seven hundred and fifty feet above the Colorado River.  Before the bridge was built it was an almost two hundred mile drive drive to the other side of the canyon.  Over the bridge we followed a road along the western side of the water and stopped off soon after to take a cruise on the lake from the Wahweep Marina.

This is easily the  best way to see Lake Powell because most of the features that define the lake,  the sheer cliffs, intricate narrow gorges, twisting canyons and towering mountains are inaccessible from the road and the shoreline and can only be fully appreciated from the water.  It was only a short cruise but it was fabulous because the sun was shining and the water was a calm but vibrant cerulean blue and the boat took us close to the marbled rocky sides of the lake and into the narrow canyons beyond.

I am not sure about the debate over whether creating this lake was the correct thing to do or not but today I simply enjoyed the experience of cruising over the water bathed in sunshine under a big blue peaceful sky.

After returning to dry land we boarded the coach for the journey to the city of Kanab which was over the State border into Utah.  The scenery was as barren and empty as it had been all day and it was less dramatic than it had been earlier in the trip and we were looking forward to arriving at our destination and getting the beer out. 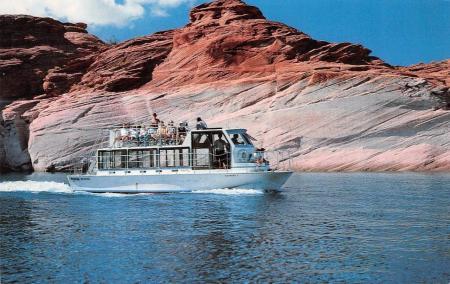