The Little Chef All Day Breakfast 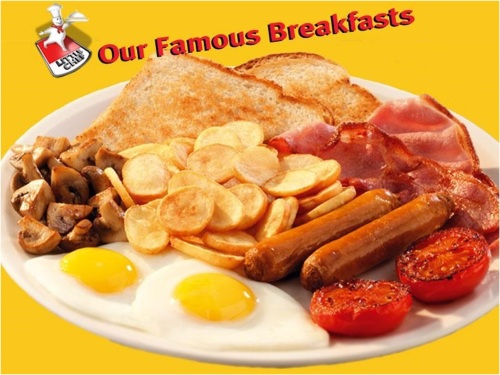 “Little Chef had its roots in the days before Britain had a motorway network, in fact, there are some who believe that our motorways were built primarily to join up all the Little Chefs.” The Caterer.

My Mum likes to tell a story about how as a boy I was a really fussy eater. It might be true. I do know that my own son was a terribly fussy eater. Once on holiday in Portugal in 1994 I had to take him every night to the same bar for a cone of boiled rice and a Pingu ice cream because it was all that he would eat.

This is a Pingu ice cream…

Getting him to eat was a real challenge but the one place he did like was the Little Chef Roadside Diner at Little Eaton near Derby so in desperation and before he wasted away completely we used to take him there now and again for his favourite meal of chicken gougons and French fries.

This is the Little Chef Diner at Little Eaton.  It was an old farmhouse with character.  It is a Starbucks now…

In 2000 there were almost four and fifty branches of Little Chef across the UK and Ireland. Barely fifteen years later there were just 70. Now there are none. The brand simply went out of fashion.

The relationship between driving and eating can be traced back to the economic boom of the 1950s. People had more money to spend, they had cars, they had time to spare, and they were taking inspiration from American culture and heading out on a road trip. What better place to stop for a meal along the way than an American style diner.

The first Little Chef opened in 1958 and restaurants appeared by the side of main roads nationwide and managed to convince families that their cheap, no-nonsense menus would be better than going to the bother of preparing a picnic.

This is a Petcher family picnic in 1959… 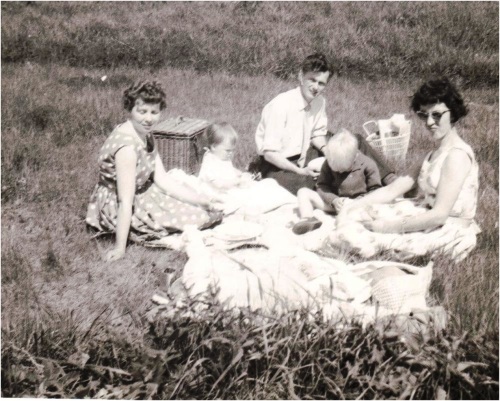 Little Chef was most famous for its all day breakfast which thanks to a standardised corporate menu was pretty much similar in all of the restaurants. If you went for a breakfast then you knew exactly what you were going to get.

The basic breakfast was two rashers of bacon, a pork sausage, two free-range eggs, mushroom, sauté potatoes, griddled tomato, Heinz baked beans (specifically Heinz as though this was some sort of gourmet ingredient) and two slices of toast or fried bread. For some reason a slice of black pudding cost extra. I have never really understood why, it is the same today if you buy a breakfast in Wetherspoons, you have to pay extra for black pudding.

This was most likely a rather unhealthy breakfast but Little Chef had a reputation for serving big calorific meals. The company logo was a cheerful looking chef unashamedly called Fat Charlie.

Some studies have shown the health benefits of eating breakfast. It improves energy levels and ability to concentrate in the short term and can help with improved weight management. That may be so but breakfast means means a morning meal, which literally means to break the fasting period of the prior night. I am not so certain therefore that an ’all day breakfast’ meets the healthy criteria..

A couple of weeks ago I recreated the classic Berni Inn three course favourite of prawn cocktail, steak garni and Black Forest Gateau and this week I made an attempt at recreating the Little Chef all day breakfast.

Two rashers of good lean unsmoked bacon (I am not a fan of smoked food of any sort), one Lincolnshire pork sausage (it has to be Lincolnshire of course), just one egg because one egg is enough, sauté potatoes, grilled tomato, baked beans (served on the side because I don’t like baked bean juice all over the plate), a slice of Lancashire black pudding (at no extra cost) and some toast.

And here it is…

Posted in Childhood, Europe, Growing up in the 1950s, History, Travel, United Kingdom