On This Day – Guardamar del Segura and a Deadly Storm

While the current travel restrictions are in place I have no new stories to post so what I thought that I would do is to go through my picture archives and see where I was on this day at any time in the last few travelling years.

On 25th April 2017 I was in Spain and took a walk to Guardamar del Segura.

The Casas de Babilonia are a string of fishermen’s houses built in the 1930’s perilously close to the beach and to the sea and over the years the advancing Mediterranean has nibbled away at the fragile infrastructure and undermined the inadequate foundations. 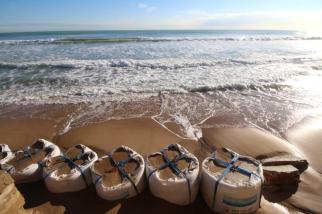 Travels in Spain, Guardamar After The Storm

I visited Guardamar del Seguera in November last year and was delighted to find traditional fishermen’s houses built close to the sea with tiled balconies and coloured shutters, ‘listed‘ buildings and a historical community with a close and obvious affinity with the sea.

What a good job that I saw this proud ex-fishing community when I did because when I went back this time, just four months later it was almost unrecognisable, nearly gone, the victim of changing coastal dynamics, the battering ram of the sea and a wild Mediterranean Storm on 12th December 2016 when twenty foot high waves crashed into the decaying properties and did massive amounts of damage, washing away walls, tearing down terraces, breaking beams, trashing tiles and crushing concrete.

The Casas de Babilonia are a string of houses built in the 1930’s perilously close to the beach and the sea and over the years the advancing Mediterranean has nibbled away at the fragile infrastructure and undermined the inadequate foundations.

The owners seek State aid in dealing with the storm damage and providing protection for the future but the houses are now retrospectively declared to be illegal builds that contravene the Spanish Coastal Law (ley de costas 1988) that defines a public domain area along the coast and a further zone beyond that where special restrictions apply to private ownership.

The aim of the law is to make the whole length of the coastline accessible to the public and to defend the coast against erosion and excessive urbanisation and the Casas de Babilonia are in the front line of the debate because the front of these properties presents a barrier to public access. 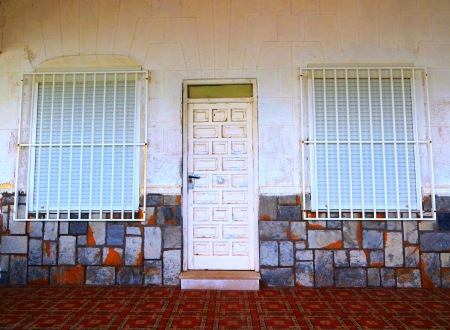 Not that we noticed because there was a promenade all along the front and in front of that a wide caramel coloured sandy beach without any restrictions to the public.  Call me cynical but it seems like an official ploy to deny responsibility or funding because putting things right here is going to cost a fortune and may well be completely unaffordable.

Anyway, as it happens, this may all well be academic because the December storms and the wrecking ball of the sea began a demolition process that may now be impossible to reverse and even though the owners have vowed to raise the money required for new defences it seems to me that this is hopelessly optimistic and within only a short time these ‘listed‘ buildings will surely give way to the inevitability of the awesome power of the sea. 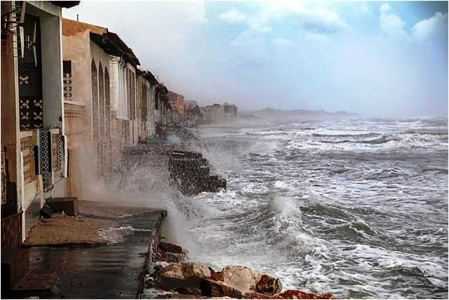 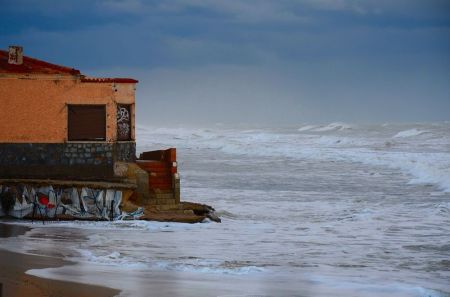 Today, these special properties represent a breakwater against the Mediterranean, without them, the water will penetrate further inland and take away even more of the land.

These are some pictures of the storm damage… In a way this reminded me of seaside holidays when I was a boy and we used to go to a cottage at Seaview Crescent at Walcott on Sea in Norfolk.

It was a crescent sure enough and every year that we went there were a few cottages missing as they had fallen over the cliff into the sea during the winter storms.  Luckily ours, which was owned by a man called Mr Bean (he was an old man and dad used to call him Mr has-been – well, he thought it was funny) was furthest away from the cliff edge so each year before we left mum and dad could always book a week there the following year with some degree of confidence. 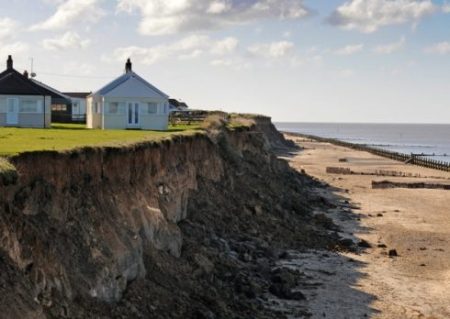 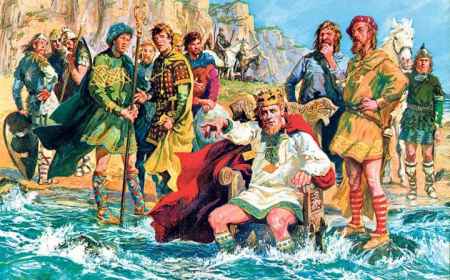 The storm did more damage than demolish the historic houses and a walk a along the beach showed just how much sand had been gnawed away, cruelly stripped by the rip-tides and abducted out somewhere into the Mediterranean.  A three foot high shelf is evidence of how far the beach has dropped and how much void there is for the sea to fill.

In just four months I could see that there is much less breakwater between the water and the sand dunes and now the sand is decorated with debris from the storm.

And Guardamar has other natural problems to deal with as well.  At the back of the beach is a linear park of palms and cactus and succulents and these are withering away and dying back as they struggle to fight some sort of pest or disease which one by one is killing the trees and plants that (I am told) once provided a stunning green park for visitors to wander amongst.  Such a shame.  A warning of just how ‘temporary’ life can be on Planet Earth!

Not anymore however because these are all now fenced off with warning signs of Paseo Prohibito!

Sardinia, A Ghost Town and a Cyclone

It was grey in the morning. Very grey. Very grey indeed. So there was no reason to stay long in Stintino and instead of hanging around for the day as we had originally planned we set off immediately on the next stage of our journey to Alghero.

In view of the weather there really wasn’t much point in going directly to Alghero either so we studied the map and identified a couple of places on route that might be worth taking a look at on the way.

Under steel grey skies, the colour of battleships, we drove south until we took the turn for the village of Argentiera and headed towards the coast and took a soaring, sweeping road  that reached as high as the lowest cloud that finished at a dead-end at the abandoned works of an old silver mine because Argentiera is one of Italy’s estimated twenty thousand ghost towns and villages.

There are several reasons why Italy has so many abandoned villages, such  as harsh living conditions often without modern amenities and services, natural calamities such as landslides, earthquakes and floods and massive emigration flows triggered by the appeal of a better life in larger cities or overseas. Argenteria became a ghost town when its mining industry collapsed and closed for good in 1963, now just a handful of people live there solely to run a couple of bars for the tourists that occasionally drop by. 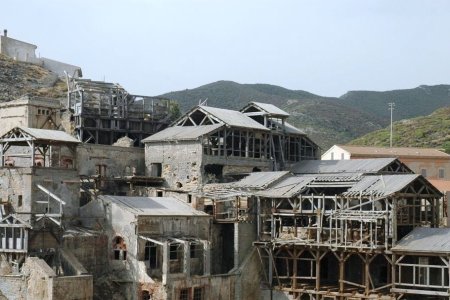 From the hills we dropped down into the town and drove through the neglected and pot-holed village piazza with a solitary defiant palm tree in the centre, along damaged roads next to bricked up houses and through the rotting, crumbling corpse of the old mine works.  In the fifty years since closure roofs have collapsed, timbers have split and splintered, windows have disappeared and metal has rusted and flaked away.

They say the village is haunted of course by all the miners who lost their lives in the harsh and dangerous conditions in which they worked tackling a seam of silver seventy metres beneath the ground and with shafts extending under the sea and the stories are embellished now by the creaking timbers and the cracking stones which contribute an eerie ambiance to the place.

The sky wasn’t grey any more, it was chalky white and the rain had slowed to a light drizzle so, living dangerously, we parked next to a collapsing cliff face and walked across the shingle beach to a small bar tucked in one sheltered corner and on a day such as this the young girl working there alone seemed pleased to see us and have some temporary company.  It was a curious place and it felt almost surreal sitting under cloudy skies, on a beach, drinking coffee in a completely abandoned village.

We left shortly after that and made our way next to Capo Caccia a few miles further south.  Capo Cacchia is an imposing limestone promontory about three hundred metres high and with good views in all directions.  There are some underground caves to visit but on account of the weather almost everyone else in the area had abandoned the beaches for the day and were looking for alternative entertainment and had chosen to come here instead.

Parking was a nightmare and we were forced to leave the car in a precarious position on the bend of a narrow road under a crumbling limestone cliff which was clearly regularly shedding lumps of rock and I naturally worried about that.  We might have visited the underground grotto but to get there meant negotiating six hundred and fifty  slippery and crowded steps so we collectively decided against it. 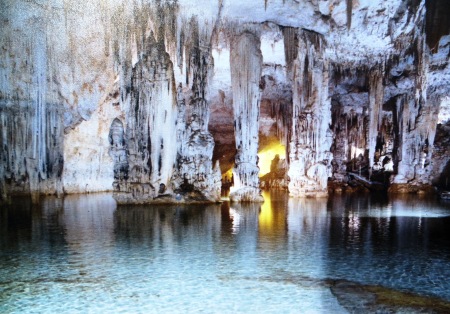 Secretly, I was glad about that decision and the opportunity to move the car and now we drove directly to Alghero and our seafront hotel where there was a lobby area full of damp and miserable people.

It wasn’t raining when we stepped out of the main door and began the one mile walk to the city centre but some people had been paying closer attention to the weather forecast than we had and all along the route we were pestered by lookie-lookie men who saw this as an opportunity to shift their stock of cheap umbrellas.  At some point during the morning the weather warning had turned to red (very serious indeed) a full emergency, apparently Sardinia was due to be hit by a cyclone sometime later in the day.

Yes, that’s right, a cyclone, a holidaymakers nightmare but a bloggers dream! 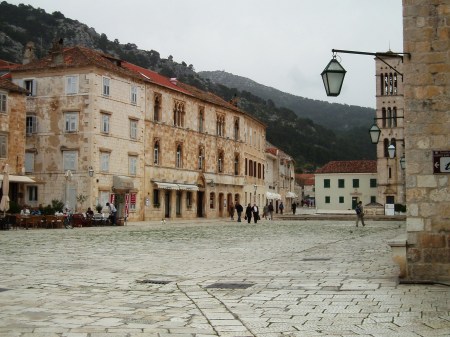 To be honest it was really quite miserable and the temperature was steadily dropping  and then as we sat at a street side bar it started to rain, only steadily at first but then it began to get heavier and we had to make a dash back to the hotel.

We were still unaware of the impending weather disaster when we went out for evening meal but luckily we only went across the road from the hotel because part way through the meal the storm out to the west hit land and brought with it howling gales, rain of truly biblical proportions and an electrical storm that created an entertaining light show over the hills of the interior.

The rain thrashed down, water flowed down the street and collected in puddles as big as glacial lakes, the angry sea thrashed itself into frothing foam like a good cappuccino and attacked the beach, the wind tugged at the plastic blinds of the restaurant and threatened to tear them permanently away from the metal frames, the lightning filled the sky and the thunder drowned out our conversation.  Any thoughts of leaving the restaurant to go back to the hotel were pointless because we would have been soaked through in seconds.

The restaurant staff told us that this was a Mediterranean cyclone and they are apparently quite rare as there have only been one hundred reported cyclones in seventy-five years.  The bad weather was likely to last for a day or two and everyone was quite disappointed by that.  I tried to cheer them up by suggesting that we were really very lucky because seeing a Mediterranean cyclone it seems is even rarer than seeing the Northern Lights and we had once travelled all the way to Iceland to see those.

My travelling companions however were not convinced.

Have you ever been caught in very, very bad weather?