My Holidays in Malta, Ferry to Gozo 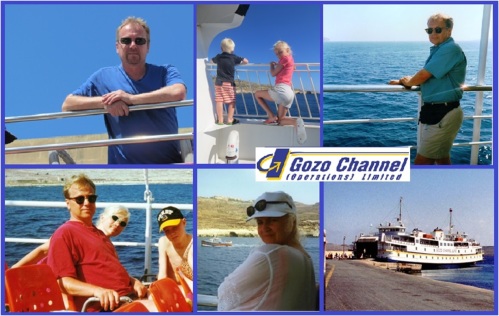 In 1997 I visited Gozo for the first time.  It is a short crossing and there had hardly been time to settle down in our seats on board when the ferry began to approach the port of Mgarr and began to slide into position ready at the quay side for disembarkation.

Mgarr was thankfully a lot more attractive than Ċirkewwa and in the shelter of the walls the iconic multi-coloured fishing boats of Malta were swaying idly in the limpid water of the harbour.

We wanted to go to the capital Victoria but the bus looked crowded and so, because I knew it wasn’t very far, I foolishly allowed myself to be talked into a taxi by a persuasive cabbie.

It was immediately obvious that a short ride to Victoria was the last thing he wanted and he was looking for a much more profitable fare.  He told us an improbable tale that the capital was mostly closed today so we would be disappointed and he suggested an escorted island tour instead.  He ignored our repeated instructions and set off instead on his preferred itinerary and towards the east coast village of Xaghra where he promised windmills and Megalithic temples.

The last thing my teenage children wanted were windmills and Megalithic temples but once there he made the mistake of stopping and letting us out for a closer inspection and it was now that we took our opportunity to be rid of him and we told him that we no longer required his services, paid, what I am certain was an inflated fare, and the with a collective sigh of relief looked for a bus stop.

It didn’t take long for a grey and red bus (grey and red to distinguish Gozo buses from the Orange of Malta) with the sun glinting off of its immaculate chrome bumpers to come along and we climbed on board past the heavily decorated driver’s seat which he shared with pictures of his favourite Saints and swinging rosary beads hanging from the window blinds, paid our fare and found some vacant seats.

The centre of Victoria turned out to be rather too busy for me but the quiet backstreets were shady and quiet and we wandered around the maze of alleyways until we re-emerged back in the centre, visited the cathedral and walked the walls and ramparts of the old Citadel with its fortifications and old cannons and explored tiny side-streets until it was time to make our way back to the bus station and return to the ferry port at Mgarr for a late afternoon ferry back to Malta.

I returned to the island in 2015 and for our day on Gozo we had booked one of those open topped tourist buses.  I don’t usually like these because they seem to spend a lot of wasted time going to places that you don’t want to go but the man at the hotel reception had persuaded me that this was a good option because we could be sure of seeing all of the places of interest in one day which could not be guaranteed if relying on the privatised bus service.  We found the bus, made our way to the top deck and waited for it to fill up with passengers and leave for the first stop Victoria.

Victoria is the capital of Gozo.  It used to be called Rabat but in 1887 the British renamed it to commemorate the Golden Jubilee of Queen Victoria.  I can’t help thinking that it is rather arrogant to go around changing place names in such a superior way.  A lot of people on Gozo still call the place Rabat – Good For Them!

The bus dropped us off and we made our way to the centre of the city, to St George’s Square and the Basilica of the same Saint.  As it was 23rd April there was a lot of bell ringing and celebration but the disappointment was that the square resembled a construction site as it was in the process of restoration and improvement.

We moved on from St George’s building site and made our way to the Citadel at the very top of the city which as the name suggests is a medieval fortress city in the most defensible position on the island.  This also turned out to be rather a disappointment because this was another construction site.

The Citadella is on the UNESCO World Heritage tentative list and it looked as though the Gozians are putting in a bit of extra effort (courtesy of EU heritage funding) to give the application a boost.

This is the Cathedral, no cannon anymore, replaced now by statues and the decoration on the facade of the building is gone which personally I thought was rather a shame.

In 2017 we took the ferry to Gozo again but when we got there we did nothing more than wander around the port town of Mgarr which is most likely something that not many people do as they clamber aboard buses and taxis and leave the place as soon as they can.  It was rather nice, we strolled around the port, explored some dusty back streets, found a friendly bar and then after only an hour or so made our way back to the ferry terminal and returned to Malta.

Enjoying an exclusive location close to Malta’s largest sandy beach and graced with acres of beautifully landscaped gardens. The Resort is a regular meeting place for repeat guests from all over the world who have come to refer to the Resort as their ‘home away from home’. Mellieha Bay Hotel Website

Once a year I go on holiday with my daughter and grandchildren.  Twice sometimes like last year for example.  In 2016 we went to Malta and they enjoyed it.  Early in 2017 I began a debate about where we should go later in the year.  This didn’t take too long and the vote was unanimous – MALTA!

I am never really certain that it is a good idea to keep going back to the same place but Malta is one for which I will gladly make a regular exception.

I have been to Malta several times before.  I first went there in 1996 and liked it so much that I returned the following two years.  Each time I stayed at the Mellieha Bay hotel in the north of the island.  These were family holidays with two teenage children, beaches, swimming pools, banana boat death rides and Popeye Village.

I liked it so much that I had always wanted to go back.  I had repeatedly told Kim that Malta is special and that I was certain she would like it as much as I did.  In 2015 the opportunity arose and I was able to find a combination of cheap flights and a hotel deal at Mellieha Bay Hotel for just £200 for four nights and five full days.  A bargain absolutely not to be missed!

I have heard it said that you either love Malta or you hate it, there are no half measures, there is no sitting on the fence.  I love it but upon arrival I could tell almost at once that Kim wasn’t overly impressed.  The hotel was opened in 1969 and at nearly fifty years old and almost twenty since my last stay the place was showing its age and to be honest you would probably have to say a little beyond its best and in need of some attention.

But what the place lacked in style was more than compensated for by the welcome that we received at check in and then a wonderful five days by the end of which Kim was fully paid up member of the  “I Love Malta” club, so much so that two years later she would have been bitterly disappointed if the children had chosen anywhere else.

The Mellieha Bay hotel is now the Mellieha Bay Resort and although it now has foyer shops and a fitness centre it has still retained the essential characteristics that made me fall in love with it twenty years ago.  The restaurant is no longer waiter service, it is a buffet but it still has the Limelight Lounge, which has hardly changed a bit.  This is where I used to play bingo, this was where there was children’s entertainment and this was the place where they played groovy disco music – and they are still doing it!

Maybe I will get to break the ‘don’t go back’ rule again next year – who knows?

How do I get there? – scheduled plane service and then taxi or bus ride (taxi recommended)

Malta, The Boats Have Eyes 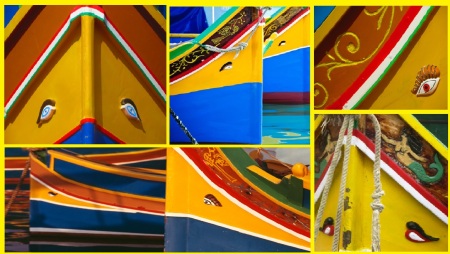 Maltese fishing boats are called Luzzus and are are brightly painted in shades of yellow, red, green and blue and the bow is normally pointed with a pair of eyes.

The most popularly accepted legend is that the eyes date back to Phoenician times, from around two thousand two hundred years ago, when those great seafarers and traders from the Eastern Mediterranean established a trading-post on Malta.

The eye is believed to protect the fishermen from any harm when they’re at sea. On either side of the prow will be the carved and painted eye of Osiris, the Phoenician god of protection against evil – an example of ancient myth in modern times.

In his book, ‘Voices of the Old Sea’, Norman Lewis recounts how the Guardia Civil in Spain took a dim view of the eye of Osiris…

“He (the policeman) called over another fisherman. ‘What purpose do you imagine those eyes on the boat serve?’.

‘The evil eye, as you call it, doesn’t exist’ the captain said, ‘Paint them out'”

An alternative version is that the eyes of the boat which generally look down will guide the men to the best fishing waters.

Eyes like this were once common on fishing boats in Greece but the practice has all but died out there.  Eighty years ago fishing boats in Mediterranean Spain and the Algarve in Portugal also used the symbol of the eye but, apart from Malta, the only place to be sure of finding them now are on traditional boats called Jabega in the port of Malaga, which was also once a Phoenician trading city. 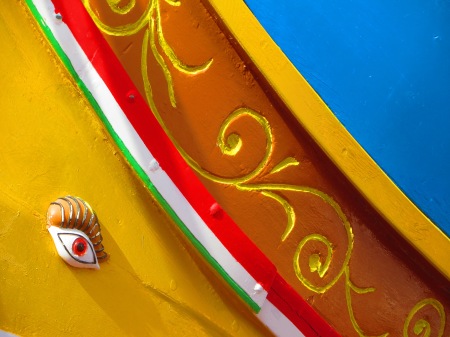