I originally posted this in 2014 when I was in a completely different group of blogging pals, following and followers so I repost it here five years later.  If you have seen it before then I apologise.  Skip it and move on.

This is a fabulous place. From the approach all you can see is the top of a stout tower because the Abbey was built in a deep valley of the River Skell and it is only when the path begins to dramatically drop that it is possible to grasp the immensity and grandeur of the building and to appreciate the serene beauty of this UNESCO World Heritage Site.

Here I am reliving my days as a churchgoing choirboy… 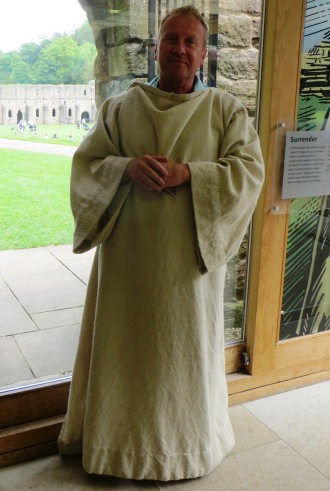 Ripon had been rather quiet for a bank holiday Monday, which I suppose gives away the fact that it wasn’t that interesting – the busiest car park in fact was next to Sainsbury’s Supermarket – but in contrast, and I really wasn’t expecting this, Fountains Abbey was absolutely heaving with bank-holiday visitors.

We had considerable difficulty finding a parking spot and as we drove round and round, further and further away from the visitor centre I began to fear that I had made a mistake in coming here.

Eventually we found a space and beat two or three other people to it and as I eased the car into the tight space another driver waved to me and said well done – well I think that is what he said although he did look rather agitated and on reflection it wasn’t a friendly gesture and a smile it was ‘up yours’ and a scowl.

Now that we were parked any thoughts of by-passing the place and carrying on to an alternative visitor attraction immediately evaporated so we paid the rather expensive entrance fee of £10.50 each and made our way across a field to the ruined Abbey.

This is a fabulous place.  From the approach all you can see is the top of a stout tower because the Abbey was built in a deep valley of the River Skell and it is only when the path begins to dramatically drop that it is possible to appreciate the immensity of the building and to appreciate the serene beauty of this UNESCO  World Heritage Site.

When the original thirteen Benedictine monks discovered this place in 1132 I bet they couldn’t believe their luck!  The sheltered valley had all the natural features needed for the creation of a monastery, providing natural protection and shelter from the weather, stone and timber for building and a supply of fresh running water.  After enduring a harsh winter in 1133, the monks applied to join the Cistercian order and in 1135 became the second house of that order in northern England after Rievaulx a few miles further north.  They began a journey that turned Fountains into one of the richest monasteries in all of Europe.

The Abbey flourished for four hundred years, its immense wealth based on sheep farming and the woollen industry especially after a law passed in 1326 which forbad English people from wearing foreign cloth.  What a stroke of luck that must have been, I can see the monks going around insisting on looking at the little labels sewn into peasant’s cloaks to make sure they weren’t made from something with an overseas origin.

All of this came to an end of course sometime between 1536 and 1541 during the time of the Dissolution of the Monasteries when Henry VIII disbanded religious houses in England, Wales and Ireland, appropriated their income, disposed of their assets, and provided for their former members and functions. He was given the authority to do this in England and Wales by the Act of Supremacy in 1534, which made him Supreme Head of the Church in England.

What surprises me is this.  In 1540 they hadn’t even finished building Ripon Minster,  four miles away, and this place was way bigger and better, so why didn’t they just abandon the Ripon project and just keep this one?  It seems to me that the Dissolution Business Plan was fundamentally flawed!

The land was confiscated, the treasures stolen and the building sold for redevelopment, a sort of medieval brown-field site and the Abbey was systematically dismantled and the stone sold for alternative construction work including nearby Fountains Hall.

Although it was busy it was not uncomfortably crowded and we walked through the ruins and then through a meadow of wild flowers next to the river and to the landscaped water gardens of Studley Royal and then after a couple of hours in the sunshine and without a picnic basket with which to join hundreds of other al- fresco diners on the Abbey front lawn it was time to move on.