Travels in Spain, Plaça d’Espanya and Poble Espanyol in Barcelona

The train from Montserrat arrived back at Plaça d’Espanya in the middle of the afternoon and this was our chance to take a look at another famous district of Barcelona – Montjuïc, a flat top mountain area which overlooks the port and the city.

The Plaça d’Espanya was included in the plans for the expansion of Barcelona in the mid-nineteenth century and was laid out with wide boulevards and six main roads all converging on the centre of the square where there is a monumental statue surrounded by a Baroque colonnade.  It was completed in 1929 on the occasion of the International Exhibition which was held in this area of the City.

The statue at the centre is designed as an allegory representing all of Spain. Three sides with sculptures that symbolize the three principal rivers of the Iberian Peninsula,  Ebro, Guadalquivir, and Tagus, around the central sculpture, three decorated columns which symbolise  a Spanish/Catalan self-assessment of the qualities of themselves as a Nation – Religion, Heroism and Arts.

The Plaça d’Espanya is a busy roundabout, on one side is the old bullring, now a shopping centre (because bull fighting is banned in Catalonia) and on the other are two bell-towers known as the Venetian Towers, on account of the fact that design and construction was heavily influenced by St. Mark’s Campanile in Venice.  From there a walk up a gentle gradient towards the imposing structure of the Renaissance style Palau Nacional, built in 1929 as the main exhibition hall and today The National Art Museum of Catalonia.

This is a lovely part of Barcelona that has a national and international ambiance with architecture borrowed and copied from across Europe and with buildings designed to give a representation of all of Spain.  A shame then that large areas of it were destroyed in the calamitous Spanish Civil war of 1936 to 1939.  Fortunately everything is now rebuilt and restored in the original style.

To illustrate this, at the centre of this Spanish showcase, next to the Palau Nacional, is an attraction called Poble Espanyol, built in 1929 and still there now as a tourist attraction.  I found it to be a rather odd sort of place that aspires to celebrate the various regions of Spain but, for me anyway, failed to effectively capture the spirit of the country and it isn’t really a museum but rather a collection of shops and restaurants claiming to sell and serve regional specialities.  For anyone who has been to Disney World EPCOT World Showcase you will probably know what I mean. 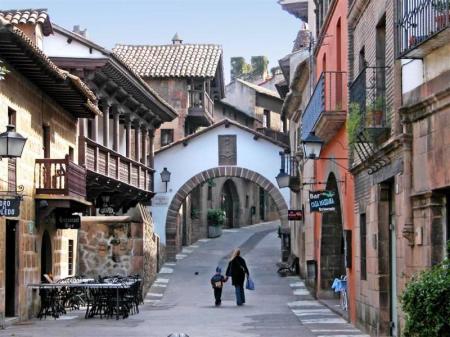 The Disney view of the World doesn’t include Spain in the World Showcase, which is an oversight if you ask me, but if it did then something like Poble Espanyol would be exactly what it would most likely look like.

An interesting thing about the attraction is that it claims to introduce the visitor to the heritage and culture of each of the Autonomous Communities of Spain and yet it only showcases fifteen of the seventeen and as we left I couldn’t help wondering why the Canary Islands and La Rioja didn’t rate a mention or at least a shop? So, I have looked it up; apparently the research designers were unable to organise a visit to the Canary Islands for economic reasons and LaRioja didn’t exist as an Autonomous Community of Spain until 1980.

We stayed around the area for a while but it was too late to visit the museum or the shops of Poble Espanyol so we stopped for a drink in the park and then made our way back to the metro.

The route took us past a cascading waterfall and four ionic columns originally erected in 1919 to be a symbol of the Catalan Nation and its aspiration for self-governance and independence (the columns represent the stripes of the Catalan flag). The originals were demolished in 1928 under the orders of Madrid but were rebuilt in 2010. I understand the symbolism of the columns but to be honest I found them to be a little inconsistent with the area and a bit jarring on the eye.

Not so the adjacent Magic Fountain which was providing a fountain display where the water was dancing and leaping into the air with a cycle of changing routines. The fountain was commissioned to replace the four columns in time for the National Exhibition. It is a great spectacle but the best time to see it is at night time when the fountains are accompanied by a light show and music.

We weren’t staying close enough to return later (mid-June and not getting dark until quite late) so instead we returned to the same restaurant as the previous evening and instead of the fountain took night time pictures of the Sagrada Familia as an alternative. 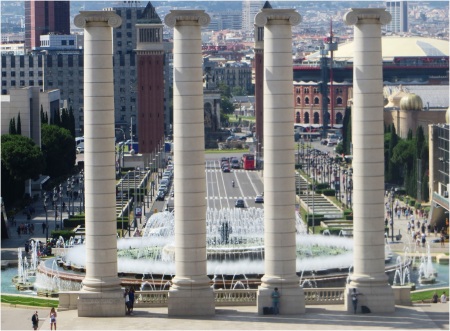 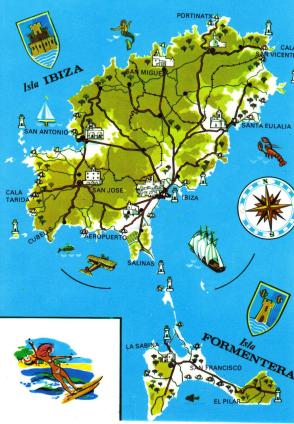 Travels in Spain, Montserrat and the Black Madonna

After a day of modernist architect Antoni Gaudi and another one in the medieval streets of the Gothic Quarter of old Barcelona the plan today was to leave the city and take a train from Barcelona and travel thirty miles west to visit the Monastery of Montserrat.

So, with rigor mortis fingers clutching our wallets and our valuables we descended deep down into the metro tunnels and began our journey.

It took about an hour to arrive at our destination and then another thirty minutes on the funicular railway to reach the top of Catalonia’s Sacred Mountain. This is a place of pilgrimage where apparently every Catalan visits at least once in their life to watch the sunrise over the Serrated Mountain (Montserrat).

I have to start with another rather unlikely religious yarn.

The history of Montserrat began in the year 880 when a small group of shepherd children (these stories generally include young children – Knock in Ireland, Fatima in Portugal and even Joan of Arc) saw a bright light descending from the sky in the mountains and heard angels singing and instead of being shit-scared the music filled their hearts with a radiant joy.

The visions occurred in and around a cave which was explored by the religious elders of the community where miraculously they found an image of the Virgin Mary. This is the Black Madonna, considered to be one of the most celebrated images in Spain, which is believed to perform numerous miracles and attracts millions of visitors every year from all over the world.  People queue a long time to visit the Black Madonna, about three hours on the day that we were there, and when they get to the front of the line they get just about five seconds to make a wish before it is all over.

An interesting issue about the Madonna is that she is black and so is the infant Jesus which is just one of those pieces of evidence that some scholars rely upon to support the theory that Jesus wasn’t a sort of blond Nordic type that we all imagine him to have been in the west but rather more like a dark skinned man from the Middle East. Rather like an Arab.  If Muslims believed in Jesus and were allowed religious portraits then I am certain he would be black.

Seems to work well both ways I think but that surely is the point, Jesus can be whatever you want him (or her) to be…

Another interesting fact is that in 1493 Christopher Columbus named the Caribbean island of Montserrat after the Virgin of Montserrat.

Not content with the dubious story of the Black Madonna, some also claim that somewhere in a cave in these mountains is the Holy Grail, the Cup of Christ and in previous times Monks used to live in the caves whilst they searched for it in-between prayer sessions.

Many places claim to be the likely site for the Grail (it is good for tourism, after all) but my favourite story is that it is currently in Fort Knox in the USA where tourists can’t go.  The legend states that there is a special room somewhere deep inside the vault that stores not just the Holy Grail but also the Ark of the Covenant and the True Cross, complete with the dried blood of Christ.  I expect Indiana Jones found them all and handed them over to the US Government for safe keeping!

Safe because the main vault door is twenty-two tons of steel and can withstand a direct hit from a two kiloton nuclear warhead.  I don’t believe the story of the Holy Grail but for certain the Depository has housed a copy of the Magna Carta, the Hungarian crown jewels including the Crown of St. Stephen, the U.S. Constitution, the Declaration of Independence, and various other historical documents from all over the world. 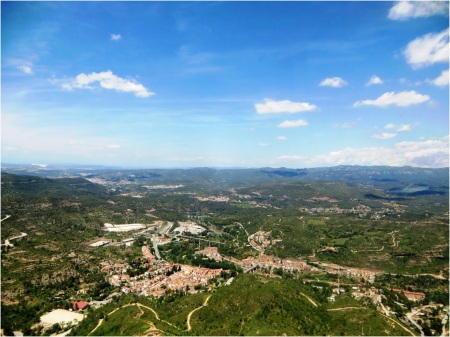 After visiting the church and the Benedictine Abbey and catching a brief glimpse of the Black Madonna from about one hundred yards away we left the monastery complex and took another funicular ride to the top of the mountain.  Well, almost the top because after the train there was a steep climb and we didn’t fancy slogging our way right to the top.  It was too hot!

The Monastery of Montserrat is about 4,000 feet high and isn’t even the highest in Catalonia because this is nearby Vall du Nuria which is about 7,500 feet high.  By comparison the highest Monastery in the World is the Buddhist Rongbuk Monastery near the base of the north side of Mount Everest at 16,350 feet above sea level. 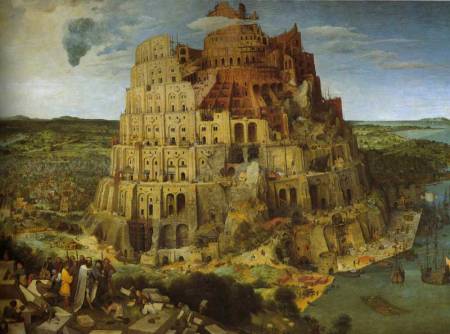 Some people thought it was a good idea to build a tower so high they could get to heaven and prematurely meet God to see what he looked like (was he white, black or woman).  God didn’t like that idea so he invented different languages so that no one could understand one another and they couldn’t complete the construction.  Maybe this is why God allows natural disasters such as earthquakes to destroy Cathedrals like Christchurch in New Zealand, the Great Fire of London to burn down old St Paul’s or terrible wars and people like Bomber Harris whose job it was to destroy German Cathedrals in World war Two.  Just a thought.

I didn’t feel especially close to God I have to say but I did enjoy the views and when we had had quite enough we took the train back down to the Monastery, stopped for a drink and then took the return journey all the way back to Barcelona.  It had been a good excursion and I had enjoyed it.