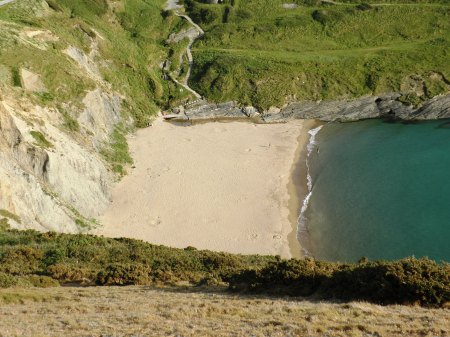 We let Molly sleep on for a couple of hours or so before waking her in time to visit the beach in the late afternoon.  We gave her some time to readjust and when we were sure that she was ready we left the cottage and made for the beach.  It was a difficult little journey down single track roads with only occasional passing places which today wasn’t too hard to negotiate but I guess can be a bit of a challenge in the height of summer!

The Blue Flag Beach awards for 2011 were announced in May and the total number of successful beaches decreased overall by sixty, which means that either the criteria is getting tougher or the coastline is getting dirtier – I hope it is the former.

Each year, national Blue Flag juries assess all Blue Flag candidates to ensure they meet all of the criteria for beaches and marinas at the national and international level. In England this preliminary assessment is carried out by ‘Keep Britain Tidy’ and in the other UK countries by ‘Keep Wales Tidy, ‘Keep Scotland Beautiful’ and ‘Tidy Northern Ireland‘. Those that do are then forwarded to the International Jury, who focus on set criteria that varies from year to year, before giving a final verdict.

Some might legitimately complain that it is an unfair competition because forty-five countries in the World are excluded from the awards simply because they have no coastline.  The largest country in the World without a coastline is Afghanistan but I don’t suppose they concern themselves greatly with the Blue Flag awards because no one would go on holiday there anyway!

In the United Kingdom the total reduced by six, which is 5% of the total following a 10% reduction in 2010, but the biggest losers were Greece, thirty-four, and Spain, eleven.  Because of Greece’s poor performance Spain stretched its lead at the top of the league table to one hundred and twenty-four beaches.  To compensate for the reductions Portugal increased by a whopping thirty beaches and France by fifteen.

In the United Kingdom it is nice to see my new local beach at Cleethorpes in North East Lincolnshire has retained its Blue Flag Status and although I don’t generally go on holiday to the coast in the United Kingdom, this year I went to Mwnt Beach in Ceredigion which I have to say was a delightful place with a thoroughly deserved blue flag.

These slight movements have not however affected the top of the European leader board in any way and the top ten Blue Flag beaches in 2011 are:

Spain, Greece and France deserve to be proud of their achievement but if we look at the results in a different way then there are some dramatic changes in the top ten.  If we divide the number of blue flag beaches by the length of coastline then Portugal are rewarded for their special effort this year because they are way out in front with a Blue Flag beach every six and a half kilometres, pushing their Iberian neighbours into only third place.  Turkey, Italy and Denmark all drop down the list but stay in the top ten but Greece, Croatia and the United Kingdom (where there is only one blue flag for every one-hundred kilometres) drop out altogether to be replaced by the Netherlands who jump to second, Cyprus and Montenegro, which must be a bit of a kick in the teeth for Greece and Croatia.

My favourite beach remains Cofete Beach in Fuerteventura which isn’t Blue Flag but take it from me is quite magnificent and to compensate for no award it’s a place where pretty ladies get their kit off!

Portugal, Beaches and a Sunset