We had not visited the Cyclades Islands in Greece since 2011 and so we were interested to see what changes there might be in five years.

We no longer choose to fly to Athens because there is always the risk of industrial action on the buses or the metro or the ferries, or getting caught up in a demonstration in the city centre as we did in 2011, so this year we flew instead to Mykonos, a popular tourist destination in the centre of the island group.

I last visited Mykonos in 2005, eleven years before, I booked the same apartments so I was curious to see how things might have changed.

It is strange how we get drawn back to places that we are familiar with and have enjoyed and we would be doing this several times again this holiday.  Kim had never been toMykonos so at least it was a new experience for her.

It was an early morning flight, we arrived around lunch time and Poppy from the Anemos  Apartments met us exactly as agreed and drove us the ten minute transfer to the rooms.  She seemed familiar with wild hair and a face like a Rubens cherub – forty years after he had painted it.  It was good to be back and nothing much had changed at the hotel. 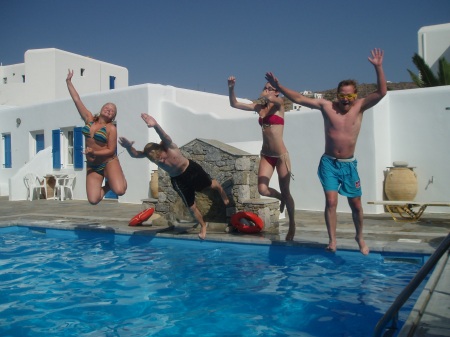 After settling in we walked the short distance to the beach where things had changed a great deal.

Eleven years ago I remember a sandy expanse where we played frisbee and beach tennis but now there was no room for any of that sort of thing because the entire beach was covered by beautiful suntanned, tattooed people lying on luxury sun-beds complete with canvas awnings which made the sea front look like a regatta of sailing boats, flapping away rather like a flotilla of yachts.  People had been here for several days and judging by the bronzed bodies had done nothing else but hire a flotation bed for a day at an inflated sum and sleep for eight hours or so wallowing in the sun waking every now and again to apply more sun cream.

Eleven years ago it was possible to pitch up with a towel and a can of Mythos from the mini-market and just go for a swim.  Not now.  There is a real pressure to select a sun-bed, all of which belong to a restaurant with an extortionate daily rental charge and an expectation to spend money in the bar. €30 a day for two sun-beds!  I would rather lay on a bed of nails!  I calculate that a fortnight holiday spent on the beach would cost €420 just to lay on the beach!  I wondered just how much money people have to waste!

How wonderful it must have been to wander down a beach from a taverna to the sea as Lawrence Durrell or Norman Lewis might have done without all of the obstacles of sun-loungers, running the gauntlet of the looky-looky men or dodging the pedaloes.

Another noticeable change was the cost of living.  Our benchmark is always the price of a Greek salad, which we expect to be about €6 and a 500ml bottle of Mythos at around  €2.50.  In Mykonos this time they could be as much as three times that much! Three times!

Maybe the increase in prices was a consequence of all the beautiful tattooed people with more money than brains lying on the sun-beds and ordering their cocktails by smart phone, maybe it was because of the financial crisis that had raised VAT by 200% since last we came or maybe it was because of all the cruise ships who daily spew thousands of peoples ashore who have even more money to burn!

To be honest I felt out of place, rather like someone who has ordered a slimline tonic when Richard Burton was at the bar buying a round of drinks.  Like a Yankees supporter who finds himself at tbe Red Sox end of the stadium!

I have to say that I prefer the sound of the sea rearranging the pebbles on the beach to the boom-boom of the beach disco music, the hum of insects to the buzz of motor cycles and the scent of sweet jasmine to Hawaiian Tropic sun tan butter.

I was making comparisons with my previous visit but of course if this was my first time I would have nothing to compare it with.  Kim couldn’t join me in this distraction but if she returned in ten years then she would probably do the same.  Nostalgia I find is cyclical and not just a thing of the past.

Later in the day as afternoon tipped over into evening the place became less crowded, the beach people packed up and left to go and admire themselves in the mirrors and the sparkling lights of the tavernas began to twinkle into life.  We naturally avoided the expensive ones on the seafront and found somewhere we liked a couple of blocks behind.

Here we selected a simple table with a check tablecloth and ordered reasonably priced rustic food and wine and listened to the conversations around us.  There was a constant chatter of people who, just as throughout the day children gather shells in a bucket, had collected random thoughts in their heads and then, just as children return their shells to the sea at the end of the day the adults sat and gave up their recollections to each other over evening meal.

It was wonderful, even though Mykonos is never going to be my favourite it was so good to be back in the Greek Islands. 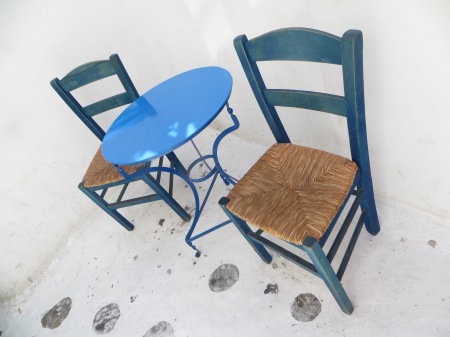