“…anyone that knows Spain will be aware of the frequency of the marriage in which the wife is deeply pious and the husband is irreligious.  This is indeed a fairly normal situation.  The man’s sense of self-esteem conflicts sharply with the teachings of the Church, while he is irritated by its many small, fussy rules and regulations, which treat him, he feels, as though he were a child.”  –  Gerald Brennan – ‘South From Granada‘

Once again it rained heavily in the night but by morning it had cleared when I went out into the street to check the weather.  There were blue skies and as this was Sunday there was a church bell ringing with frosty clarity and calling people to service as I wandered aimlessly about checking the breakfast options in the little bars around the square.

The only place open was the Bar Plaza so we returned there for the fourth time and had the same breakfast as the previous day except that due to a misunderstanding we ordered way too much Serrano Ham and ended up with far more than we really needed and a much bigger bill than we anticipated.

The bad news this morning was that Micky had gone down with a nasty little case of man flu and he wasn’t feeling very good at all.  This was the strain that affects the sense of humour and social skills and after breakfast Mick invited us to go out without him.  Naturally we said we would do no such thing and then as we watched his normally stoic temperament evaporating in front of us he demanded firmly that we should go out without him and we took the hint.

We were planning to go for another drive out, possibly to the town of Ronda but this didn’t seem fair so the rest of us decided instead to stay and explore Carmona instead.  We weren’t sure that there would be enough to do to keep us amused all day so we walked very slowly from the hotel towards the eastern gate of the old town, the Puerto de Córdoba which is of part Roman construction.

Because Carmona is built on an elevated ridge overlooking the central plain of Andalusia the view beyond the gate opens to a glorious vista of the surrounding countryside which today entertained us with the drama of magnificent skies. 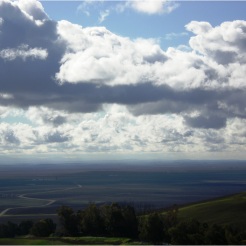 The welcome warmth of the sun was in contrast to the chilly shade of the street and we stayed a while and admired the view and warmed ourselves up before going back through the gate and climbing steadily towards the Alcázar Del Rey Don Pedro, which is an old castle at the top of the town that has been converted to a luxury Parador hotel.  We went inside and admired the lounges and the restaurant and the stunning view from the balcony but it didn’t seem that they particularly welcomed non-paying guests so we quickly left and carried on.

Next around the southern rim of the town and there were more good views over the plain and we sat for a while and soaked up more weak sunshine that was struggling to get up to full late morning temperature.  Our route took us now to the Alcázar de la Puerto de Sevilla, which was the western gate protecting the entrance to the old town and then we walked for a little way into the new town because I wanted to take the girls shopping but sadly on account of this being Sunday they were mostly closed.  I was desperately disappointed about that as you can probably imagine.

There seemed to be strange goings on in the main town square because it was full of men just standing around and chatting in groups and making an enormous din as they competed with each other to be heard about the great political  issues of the day or the previous day’s football results perhaps.

Mostly elderly men because  as Gerald Brennan explained in ‘South from Granada’ “…almost every Spanish peasant becomes wise when he passes fifty.”  This was obviously a Sunday morning ritual while wives attended Church and the street corners and the public squares were overflowing with men all in animated conversation waiting for the service to end.

Brennan also explains that – “At bottom the husband almost always approves of his wife’s devoutness, is aware that he is only playing truant and that, after a lifetime shrugging his shoulders at the Church, he will return to it in time to receive its last sacraments.”

Back at the Puerto de Sevilla there was a sunny pavement with café tables so we stopped for a drink before going back to the hotel to see if there was any sign of Micky.  There was none so we continued our walk around the town without him, this time back to the Roman ruins about a half a mile away back in the same direction that we had just returned from.

Travels in Spain – Córdoba and the Mezquita

“The Supreme Caliphate of Cordoba was set up in rivalry to the Abbasside dynasty of Baghdad and was so cultured, sophisticated broad-minded and fastidious a state that for a century southern Spain was the lodestar of Europe”  Jan Morris – ‘Spain’

Although the road was swinging encouragingly to the south it couldn’t keep us ahead of the cloud and by the time we reached the city of Córdoba it was beginning to overtake us.  It was still patchy as we parked the car but by the time we had set off for the centro historico its advance was relentless and it became quite gloomy, overcast and cold and we were beginning to regret the lightweight clothing option that we had selected earlier.

Córdoba is a moderately sized place today but once it was the largest Roman city in Spain and later became the thriving capital of the Caliphate of Córdoba that once governed almost all of the Iberian Peninsula.  It has been estimated that in the tenth century it was the largest city in Western Europe and, perhaps, in the whole world with up to half a million inhabitants.  If this is true then only Constantinople and Rome would have previously been bigger and even today a population that size would be in the top three in Spain.

As always of course, be wary of biggest, highest, widest claims! 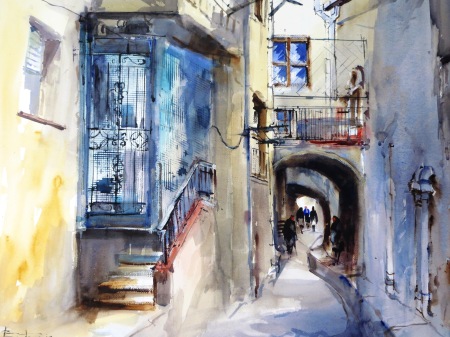 Walking to the city centre we were disappointed to find that one of the two principal attractions the Alcázar de los Reyes Cristianos was closed for the afternoon so we had to make do with the external views and move on to Córdoba’s Great Mosque, the Mezquita.

As well as being the second largest mosque in the world at the time of its construction this was the grandest and most beautiful mosque of all constructed by the Moors in Spain and it is situated amongst a picturesque lattice work of narrow streets, patios and plazas in the city’s old Jewish quarter.  After the Spanish Reconquest, it was transformed into a church, and some of the Islamic columns and arches were replaced by a basilica and today it is a Roman Catholic Cathedral and the main church of the diocese of Córdoba.

Inside it was really spectacular with nearly a thousand columns of granite, jasper and marble stripped buff-white and rose-pink supporting the roof and creating a dazzling visual effect.  When the Cathedral was constructed in the sixteenth century some of these pillars were removed which I suppose might be described as an act of cultural vandalism, the Reconquista, Christianity over Islam, but in actual fact, despite being a sort of cuckoo in the nest, the Baroque structure didn’t seem to be entirely out of place.

That is the good things about buildings, when they are no longer required for their original purpose they can always be converted to some other use.  All over Spain Mosques were converted to Christian Churches, Arab Alcazabas to medieval fortresses and more recently stately homes, haciendas and castles to modern Parador hotels.

“To Cordoba belong all the beauty and ornaments that delight the eye or dazzle the sight.”  –  Stanley Lane-Poole – The Moors in Spain

The mosque of Córdoba is without doubt one of the finest buildings in Spain – the most original and the most beautiful. From the moment of entering the great court planted with orange trees it is possible to experience  a feeling of peace and harmony which is quite different from the mood of religious holiness and austerity imparted by Christian cloisters. The small reddish oranges cluster among the dark green leaves, butterflies chase one another, birds compete and squabble and the thrusting columns make a statement that they have been willed by God.

It took some time to walk through the Mezquita and see all of the highlights and when we left and returned to the courtyard it had thankfully stopped raining and although it was still quite cold the temperature had thankfully risen a degree or two above zero.  We walked for a while down by the river and crossed half way on the Puente Romano, which is an elaborate bridge that still sits on original Roman foundations.

Because of the weather we didn’t really see Córdoba at its best and the grey skies took the edge of the visit and because of that we walked back to the car stopping briefly for a drink and a warm in a café and then  drove away in the direction of Granada.

we weren’t staying in the city but in a small village called Romilla just about ten miles west and we drove in in the late afternoon and we knew immediately that this wasn’t going to be very thrilling.  This place was like a cemetery for the living and apart from the excitement of the visit of mobile vegetable shop our arrival was most likely the only thing that had happened in Romilla all day and possibly all week!