A to Z of Statues – Doña Ximena Díaz

El Cid is the national hero Spain, the knight who reclaimed Iberia from the Moors of North Africa.  He was born (nearby) and buried in Burgos and the modern city doesn’t let you forget it.

The Puente de San Pablo (San Pablo Bridge) is the most famous in Burgos, crossing the Arlanzón River in the spot where the San Pablo gate to the city used to stand.

The bridge is decorated with statues of nobleman and famous sons from Castille, including El Cid and his warrior allies and also his wife,  Doña Ximena Díaz. 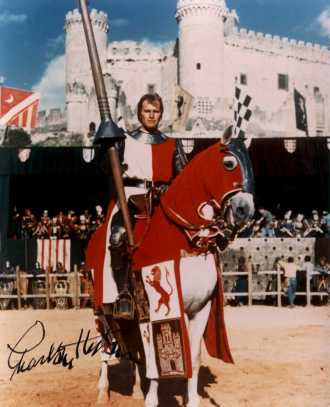 In March 2009 I visited the town of Belmonte in Castilla-la Mancha and visited the castle were some of the scenes for the film El Cid were shot.  On the way back down after visiting the castle I crossed the exact spot where Charlton Heston and Sophia Loren filmed the closing scenes of El Cid.

El Cid is the national hero of Spain, a bit like our Queen Elizabeth I or Winston Churchill.  He was a warrior, a nobleman, a knight, and a champion.  He became a legend within only a few years of his death and most Spaniards know about him because at school they read an epic poem called El Cantar de Mío Cid.  It is the first great poem in the Spanish language and was written about 1140, only fifty years or so after he died.

A hero needed a wife and El Cid was married in either in1074 or 1075 to Doña Ximena of Oviedo, a city in the modern day Principality of Asturias in the north of Spain but in the eleventh century part of Alfonso VI’s Kingdom of Leon and Castile.