Another picture from Porto.  When it comes to washing lines, if I was a gold miner in Ballarat, Porto is the equivalent of hitting the mother load.

This woman is lost deep in thought, I wonder what she is thinking about?

It is a Challenge, feel free to join in…

The clothes now wave that hang upon

the tired old line that stretches from

a leaning pole to a rusted hook

Every garment pegged and spaced

each shirt and sheet carefully placed

along the line the socks will run

until they dry in the scorching sun. 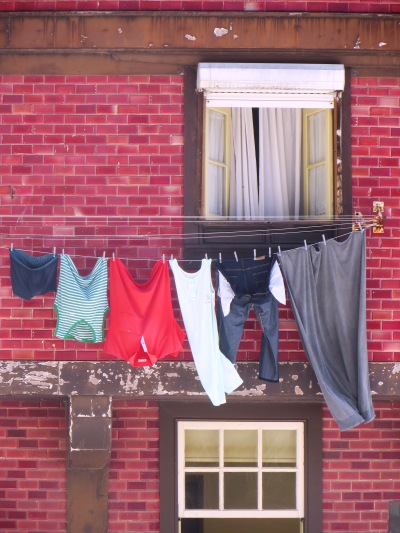 Portugal, Ovar to Porto and the Francesinha

Like all public buildings in Ovar the train station is decorated completely in blue and white tiles with scenes depicting the railway and regional life from a hundred years or so ago.  This is quite a regular thing to do in Portugal.

In our haste to get to the hotel at Furadouro we had missed them when we arrived three days earlier  but we had a fifteen minute wait now for our train to Porto so we had the opportunity now to take a proper look.  They are a bit damaged, chipped and cracked and faded and in urgent need of repair in some places but they created a nice little diversion while we waited which was a lot more interesting than standing around reading the train timetable.

It took no more than forty minutes to reach the city of Porto and on our final approach to the rail terminus at São Bento the train crossed the River Douro close to the Ponte Do Maria Pia a railway bridge (no longer used by trains) built in 1877 and with a design attributed to Gustave Eiffel.  If we thought the Azulejos at Ovar station were impressive then we were simply in awe of the tiled main entrance hall of São Bento where there are approximately twenty thousand azulejo tiles depicting various historical scenes from Portuguese history.

Late morning in Porto it was hot and busy and I now faced the moment that I had been dreading for the last hour or so when I would have to break the news that the Alvares Cabral Guest House was about a mile away from the railway station.  Kim was not impressed and her mood didn’t improve any when we started to climb a steep hill away from city centre.  There was a lot of complaining and  I confess that I had forgotten that Porto can rival Lisbon for being rather hilly.

The situation improved no end when we found and approved the accommodation and with long walks,  heavy baggage and endless hills forgotten we stepped outside and made our way to the city after taking a detour to find a recommended restaurant for later and a stop for a drink in a busy little market square still some way from the city centre.

Our plan was not to try to do too much today, after all we had been to Porto before, twice, so we didn’t feel that we needed to rush our return visit.  Despite this we found ourselves being drawn ever further down towards the River Douro and before we knew it we were at the main tourist area – the Ribiera, once a working class area of Porto but now a thriving tourist honey-pot!

Here there are small shops and traditional bars and cafés side by side with derelict and decrepit buildings with rotting timbers, peeling paint, rusting balconies and tired facades trying in vain to disguise years of neglect and so many washing lines that laundry could almost be a national pastime.  The road channels were grubby and the buildings were grimy but it wasn’t without a certain charm and the defiant message from the residents seemed to be “Come and visit us if you like, we know it’s untidy but this is the way we like it!” 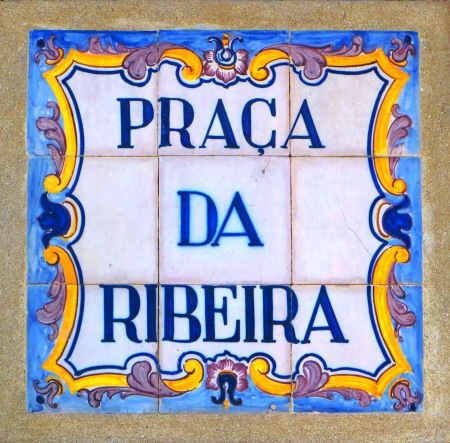 Having almost by accident found ourselves by the river we now faced a long climb back to the hotel.  Next to the most famous bridge of all in Porto, the Ponte Dom Luis I, designed this time by a student of Gustave Eiffel we chanced upon a set of steps which took us back to the top, near the Cathedral and very close to São Bento station from where we would now need to reprise our trek back to the hotel.

Later that day, after we had sat for a while in the garden and rested we made our way to our chosen restaurant. It was an out of the way sort of place but busy with local people so we were encouraged by that and although it seemed quite full the staff hastily rearranged the furniture and found us a table in a cramped but private corner that we shared with some Italian visitors.

The menu was difficult to interpret and the staff struggled to explain it so I resorted to annoying fellow diners and enquiring of them what they had chosen and what they were eating. I forget what we selected but I do know that we enjoyed it.

Unlike the Italians that is because what we didn’t select was the local speciality of Porto, the Francesinha, which is a massive sandwich made with toasted bread, wet-cured ham, smoked sausage and steak and then, if all of that isn’t enough, covered with molten cheese and a hot thick tomato and beer sauce all of which contains an average persons calorie allowance for an entire month – and then some.  I think they had chips with it as well!

Francesinha means Little French Girl in Portuguese and it is said to be an invention in the 1960s of a man called Daniel da Silva, a returned emigrant from France and Belgium who tried to adapt the croque-monsieur to Portuguese taste.  It doesn’t look very much like a croque-monsieur to me, I can tell you! 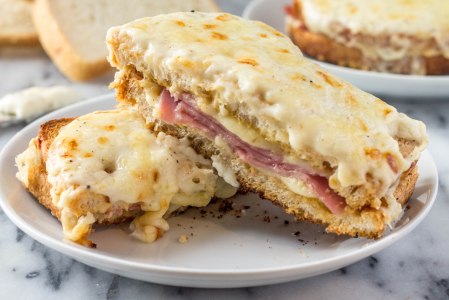 I tried a Francesinha once on a previous visit to Porto and I vowed then that I would never ever do it again! Quite frankly the only time that I would be forced to consider it is in preference to being tortured by the Russian Secret Service or if I had to make a choice between Francesinha from Portugal or Poutine from Canada.

Which would you choose…?

Other than Francesinha or Poutine which food dish would you nominate to avoid?

Here are some prompts…