Travels in Portugal, A Wild River and A Cliff Top Walk in Odeceixa

The soft sound of the rolling sea, no longer a lullaby but now an alarm call, woke me early so once awake I dressed and quietly left the room for an early morning stroll.  I left Kim to sleep on.  The beach that was busy yesterday was deserted now and I felt like Robinson Crusoe as I walked across the pristine sand.  The tide had washed away all of the footprints.  No Man Friday.

To the north of the beach and across the Ribeira de Seixe there is a cliff top with views both north and south and it was our plan today to take the path to the top.  At breakfast the owner of the accommodation told us that we would have to wait until the afternoon for the tide to go out so that we would be able to cross the river.

I may have mentioned before that Kim can be rather impatient at times and she was not in the mood right now to accept the guidance and she didn’t want to wait for the water level go all the way down to paddling depth so ignoring the local advice from someone who had lived here all of his life and knew well the tides and the flow of the river and  at mid morning marched us off to the beach to find a suitable crossing place.  I thought that she was being rather optimistic but I said nothing, I find this is best, and she pointed out that there were people on the other side and they must surely have crossed the river somehow.  She chose to ignore the obvious fact that these people had either swum across or were already parked on the opposite side. 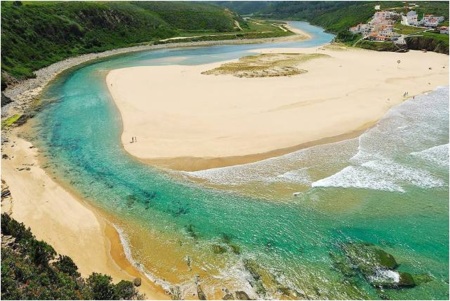 So we walked the length of the arc of the mouth of the river until Kim was finally satisfied that she had found a suitable crossing place.  In a previous life I am convinced that she would have been a jungle explorer or the leader of a wagon train going west in America.  I wasn’t nearly so confident but she sent me across first to test the depth and the current and after I had made a successful crossing she followed me over.

Once safely across and not having been swept out into the Atlantic Ocean we were no longer in the Algarve region because the Ribeira de Seixe marks the boundary with Alentejo, the largest region in all of Portugal.

We followed the path through a car park full of camper vans where people were sitting and enjoying the simple life and then continued to a steep path with shrubs and bushes on either side without flowers but with large deposits of tissue paper.  We wondered why this might be and came to the disagreeable conclusion that the bushes were the bathroom facilities for the camper-vanners simple life style.  We continued to climb but stuck to the middle of the path and watched carefully where we were treading.

A surprisingly short and easy stroll now took us to headland with magnificent views extending north and south and west over the sea as far as the horizon.  It had certainly been worth the effort.  We walked back the way that we had come across the cliff tops, through a pine forest, along the tissue trail and then once more across the river. 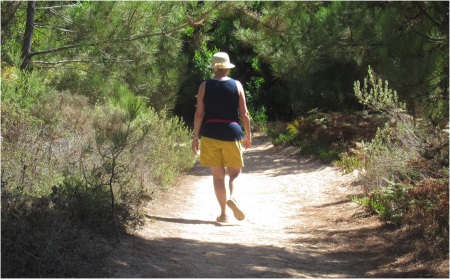 Having safely negotiated the river crossing for the second time we stopped now for refreshment at a busy bar near the beach and then continued our walking by turning in the opposite direction and headed south where thankfully there was no water to cross.

We walked for a mile or so but it soon became clear that there was little to see, the path stayed stubbornly away from the cliff tops and the views and the sand was soft and difficult to walk across in beach sandals so after a while we turned back and returned to the accommodation where after a swim in the sea we spent the rest of the day on the balcony enjoying the view over the Atlantic Ocean.

In the evening we dined again at the sea food restaurant.  Kim had Padron peppers and I had a simple tomato salad and then we shared a lobster, crab and prawn rice and I received instruction on how to crack a lobster claw from a helpful waiter.  It seems that you don’t just smash away at it because bits of flying shell can be a hazard to other diners and it has to be covered with a cloth before applying the hammer.  How was I to know, lobster is not a main ingredient of my regular diet.

We had walked seven and a half miles today.