The euro is useful because it has simplified travel to Europe but I miss the old pre-euro currencies. To have a wallet full of romantic and exciting sounding notes made you feel like a true international traveller. I liked the French franc and the Spanish peseta and the Greek drachma of course but my absolute favourite was the Italian lira simply because you just got so many. 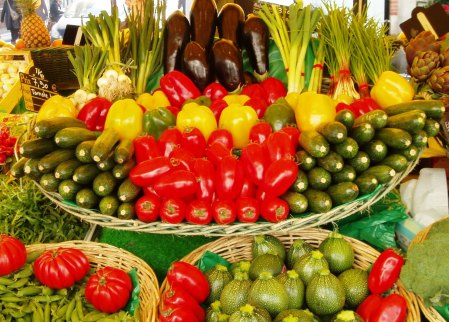 Outside the vegetable stalls offered appetizing produce that was so fresh it still had one foot in the countryside and was all arranged in spectacular displays with an elaborate attention to detail.

Blue is used everywhere in the Cyclades, church cupolas, windows, doors, walls, staircases and fences which provide blue ‘belts’ around buildings, which supposedly provide protection against evil. Turquoise stones on jewellery, belts and weapons are put there to safeguard people, animals and even plants.  Blue ‘eyes’ and blue stones mounted on gold and silver are presented to babies and small children as a talisman for protection and in the Greek Boy Scouts all the boys where a sky-blue scarf around their necks for this very same reason. 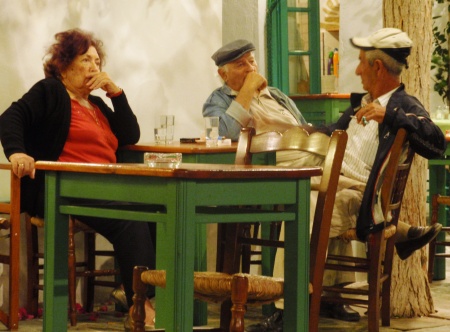 Life in the Slow Lane…

There was a welcoming bar in a little square with rattan cane tables and chairs under leafy trees with books and backgammon available for customers to sit and enjoy and idle some of the day away.  As we were getting accustomed to this pace of life we drank coffee and ordered baklava and stayed a while until it was time to go back.

Folegandros is a dreamy timeless sort of place in a sort of 1960s time warp and all around there were were lots of ageing beardy hippies with ponytails, wearing white linen and flip-flops and carrying sketch pads.  All that was missing was the joss sticks and the candles, the flowers and the guitars. 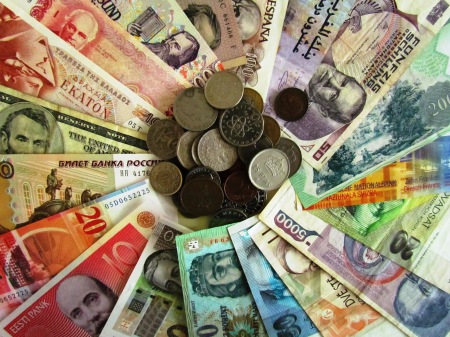 The euro is useful because it has simplified travel to Europe but I miss the old pre-euro currencies. To have a wallet full of romantic and exciting sounding notes made you feel like a true international traveller. I liked the French franc and the Spanish peseta and the Greek drachma of course but my absolute favourite was the Italian lira simply because you just got so many.

The windmills are tall cylindrical towers capped with dark cones and four big “sails” that move with the wind.  In days gone by, farmers would haul their grain to these windmills where the structures harnessed the power of the wind to grind grain.

The windmills and the skill to operate them were passed down from fathers to sons. Windows placed around the tower of the windmill provide great views today. But that was not their original use. From these windows, the miller could keep watch on the shifting winds. When the winds changed, the miller would have to move the tiller beam to turn the mill. If he didn’t a sudden strong wind could strip the sails, rip off the top and the whole building could be destroyed by a gusty wind.

Like all island towns Plaka on Milos was predominantly white with blue doors, external staircases, playful kittens and discreet little shops, most of which were closed on account of this being siesta time.  There must have been some sort of priest’s convention in town today because there were dozens of black robed ministers everywhere, in the bakery having morning coffee and later in the taverna having lunch and what we thought was really strange was that they were almost constantly on their mobile phones.

Weekly Photo Challenge: Beneath Your Feet

Outside the museum and also in the cavernous entrance hall there are glass floors with sub-level views of the excavations that were discovered during the construction of the building and contributed to the delays and then there is a steady incline through a timeline of seven centuries of history and impressive well set out displays along a generously wide gallery that provides sufficient space for everyone to stop and enjoy the exhibits without feeling hurried or under pressure to rush.

Weekly Photo Challenge: Beneath Your Feet

… I say terrified because to cross this swaying, rotting foot bridge required Indiana Jones type nerves of steel.  Some of the planks of wood were missing and the steel rope that held it all together was rusty and corroded.  With two or three people on it at the same time it rocked and lurched precariously from side to side and below us was a drop of about twenty metres to the fast flowing river strewn with sharp rocks and jagged boulders which, if it didn’t kill you outright, would have guaranteed an unpleasant landing and maybe a night or two in a hospital bed if the whole thing had come crashing down.