Some World changing developments were happening around about the time of my first year, most of them in the America where the USA was emerging as the wealthiest and most progressive country in the World.

Apart from the Atomic Bomb no development was more dramatic than the hamburger.

The McDonald brothers were interesting, some would say rather eccentric characters who were inspired by the assembly line manufacturing method of Henry Ford in his car factories and in 1948 without warning they suddenly closed their traditional and popular establishment for several months and set about applying the principles of mass production to the restaurant industry. 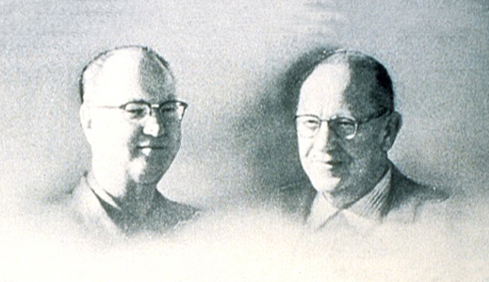 They pared the service back to only the essentials, offering a simple menu of hamburgers, french fries and milkshakes, which were produced on a continuous basis rather than made to order and with no alternatives on offer.  Basically just ‘take it or leave it’.  This was whole new idea that they called ‘fast food’ that went against all service conventions which could be served to a formula, almost instantaneously and always with absolute consistency.

They also removed any distractions like jukeboxes and payphones so it wouldn’t become a hangout spot for young people and that there would be a continuous turnover of customers. 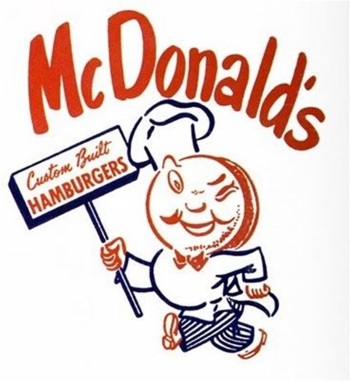 The brothers reduced labour costs because there were no waiting staff and customers presented themselves at a single window to place and receive their orders.  They made the food preparation area visible to the customers to demonstrate its high standards of cleanliness and they eliminated all plates and cutlery serving only in paper bags with plastic knives and forks.

Their introduction of the ‘Speedee Service System’ established the principles of the modern fast-food restaurant. The original mascot of McDonald’s was a man with a chef’s hat on top of a hamburger shaped head whose name was ‘Speedee.’  Speedee was retired in 1962 and replaced by Ronald McDonald which I always thought was the weirdest possible merchandising mascot.  He was just plain scary!

Ray Kroc was a multi-mixer milkshake machine salesman and he was intrigued by an order from the McDonald brothers who had purchased eight of his Multi-Mixers, which to him seemed rather a lot for a small restaurant.  Immediately after visiting the San Bernandino restaurant he became convinced that he could sell exceptional numbers of mixers to every new restaurant that they opened and so he offered the McDonald brothers a deal.

Although they were truly innovative the it turns out that the two brothers were not especially ambitious and were they were satisfied with their one restaurant that provided them with a comfortable lifestyle and regular income.  Their only indulgence was to treat themselves to a new car every year.  But Ray Kroc realised the potential of their idea and with much bigger plans proposed a chain of new McDonald’s restaurants and he tried to convince them to expand the operation.  They refused.  He eventually became frustrated with their lack of vision and forced them into an agreement.

Kroc prepared a business proposal but insisted that he could not show all of the details to the potential investors so the agreement was made with a handshake (as opposed to a milkshake). The brothers dithered and Kroc became impatient and annoyed that they would not transfer to him the real estate and rights to the original unit.  Kroc walked away from the transaction and then refused to acknowledge the royalty portion of the agreement because it wasn’t in writing.

The McDonald brothers were clearly poor businessmen and no match for the ruthless Kroc, they even neglected to register the name McDonalds so to force the issue Kroc opened his new McDonald’s restaurant near the brothers diner which they were forced to change to “The Big M”. 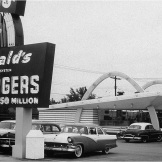 In 1961, he finally purchased the company from the brothers. The agreement was for the McDonalds to receive $2.7 million for the chain and to continue to receive an overriding royalty of 1.9% on future gross sales and very specifically 1.9% because when negotiating the contract the McDonald brothers said that 2% sounded greedy.

McDonalds didn’t reach the United Kingdom until 1974 and now there are over a thousand of them and the Company business plan is to open thirty new restaurants every year.  I don’t remember when I first started using McDonald’s, probably at about the time my children started to request it as a dining option, and now, apart from the occasional breakfast bun, I would only use it if I am absolutely desperate!

One place where Kroc failed to make an impression was at Disneyland.  In 1955 he wrote to Walt Disney offering a deal: “I have very recently taken over the national franchise of the McDonald’s system. I would like to inquire if there may be an opportunity for a McDonald’s in your Disneyland Development.”  The story goes that Walt was too busy to deal with the matter personally so he passed it on to the President in charge of concessions.  Allegedly he agreed but wanted to increase prices by 50% with all the extra profit going to Disney.  Kroc refused and it was to be another thirty years before they worked together.

Age of Innocence – More About McDonalds