A to Z of Balconies – Quarteira in Portugal. 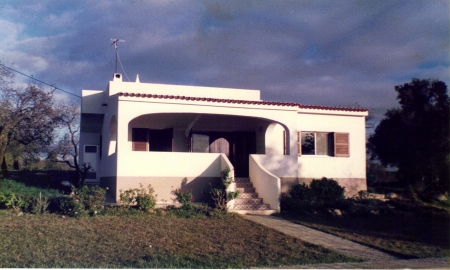 In the 1980’s my brother Richard worked in a car sales garage in Rugby for a man called Gordon Pitcher who owned a villa on the Algarve in Portugal that he used to rent out for holiday lets.

The property was in what was then a rather remote location called Quarteira, included in the deal was the use of a car for getting about.  Quarteira is now an adjacent resort to busy Vilamoura.  I visited Vilamoura again in 2019 but I didn’t like it. The official guide boasts that “Vilamoura is unlike any other Portuguese town, gone is the dilapidated charm, replaced with striking perfection, which is simply expected by the super-rich who frequent the marina.”

It is a modern purpose built tourist resort completely lacking in any sort of character.  We prefer ‘dilapidated charm’ and are certainly not ‘super-rich’ so stayed no longer than half-an-hour before quickly leaving without a single glance in the rear-view mirror.  I should have carried out better research.

Anyway, back to the story of the balcony, Gordon was a businessman who didn’t like unnecessary expenditure so as the car was UK registered he had to remove it from Portugal by a certain time each year so that he didn’t have to pay local vehicle tax and insurance.

Late in 1986 he asked Richard if he would do the job for him in return for a few days rent free holiday at the villa and Richard agreed so long as he could take his pals along to help with the long drive back.

This was Villa Estrella and its balcony. 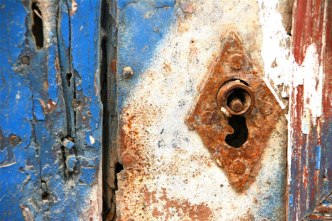 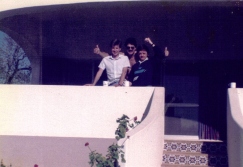 After the upsetting incident with the Guardia Civil we were so relieved to be leaving Spain that we stopped for a short while at the border on the French side and bought some doughnuts for breakfast but when we opened the cellophane packets they turned out to be past their sell-by date and starting to go mouldy so they had to go straight in the bin.

Except for Anthony who declared himself so hungry that he could eat his own arm so he just nibbled carefully as close as he dared (which was alarmingly close in my opinion) around the green bits.

So much for French haute cuisine!

At last we were in France and now we did some serious non-stop driving to try and catch up time.  We were short of cash so avoided the motorways but this didn’t hold us up at all because the French Autoroutes are of a really high standard and as this was Saturday the traffic was very light.

The sun was out now and the first stretch was through the last of the Pyrenees.  Anthony was driving and this presented the next problem.  He had very bad eyesight and wore reactalite lenses, which were fine on the open road but presented a real issue when they responded only very slowly indeed to the changed conditions when we went through tunnels cut through the mountains, and this presented a few moments of sheer panic when he repeatedly insisted on telling us that he couldn’t see where he was going!.

We simply didn’t stop as we drove progressively north.  First we passed Bordeaux, which we were delighted to discover had a by-pass and then Angouléme and then Poitiers.  This was like the Le Mans 24-hour endurance race and we kept switching drivers at regular intervals while others slept to be ready for their turn.  And as we drove north the weather deteriorated and we left the sun behind and the sky became overcast and cloudy.

We just kept going and going and going and then, when we reached the city of Tours, we could go no further so we pulled into a motel on the southern outskirts, booked in, went to our rooms and rested for a while on comfortable beds and clean linen.  It was heaven.

Next to the motel was a fast food diner and the others would have been happy to eat there but I couldn’t handle the shame associated with dining in such a place when I was in France so I argued my case for something local and the others finally gave in.  Somewhere just out of town we found a restaurant that looked suitably Gallic so we parked the car and went in.

It was a strange place that had only one option, which was raw beef and boiled potatoes but we were too tired to change our minds so we agreed to eat there.  The beef was being cooked over a thirty watt light bulb but the trick was to pick up a scalding plate and when the thin slices were cut and handed over the heat in the ceramic would complete the cooking process.  Actually it was delicious and we all went back for a couple of second helpings.

After our meal we sat chatting and looking back on the journey and a Rastafarian French student enquired if we had a cigarette, we said no and apologised and he tutted and shrugged his shoulders disapprovingly in that very French sort of way, threw out his arms in disgust and went to the cigarette machine to buy his own.  He went back to his table and sulked in a Charles de Gaulle sort of way and I noticed that he didn’t offer us one even though he must have known that we were non-smokers and would surely say ‘non merci’.

We had done really well today and we had driven nearly a thousand kilometres and now we were only four hours behind schedule, we had caught up a huge amount of time but now we were really, really worn out with travel fatigue so we were all glad to get back to the motel for a well-earned good nights sleep.

In the 1980’s my brother Richard worked in a car sales garage in Rugby for a man called Gordon Pitcher who owned a villa on the Algarve in Portugal that he used to rent out for holiday lets and, as the property was in rather a remote location, included in the deal was the use of a car for getting about.

Gordon was a businessman who didn’t like unnecessary expenditure so as the car was UK registered he had to remove it from Portugal by a certain time each year so that he didn’t have to pay local vehicle tax and insurance.

Late in 1986 he asked Richard if he would do the job for him in return for a few days rent free holiday at the villa and Richard agreed so long as he could take his pals along to help with the long drive back.  So in October we made the arrangements and one Monday in November Richard, myself and our two friends Anthony and Tony flew from East Midlands Airport on a cold wet morning and arrived two hours later in the sunshine at Faro.

It was about twenty miles to the villa so we found a taxi, negotiated a price and set off.  Unfortunately the taxi driver wasn’t fully familiar with this particular part of the Algarve and he didn’t find Richard’s hand drawn location map especially helpful either so there was some confusion about locating the destination, which he only found at about the third or fourth attempt.

This was understandable because Villa Estrella was set back off the road with an entrance that was hard to spot and after that there was a short dusty track that led up past the swimming pool and around the back of the property to the car park and the entrance.  And that was when we first saw the car that it was our responsibility to get back to the UK.

A  mixture of shock and panic set in when we realised that this was a ten year old automatic Ford Escort, which, it has to be said was not altogether in the best shape and with its best performance motoring years a long way in the past.

Under the streaks of grime and dust it was a curious lime green sort of colour that was badly faded by the hot Iberian sun and with various minor dents and scratches and missing wheel trims that made the poor thing look rather sad and forlorn and quite frankly a more suitable candidate for a trip to the scrap yard than a demanding two thousand kilometre journey all the way back to the United Kingdom!

Thankfully the villa was in much better shape than the car and inside there were comfortable furnishings, a well-equipped kitchen and a sunny balcony overlooking the garden and the pool and a fragrant orange grove next door.  It was a neat whitewashed house with a red tiled roof and brown shuttered windows and set in a slightly neglected garden with wild geraniums.  We selected our rooms, changed into holiday mood, settled in and then all agreed that we needed alcohol supplies so we locked up and walked down the track and down the road a short way to the village shop that we had passed three times on the way in. 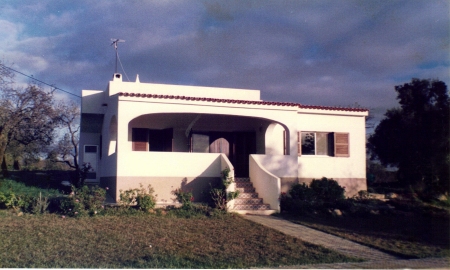 This was one of those fabulous old-fashioned shops that you used to find all over Southern Europe but sadly rarely exist any more due to the relentless march of the supermarkets that has swept them all away.  I have never been back but I expect this little shop will be long gone and is now a Spar or a Pingo Doce.

In fact we wouldn’t have known that this was a shop at all except for a tatty blue canopy advertising Portuguese Sumol soft drinks and a reference to Mercado Braz A Taverna that was flapping over a single door that gave access to the mini-market.

Inside it was dark and gloomy and we all needed a moment or two to let the eyes adjust to the light.  The place was chaotic and everything was piled on the shelves in a completely sort of mad way that made shopping a very random experience indeed.  Vegetables, washing powders, dairy products, dried meats all thrown together in a most confusing manner that made it difficult to find the things we were looking for which to be honest was mostly beer!