Extremadura is considered to be the traditional boundary between Moorish and Christian Spain and Mérida itself has previously passed between Christian, Moorish, and even Portuguese control.  Because of its rich and varied history it was declared a UNESCO World heritage site in 1993.

Istria 2011, The Roman Amphitheatre at Pula

The first century amphitheatre is the most important and most impressive building in Pula because it is the sixth largest in the world and one of the best preserved examples of its kind.

The Coliseum in Rome was the biggest Roman amphitheatre and could seat a massive fifty-thousand spectators (Some estimates suggest eighty thousand but generally about fifty thousand is the agreed capacity of the stadium), the second largest was Capua, also in Italy but now sadly in ruin, which had only a slightly smaller capacity, and the third was in El Djem in Tunisia with a capacity of thirty-five thousand.

After a leisurely lunch at the Orfej where the staff seemed genuinely pleased to see us again and where we would surely soon qualify for a discount loyalty card, we walked back through the quietly relaxing streets with their laid back atmosphere and we made our way to what was the only remaining site to visit, the Castle Museum which was inside the star shaped fourteenth century Venetian castle that had been upgraded by the Austro-Hungarians as a look out tower to watch over the port and the fleet in the bay below.

Pula, The Shipyard and the City 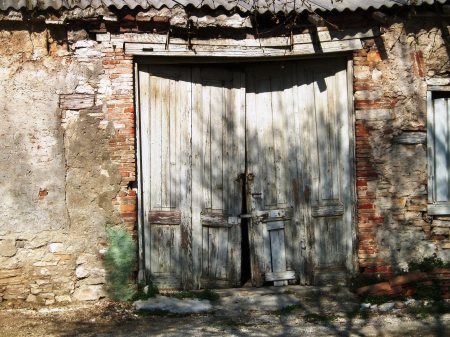 Kim had determined the itinerary for today and had plotted a pleasant stroll to the coast with navigational assistance that was optimistically restricted to an aerial photograph on a tourist information pamphlet.  From the outset this looked rather challenging and an ordinance survey map would have been far more helpful but we decided to trust to a natural sense of direction and we set off on our chosen route.

A week or two after returning from Riga there had been a very minor snow fall over the south of England, certainly no more than a flake or two, but predictably this had resulted in total travel chaos and the motorways and the airports had been brought to a ridiculous standstill.  I had contrasted this with the heavy snowfall in Riga on the day that we arrived that had been dealt with quickly, efficiently and caused no disruption to transport arrangements at all.