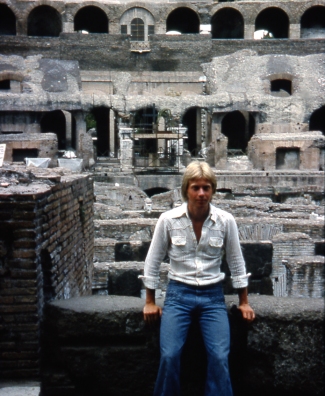 It was about a two hundred and fifty kilometre drive to Rome which took just over three hours and with a full day to pack in the coach picked us up before breakfast so we collected food parcels and set off for the Italian capital, which is the third most visited European city after London and Paris.  The coach took the road towards Naples and then swung around the base of Vesuvius and picked up the A1 Autostrada that runs all the way from Naples to Rome and then on to Milan.

It was still early morning as we carved through the flat agricultural landscape of Campania, past the vineyards, the olive groves and the citrus orchards and on towards the region of Lazio in central Italy.  Somewhere north of Naples the motorway picked up the route of the Roman road, the Appian Way and as we might have expected the road simply rolled out in a long strait Roman line.  We passed the city of Capua that once had the second largest Roman amphitheatre before it was demolished by invading armies and it was where Spartacus fought as a gladiator and where he was eventually crucified nearby after leading his insurrection of the slaves.  The road continued over the Pontine Marshes that by all accounts were once a dreadful place until they were drained and reclaimed by Mussolini and then the route became less monotonous as we reached the Alban Hills and then began our final approach into Rome where we arrived in the mid morning as the sun was shining and the city was beginning to heat up.

The coach dropped us off near the site of the ancient city and I was immediately overawed by my first sight of the Colosseum.  I had studied history for the last six years but this was the first time that I had visited any of the exciting places that I had delighted in reading about.  Our first stop in Rome was the Colosseum itself which, two thousand years before, had been the largest amphitheatre ever built in the Roman Empire and was capable of seating sixty-thousand spectators at gladiatorial combat events.  I was stunned by the size and magnificence of the place and even though there are substantial parts of it now missing I found the scale of the place simply breathtaking. 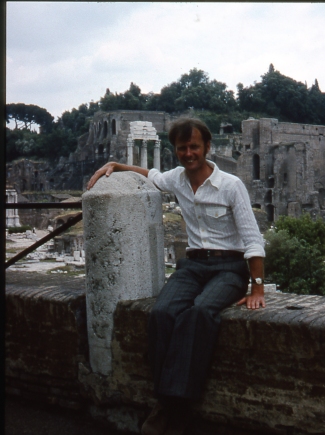 And because there were so many things to see so was the pace of our sightseeing and after the Colosseum we passed by the Arch of Constantine and joined an official city guide who took us through the south entrance and into the old Roman Forum and walked on old Roman roads past the spot of Julius Ceaser’s murder and the sites of the Senate and other civic buildings.  To the west was the Palace of Augustus and over the Via Dei Fori Imperialli to the east was Trajan’s Market and his personal column in his memory and after an hour or so we left the Forum by the north entrance after passing through the Arch of Septimius Severus.

In just a little over ninety minutes we had covered about a thousand years of history and as we passed by the Victor Emmanuel National Monument erected to commemorate the nineteenth century unification of Italy we walked along Via Del Corso and into the areas that were predominantly Renaissance and Baroque in architectural character.  Rome was of the few major European cities that escaped World-War-Two relatively unscathed and so most of the buildings and monuments are completely original.  We visited the Spanish Steps and saw the house where John Keats died and then the famous Trevi Fountain where thirty years ago people were still allowed to sit on the monument and cool their feet off in the water but that has been stopped now.

We visited the Pantheon, which is one of the best preserved ancient Roman buildings, originally built as a pagan temple but later converted into a Christian Church and is the burial place of the ex kings of Italy and other important Italians like the artist Raphael.  Next it was the Baroque Piazza Navona and it was all becoming a bit overwhelming.

By mid afternoon when we crossed the River Tiber over the Ponte Vittorio Emanuele II we had completed the ancient, the medieval, and the modern and now it was time to do the religious.

Rome is the most important holy city in Christendom and St Peter’s Basilica at the heart of the Vatican City is the headquarters of the Catholic Church.   We walked past the Castel Sant’Angelo and into the busy square outside the Basilica where a long queue of people snaked forever around the perimeter waiting for their turn to go inside.  Joining the back of it we were pleased to find that it moved quite quickly towards the main doors and soon we were inside the biggest and the tallest church in the World that has room for sixty-thousand worshippers at one sitting.  It was busy inside but not uncomfortable and we soaked up the information from the guide’s commentary as we passed by chapels with precious holy relics, the tombs of dead Popes and rooms with glass cases full of religious artifacts.

After a final look around the outside of the Basilica we concluded that we were unlikely to see Pope Paul VI today, most likely because at seventy-nine years old he probably liked a lie down in the afternoon, so we left St Peter’s to return to the coach.  Before leaving the city the driver did a whistle stop drive around some of the sights that we had missed earlier in the day including the window from where the dictator Mussolini used to deliver his animated speeches.

We had been in the city for about eight hours which was a long day but simply not long enough to see everything that we wanted to and I knew that one day I would come back and spend more time there but I had to wait nearly thirty years before I achieved that ambition.  On the way back, shortly out of the city, we stopped at a pasta restaurant for early evening meal of authentic pizza and jugs of cheap Italian wine. 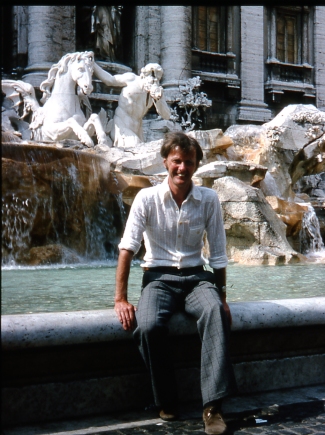 The Roman Ruins at Segóbriga

Covering 2,000 years of history in two days in sun drenched Rome the holiday club visit the Eternal City during the 150 year celebrations of the unification of Italy.

In the grip of an unexpected heat wave while the Romans seek out shade Andrew, Kim, Micky, Sue and Christine do what the English do best and go out in the midday sun to see ancient, medieval and modern Rome. 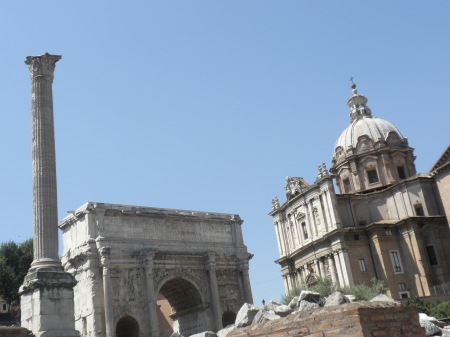 The tour began from outside the Colosseum and went first past the Arch of Constantine where Silvio explained that this was the only Roman monument that still had its marble reliefs intact because successive Christian regimes in Rome after the fall of the Empire were reluctant to destroy a monument commemorating the first Christian Emperor.  And then we made our way into the Forum and began to climb towards the top of the Palatine Hill stopping frequently to listen to and absorb more information from Silvio. 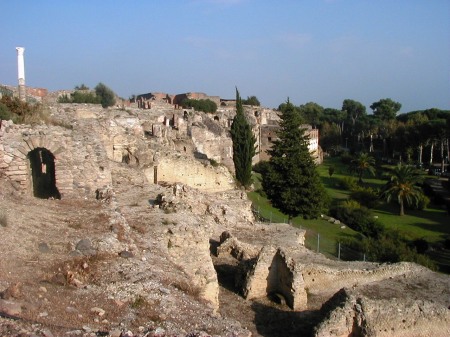 Pompeii, along with nearby Herculaneum, was completely buried and destroyed, during a catastrophic eruption of Mount Vesuvius over two days beginning on 24th  August 79.

The volcano buried the City under a layer of ash and pumice many metres deep and it was lost for nearly one thousand seven hundred years before its accidental rediscovery in 1748.  Since then, its excavation has provided a detailed insight into the life of a city at the height of the Roman Empire and which at the time of the eruption is estimated to have had approximately twenty thousand inhabitants and was located in an area in which many wealthy Romans had their holiday villas.

Sorrento, Gladiators and Cardinals, a day in Rome 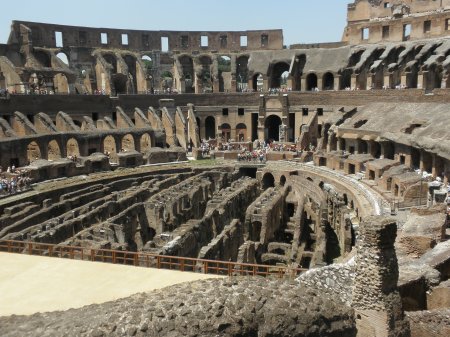 It was about a two hundred and fifty kilometre drive to Rome which took just over three hours and with a full day to pack in the coach picked us up before breakfast so we collected food parcels and set of for the Italian capital, which is the third most visited European city after London and Paris.  The coach took the road towards Naples and then swung around the base of Vesuvius and picked up the A1 Autostrada that runs all the way from Naples to Rome and then on to Milan.