The Red Tower, or to give it its proper name St Agatha’s Tower, is a large imposing watchtower in Mellieħa,  the sixth and most important of a coastal defence system of fortifications and small castles built by the Knights of St John during the seventeenth and eighteenth centuries.

St. Agatha’s Tower turns out to be the last large bastioned tower to be built in Malta to provide early warning of attack and to alert the defence of the city of Valletta.

The city of Valletta was built by the Knights of St John who were granted the island in 1530, seven years after being expelled from Rhodes by the Ottoman Turks.  Trouble with Turks however continued to follow the Knights and in 1565 the Ottomans laid siege to their new home on Malta with the intention of establishing a base from where they could conveniently advance into Europe.

But as in Rhodes and at Bodrum the Knights proved a tough nut to crack and the Great Siege of Malta which lasted from May until September ended with the defeat and retreat of the Turkish army.

The rest of Europe was so grateful for this stoic resistance that it began to provide funding for the Grand Master of the Order, Jean Parisot de Valette, to plan and construct a new fortified city that was to be called Valletta in his honour.  Although it was designed principally as a fortress city with great battlements and armed bastions the architects also found time and paid attention to good design and within the walls they built a Baroque style city with churches, palaces and fine mansions, laid down gardens and designed grand plazas at the intersections of the grid pattern of the streets.  It was certainly worth protecting.

Saint Agatha’s Tower was built between November 1647 and April 1649 and consists of a square castle with four corner towers.  Cannon ports in the turrets gave interlocking fields of fire commanding the base of the walls and the gateway, with other large artillery ports in the faces of the main tower.

The tower is situated in a commanding position on the crest of Marfa Ridge at the north west end of Malta, overlooking the natural harbour and potential enemy landing site of Mellieħa Bay, with clear views over to Comino and Gozo, and also eastward to the line of watchtowers along the north shore of Malta that linked it with the Knights headquarters in Valletta. It was the primary stronghold in the west of Malta, and was manned by a garrison of thirty men, with ammunition and supplies to withstand a siege of forty days.

Although the children would have preferred to stay at the hotel and spend all day in the swimming pool I thought it was important for them to get out a little and learn something about Malta.  The girls weren’t too keen and Patsy (the clever one) feigned a stomach ache to get out of it, Molly (not so clever) didn’t think fast enough to find an excuse but William is rather fond of forts and castles so luckily he was enthusiastic about the visit.  Molly was dragged along complaining.

It was just a short walk but it was all uphill so, in the heat, it did become rather a drag by the time we reached the steep flight of steps which took us to the entrance.

There are some good displays inside and some imaginative reconstructions but the best bit is the climb to the roof and the reward of sweeping views in all directions as far as Victoria on Gozo to the north and Valletta to the south and it was easy to understand why they chose this spot for the tower – no one was going to slip in unnoticed that’s for sure.

It didn’t take long to see all that there was to see and with the promise of an ice cream down at the beach after the stroll back there were a lot less complaints on the return walk. 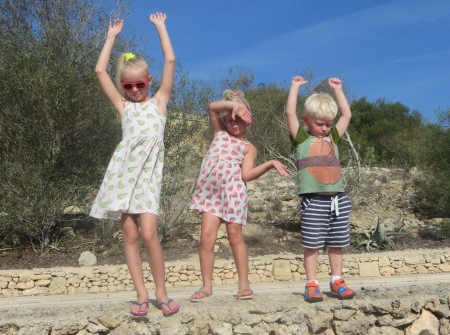