“The town of Merthyr Tidfil was filled with such unguided, hard-worked, fierce, and miserable-looking sons of Adam I never saw before. Ah me! It is like a vision of Hell, and will never leave me, that of these poor creatures broiling, all in sweat and dirt, amid their furnaces, pits, and rolling mills” – Thomas Carlyle

The Rhondda Valleys are punctuated at regular intervals with old mining villages and towns, the pits all gone now of course, for better or for worse, depending upon your point of view and as we drove north we climbed through Treorchy and Treherbert.

If Port Talbot is known for actors then Treorchy is sort of famous for footballers being the birthplace of three Welsh internationals, Noel Kinsey, Wayne Jones and Geraint Williams as well as the World Cup referee Clive Thomas.  I can’t find evidence of anyone famous who came from Treherbert  except my Landlady Vi Elliott from my University years in Cardiff and she was a very fine host.

Travelling North, Treherbert is the last of the villages in Rhondda Fawr and shortly out of the town the road eased its way around the top of the valley and provided us with a succession of stopping places where we could pull-up and simply admire the jaw-dropping views.  At one stop there was a curious collection of memorial stones and crosses and we finally deduced that it was a sort of do-it-yourself graveyard where people have their ashes buried or spread in a place with an eternal memorable view over the Brecon Beacons.

Rather odd I thought.  There must be tens of thousands of places in South Wales with equally grand views where people could have their ashes spread, why not find somewhere unique and solitary? I wouldn’t want to spend eternity with a bunch of strangers  but for some reason a hundred or so had come together in exactly the same spot next to a high pressure gas pipe line with a functional concrete sign in bright orange that I suppose is there to warn family not to dig too deep or else they may be all prematurely scattered together!

From this elevated position it reminded me that only six months previously I had enjoyed equally spectacular views from the top of the gorge at Ronda in Spain.  Two Rhonddas  in the same year!

Leaving the valley we reached the A465 which is a road not just with a number but also a name – The Heads of the Valleys Road, so-called because like a curtain pole it joins together the northern ends (or ‘heads‘) of the South Wales Valleys and now we drove west towards Merthyr Tidfil and to the south of us the valleys were the folds in the drapes.  I like roads with names – The Great North Road, The Fosse Way, TheWatling Street, The Cat and Fiddle and the Brian Clough Way, so much more romantic than just a number.

During the Industrial Revolution Merthyr Tidfil was the principal town in South Wales, based on the industrial muscle of iron works and coal mining it was far more important than Cardiff, Swansea or Newport and my pal had brought me to tell me a story relating to its industrial heritage.

Not quite Merthyr Tidfil as it happens but a nearby village of Vaynor on the edge of the Brecon Beacons and we drove north towards a small village and a country churchyard where there is a grave of a famous industrialist – Robert Thompson Crawshay who was the last owner and manager of the Cyfarthfa Iron works and sometimes called the  ‘Iron King of Wales’.

During the 1870s there was considerable industrial unrest at Cyfarthfa as steel began to replace iron in value and importance and the business was badly affected by falling demand and prices.  Even as standards of living (such as they were, I imagine)  collapsed all around Crawshay refused to give way to the demands of the unions and one by one authorised the extinguishing of the furnaces.

A fact about foundries is that once an iron smelting furnace has been allowed to go cold there is no way of starting it up again, it is cracked, flawed and useless and as many as five thousand workers lost their jobs and fell into hopeless poverty as a consequence.

Anyway, the story goes that just a short time later he died a broken man and on his death-bed, racked with terminal guilt, he uttered his final words “God Forgive Me”.  This may or may not be true but what is fact that under a giant slab of granite said to weigh an estimated ten tonnes*, brought all the way from Cornwall in the South West of England lies the body of Robert Thompson Crawshay and inscribed in the stone is a simple inscription which records the name, the years of birth and death and his alleged final words “God Forgive Me”.

A churchyard somewhere in Norfolk.  Sandals with socks.  Not my dad but my Godfather Stan Gardiner and my sister Lindsay.  I assume that Dad took the picture.

To be honest I am not so keen on visiting graveyards as my friend.  I think this is because when I was a boy I remember family holidays where my dad always wanted to visit churches.  I believe that this had something to do with the fact that they were free to enter.  Dad would be disappointed to discover that today you can’t just wander freely  into churches anymore because generally they are kept locked as a result of vandalism and theft and if you really want to visit then you have to find the key holder and fill out a five-page application form.  It is harder to get into a country church now as a tourist than it is to get NHS treatment!

We left Vaynor and headed south now and my companion told me there was one more important place to visit today on our way back to the caravan park.  “Is it a churchyard..?”, I demanded to know “…because you know that I don’t like church yards!”.

He was suspiciously reticent about answering so I knew instinctively of course that it would be a churchyard! 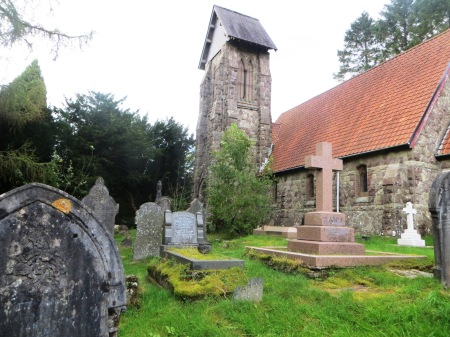 * so unpopular was Crayshaw with the local people who had lost their jobs that it is said to be deliberately so heavy so that his body could not be exhumed and desecrated!