On This Day – Truck Stop in Turkey 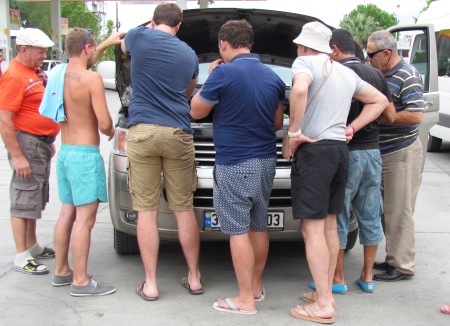 Hagi wasn’t in the AA roadside breakdown service or whatever the equivalent is in Turkey so there now followed a long winded debate as each of the passengers looked inside the engine compartment in turn as though they knew what they were talking about and offered alternative diagnoses and possible solutions.

There was a lot of head scratching, nodding and general agreement but the truth was however that there was no more engine technical knowledge between them than you could expect to find in an average reception class at a primary school and one by one the suggestions all inevitably failed.

Turkey, Stuck in a Truck 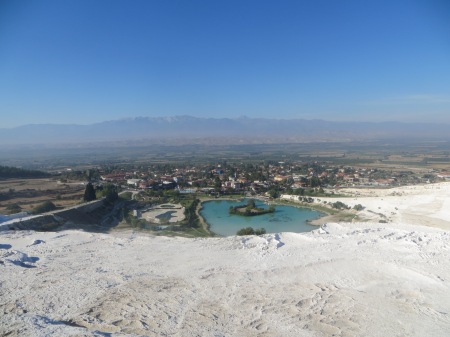 “Chance encounters with fellow travellers are one of the joys of any journey.” Michael Portillo

As we left Pamukkale shortly after one o’clock we rejoined the mini-bus and the car that had broken down this morning and we were relieved to hear it purring away like a contented kitten and then we drove down to the village for another lunch that was included in the cost of the excursion and which thankfully this time turned out to be moderately edible.

Hagi was clearly worried about the car and was quite unable to settle to his lunch and when we had finished he gathered us up with some haste and began the next leg of the journey.

Another unnecessary visit to a factory outlet, this time an Onyx workshop. We suggested that in view of the mechanical problems that we (the passengers) really wouldn’t mind if he missed it out and just made a priority of getting back to Altinkum but he said that he couldn’t do that because he had a contract with the factory and if he didn’t turn up then they would break his legs and kidnap his children but personally I was sure that they would have understood.

The pointless Onyx factory visit over we started off in the direction of home with Haji driving as though he was playing an arcade racing driver game and quite quickly it was quite obvious that there were problems – multiple electrical problems as it happened and the dashboard lit up like a Christmas tree and warning indicators kept pinging and beeping and then after only five miles or so the engine began to lose power altogether and Haji was lucky to make it to a service station where it broke down completely.  It now seemed that there was a price to pay for the ‘ice bucket challenge’ engine washing service on the day before.

Hagi wasn’t in the AA roadside breakdown service or whatever the equivalent is in Turkey so there now followed a long winded debate as each of the passengers looked inside the engine compartment in turn as though they knew what they were talking about and offered alternative diagnoses and possible solutions.

There was a lot of head scratching, nodding and general agreement but the truth was however that there was no more engine technical knowledge between them than you could expect to find in an average reception class at a primary school and one by one the suggestions all inevitably failed.

Except that is for one man, a Lithuanian, who on a scale of one to a hundred would possibly have reached maybe about four or five in a mechanical knowledge test.  To be fair however, it was his suggestion that got the thing going again – push it and bump start it and then with the engine ticking over again he let himself down by suggesting that we remove the battery and just be careful not to stall it.  When asked for an explanation he said “it is not a problem, you can drive without a battery, I once drove from Nottingham to Newcastle without a battery”.  This piece of information was so far off the bizarre scale that everyone just looked at him in amazement but no one had the courage or the time available to ask him to explain.

I am well aware that my mechanical knowledge is restricted to tyre kicking so I stood well back and tried to make myself anonymous when the car pushing duties began. 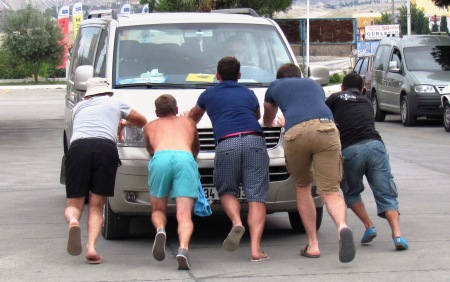 Anyway, the important thing was that by a minor automobile miracle the car was working again now so with some trepidation we got back into the vehicle and carried on the journey.  We had a different driver now who seemed to know how to treat the ailing motor and he coaxed it along for sixty miles until we reached Aydin and the service station café stop and, in our opinion, he rather foolishly pulled in for a twenty minute break that no one really needed.  Perhaps he was going to find the man who flooded the engine yesterday and punch him on the nose?

And it was foolish, because when it was time to carry on the car wouldn’t start again which involved more mechanical debate and more pushing and shoving until it reluctantly coughed and complained into some sort of spluttering life.

The really bad news was that Haji now resumed driving duties and there was a collective groan from the passengers as we set off and he started to fiddle constantly with the controls.  One by one the dashboard lights started to come on again and the warning sounds started to sound and not far out of Aydin and still an hour or so from home the vehicle came to a terminal halt at the side of the road close to a spot that had been thoughtfully provided by the motorway planners for people who want to discard large numbers of worn out tyres, old mattresses and the remnants of demolished bathrooms.

Things looked bad but never mind we thought, the mini-bus was just behind us so surely we could all fit inside that for the final part of the journey.  And then things got really bad because Haji received a phone call with the awful news that the mini-bus had broken down as well and having lost all of its engine oil wouldn’t be going any further at all today.

So we were stuck on the motorway hard shoulder with Paul and Laura and Joe and Katrina and without any breakdown assistance we worried about how we might get back home tonight.  We didn’t know these people with whom we shared our predicament and this made me think that meeting new people like this is rather like being on the sea shore like pebbles which are constantly rearranged by the waves – you just get temporarily acquainted and then you are moved on.

Luckily Kim and I were moved on quite quickly because an opportunist driver in a rescue bus had spotted the broken down vehicle behind us and negotiated an extortionately expensive deal with Haji to take as many people back as possible.  The bus was full but there was room for just two more so we were allocated the places and we were reacquainted with the noisy Lithuanians and the singing darts team.

We couldn’t wait to get back home but had to endure a final ninety minutes of travel with a level of comfort that you might reasonably expect if you were being transferred between high security prisons before finally getting back to the apartment.

The lesson learned from this disastrous journey is this – if you go to Altinkum and are tempted to take an excursion take my advice and steer well clear of IMX Travel – and I haven’t even told you about the IMX boat trip to Bodrum yet but that story is coming up soon and without giving anything away, that was another potential disaster!

The name of this tour I forgot to mention – It was called the Double Delight and nothing in my travel experience has ever been so misleadingly advertised! 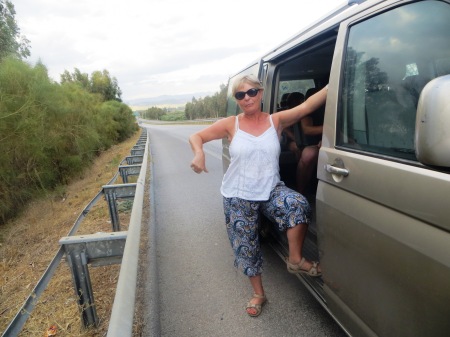