A Picture Tour of Corfu Town 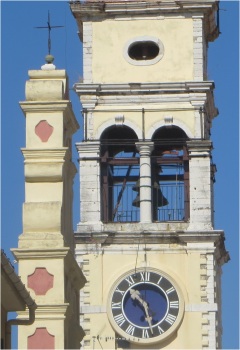 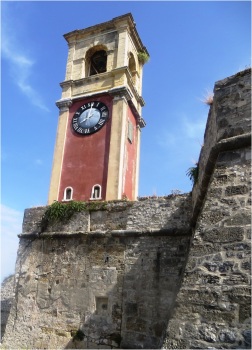 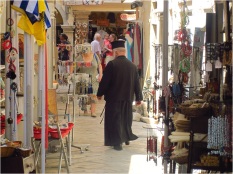 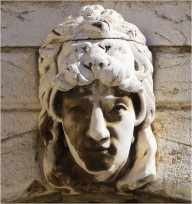 Corfu, My Family and Other Disasters – Corfu Town

“The architecture of the town is Venetian; the houses above the old port are built up elegantly into slim tiers with narrow alleys and colonnades running between them; red, yellow, pink, umber – a jumble of pastel shades which the moonlight transforms into a dazzling white city…” –  Lawrence Durrell, ‘Prospero’s Cell’

Travelling to Corfu town by speed boat seemed a much preferable option than taking the long tedious journey by bus all around the bay because even though it was rather expensive (€19 each but children free) it only took twenty minutes.

The boat bounced over the gentle waves and we looked unsuccessfully for dolphins as the direct route to Corfu town bypassed all of the holiday resorts that punctuate the horseshoe bay and then we passed the monstrous cruise ships in the harbour and shortly after that disembarked at a small jetty quite close to the old fortress.

No one can really accuse Corfu town of being picturesque (that’s just my opinion) and it is an odd mix of busy streets and unappealing modern buildings and this is because sadly a lot of the town was destroyed in the Second-World-War when the Luftwaffe bombed Corfu as they grasped control from the Italians following Italy’s surrender to the Allies.  No one has gotten around to restoring the place to its former glory and sadly it is doubtful that they ever will.  Time marches on!

The old town of Corfu with its pastel-hued, multi-storey Venetian styled shuttered buildings, peaceful squares and graceful arcades was designated a UNESCO World Heritage site in 2007 and stands on the broad part of a peninsula at the end of which the old Venetian citadel is cut off by a natural gully with a seawater moat.  To begin with we walked in the opposite direction along Arseniou, the old coastal road with the sea on one side and the elegant buildings on the other. 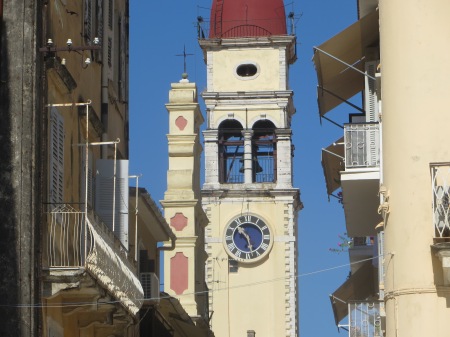 History has left the Ionian isles with a fascinating cultural legacy, the result of Corinthian, Byzantine, Venetian, French and British influences that extend from architecture to cuisine and Corfu Town boasts the stateliest of Neoclassical buildings a legacy of the nineteenth century British Protectorate of the Ionian islands.

During two short spells of Napoleonic occupation, the French left their mark as well. This influence is best seen in the town’s arcaded Liston, a recreation of the Rue de Rivoli in Paris and a sun-drenched venue for sipping coffee and people-watching. It runs alongside the town’s huge grassy open space, the Spianada and before  all of this, the Venetians bequeathed all of the Ionian islands a distinctive landscape of Italianate buildings.

The overall impression is that of a cosmopolitan and Italianate city so we picked out our photo opportunities carefully concentrating on the stylish mansions courtesy of the Venetians, the large public buildings and parks left there by the British and the esplanade thanks to the French and all looking faded, sun damaged and dilapidated but all splendidly elegant.

Eventually we found a café that we liked and stopped for ice cream and a drink before continuing our walk through the cobblestone streets and up and down the steep steps which sucked us towards the very centre.  Having been developed within the confines of the fortifications the old town is a warren of narrow streets, which, as we walked through them were often hard work as they followed the gentle irregularities of the ground and corkscrewed through narrow alleys.

Emerging from the shady streets back into the sunshine we passed the Esplanade, once the exclusive place for nobles and important residents and the cricket pitch, which looked lush and green and rather out of place.  It is a quirky legacy of fifty years of British rule from 1814 to 1864 and where matches are still played today on a pitch with a precariously short boundary if you have parked your car near by and if Ian Botham or Viv Richards were batting!

I don’t suppose many people would expect to find cricket being played in Greece but it was introduced in Corfu in April 1823 when a match was played between the British Navy and the local Army garrison.

The Hellenic Cricket Federation was founded a hundred and seventy years later in 1996 when Greece became a member of the European Cricket Council and an affiliate member of the International Cricket Council.  There are now twenty-one cricket clubs in Greece, thirteen of which are based in Corfu and Greece competes annually in the European Cricket Championship despite being banned for a year in 2008 for cheating. 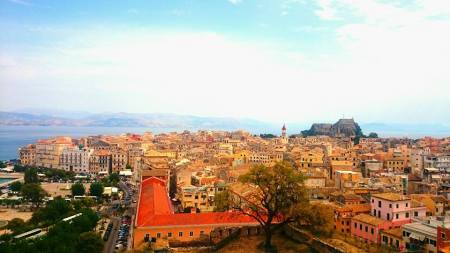 I liked Corfu town, it is untidy and noisy but it has a friendly and familiar feel, rather like an old pair of shoes or a favourite holiday tee shirt that is both reliable and comfortable.  Four hours wandering around the town had passed surprisingly quickly and soon it was time to run the gauntlet of the pesky waiters trying to draw customers into the restaurants and return to the harbour for the return journey.

These men are masters of persuasion and can intercept people who have no immediate plans to stop for a drink or food and have them sitting down with a menu card in their hand in the bat of an eye lid and before they can fully understand what has happened to them.

The best man I ever saw at this was on the Greek island of Kalymnos.  I watched him working the pavement because he was a genius.  He had an infectious smile that he probably practised to perfection every morning in a mirror and he had the ability to make people stop and sit at a table and order drinks as though he could manipulate their minds and thoughts.  He stood back in the shadows waiting for his opportunity and then with a predatory sixth sense and a perfect awareness of potential customers as they passed by he stepped forward and pounced and was almost always successful.  It was a pleasure to watch him work and when we left I told him so and congratulated him on his skills.