Travels in Spain, A Walking Tour of Madrid

“To go to bed at night in Madrid marks you as a little queer. For a long time your friends will be a little uncomfortable about it. Nobody goes to bed in Madrid until they have killed the night.” – Ernest Hemingway

According to official statistics, after London, Paris, Rome and Barcelona, Madrid is the fifth most visited city in Europe (in that order) but I wasn’t quite sure what to expect.  Compared to London, Paris and Rome it only achieved capital status relatively recently, and there is no iconic building to define it, no Eiffel Tower, no Colosseum and no Westminster Abbey and no famous cathedral or castle either so I was curious about what we were likely to see.  Hemingway liked it so I was sure that I would too.

On the first day we could have taken the option of a city bus tour but I really do dislike them with most of the time spent in long lines of slow moving traffic or at red lights with nothing much to see and then flashing past places of interest with only a split second photo opportunity, so on our first day we decided to take a ‘free’ walking tour of the city.  I knew that it wouldn’t be ‘free’ of course but everyone else seemed to think that it was a good idea.

We joined the tour in the appropriately named Plaza de la Puerto Del Sol because the sun was blazing and in this wide open space the rays reflected off the buildings and the paving slabs and the temperature was rising steadily as we walked past the statues of King Charles III and the Bear and the Madroño tree, which we learned is the heraldic symbol of the city (top picture).

Interesting I thought as only a month previously I had been in the city of Berlin which also has a bear as a city symbol and I was also reminded now that as a boy I grew up in Warwickshire which has a County symbol of a Bear and an Old Rugged Staff.  I expect lots of towns and cities adopt the bear as their symbol.  In the USA California has one on its flag and the bear is of course the symbol of the country of Russia. 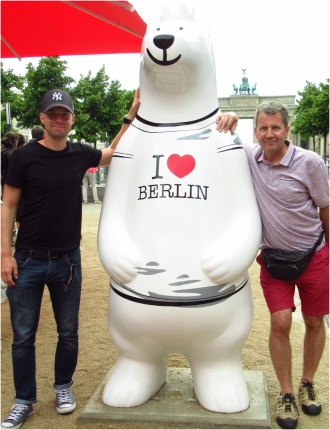 This is my old Boy Scout badge Warwickshire Bear … 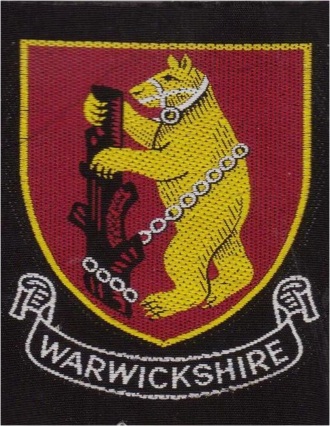 There have been no wild bears in England since William Shakespeare was a lad and none in Germany for nearly two hundred years but there are still some in Spain in Cantabria and Asturias in the north of the country.

The Plaza is the very centre of Madrid and the hub of the radial network of the city’s roads and from here we walked a few streets to the Plaza Mayor.

The Plaza Mayor is the original city square, impressive but not the largest in Spain because that honour belongs to Salamanca in Castilla y Leon.  In the centre stands a grand statue of King Philip III and this place has previously been a market, a bull ring and a place of gruesome public executions but now it is a large cobbled pedestrianised area, grand buildings, temporary exhibitions and pavement cafés all around the sides. We stayed for a while and then left to continue our tour.

The tour took us as far as the Palacio Real de Madrid, which with an area of one hundred and thirty-five square metres and over three thousand rooms is the biggest Palace in Europe and more than twice as big as Buckingham Palace in London.  It is larger even than Versailles in France (sorry Versailles). It is the official residence of the King of Spain but he doesn’t live there, probably because it must be a bugger to heat in the winter and it is only used for official State Ceremonies.  King Felipe VI and the Royal Family choose to live instead in the more modest Palacio de la Zarzuela on the outskirts of Madrid.

We decided that we would come back to the Palace later when the tour was finished.

We walked around the outside of the white stone Palace and admired the views over the royal gardens and then visited the adjacent Plaza de Orient a spacious and well laid out pedestrian area with an extravagant fountain and equestrian statue of Philip IV surrounded by immaculate gardens and lines of ugly face statues of former Kings celebrating the period of the Reconquesta.

The walking tour finished close by with a selling pitch for more tours and a fee, I just knew that it wouldn’t be ‘free’ but to be fair it had been very good and we enjoyed it and we happily handed over a contribution to the guide.

It was time for lunch so we thought it might be a good idea to sit in the Plaza Mayor but when we arrived there the prices were higher than we generally like to pay so we abandoned this idea and returned to the Plaza de la Puerto Del Sol and looked for a tapas bar.  We selected one in a side street and instead of tapas all decided that we should try the calamari sandwich which I personally hoped might be similar to a nice fish-finger sandwich.  When it came it wasn’t and we wished we hadn’t so we washed it down with a beer and returned to the streets.  It was so bad that I can honestly say that I would have rather had a McDonalds Filet-O-Fish!

Or, even better, an English Fish Finger sandwich…

What would you choose, Calamari Baguette, McDonalds Filet-O-Fish or a Fish Finger Sandwich? 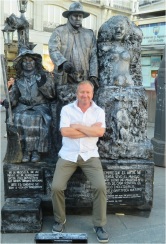 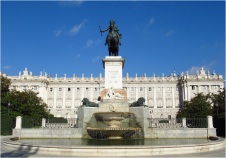 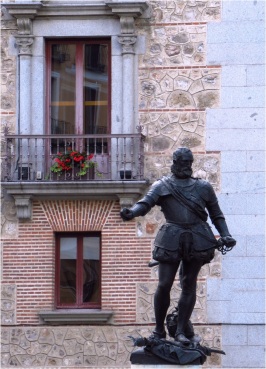 Some time ago I wrote a post about my favourite Plaza Mayors in Spain.  You can read that post here.