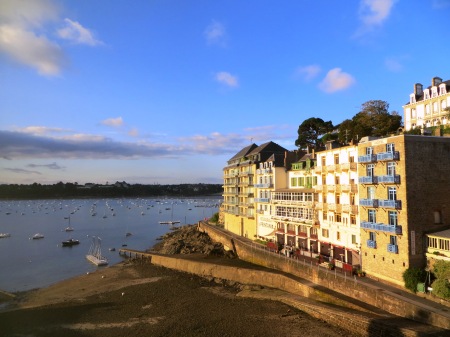 Our hotel had a perfect location right on the sea front and the price to be paid reflected that but sadly the breakfast didn’t match up.  Hard bread and selections that disappeared and weren’t replenished left us feeling mugged!  That’s the Hotel de Vallée by the way.

Never mind, the sun was shining, the disappointment was soon left behind and we set off for a walk around a coastal path until we reached a boat trip booking office and we immediately changed our plans – we were on holiday and impromptu decisions are quite acceptable.  So rather than explore the town of Dinard we bought tickets for a fifteen minute boat taxi ride to the city of St Malo instead.

The water taxi negotiated a busy route to avoid the boats bobbing about on the water and the up market yachts streaking across the surface of the sea and brought us closer to the medieval walled city.  Christine wasn’t impressed, she thought it looked like a prison with its imposing grey granite walls rising directly out of the sea but we persuaded her to hold her final judgement and wait until we got inside. 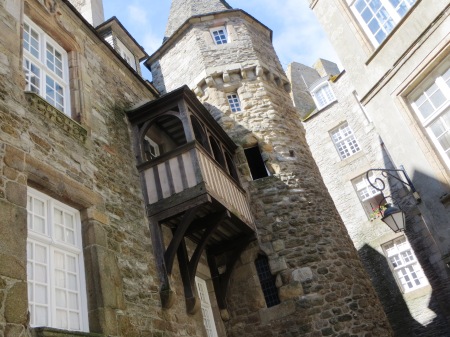 She was glad that she did because St Malo is an absolute gem.  In 1944 it was almost completely destroyed by American bombers and a British naval bombardment and by the time they had finished with it 80% was in ruins.  The French didn’t rush to restore it however and took twelve years from 1948 to 1960 to put the city back together again stone by stone, brick by brick.

And this is an important point – in France war damaged towns and cities were rebuilt in a traditional way with buildings that recreated the spirit of the old communities whereas in England our heritage was swept away by the town planners of the 1960s who approved the destruction of anything of value and replacement with concrete and ugliness which condemns English towns for the next couple of hundred years or so to all look the same whereas in France they have recaptured and preserved their individual identity.

In 2015 this seems to be a feature of our travel destinations – cities that have been bombed and destroyed.  In February we went to Warsaw in Poland, in April to Malta and to Londonderry in Northern Ireland in June all of which, have at some point been virtually destroyed.

We walked through the labyrinth of streets where shops and bars met at the pavement edge and walked straight through to the walls on the other side where restaurants lined the city walls, so many because it is estimated that St Malo has one of the highest concentrations of restaurants in all of Europe with most of them specialising in oysters from nearby Cancale.

Outside of the walls we walked to the sandy beaches and the rows and rows of timber trunks firmly planted in the sand to provide defence against Winter Atlantic storms that sweep in along this coast and frequently deluge the city under a barrage of high water.  Not today however because the sun was shining and if anything we had to frequently seek shelter of shade to get away from the blistering midday sun.

After walking for an hour or so we rested for a while at a bar in the sunshine and then walked some more just to make sure that we hadn’t missed anything.  First we arrived at the cathedral which was much like any other cathedral but had an interesting plaque outside commemorating a previous citizen of the city, a man called Jacques Cartier.  Now, this is a name that probably won’t mean a lot to most people unless they are Canadian because Jacques Cartier let me tell you is credited with being the explorer who first navigated inland from the North Atlantic Ocean and allegedly gave the country its name.  Lots of people had been to what we know as Canada before Cartier of course but none had ventured so far into the interior before him.

In 2004 the Canadian Broadcasting Company ran a competition to choose the greatest Canadian, when the votes were counted three of the top ten were Scots, Tommy Douglas, John MacDonald and Alexander Graham Bell but despite this achievement the Breton Jacques Cartier did not even make the final fifty.

St Malo was a genuine surprise, I had always thought of it as a ferry port where people arrived from Portsmouth and left the boat blinkered, looked for the green Toutes Directions sign and hammered south, perhaps they do, there weren’t many English tourists here today.

After the lunch stop we walked back to the walls and walked along the western bastions looking out over several island fortifications cut off by the high tide, one containing the tomb of François-René Chateaubriand, politician, diplomat, author and the man who it is popularly supposed that the steak dish is named after.

By late afternoon it was time to take the water taxi back to Dinard and by four o’clock we were back on the seaside promenade.  With the sun still beating down we walked to the beach with the lifeguard championship games and had a drink at the water’s edge before the girls went into town to the shops and to find somewhere for evening meal and I declined the opportunity to join them and had a second beer instead. 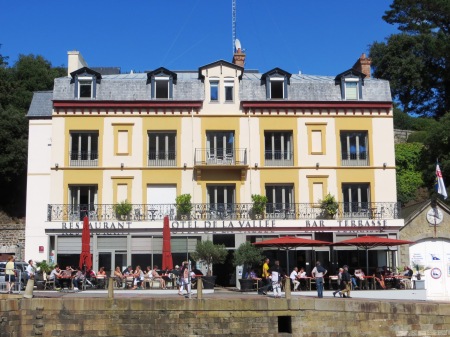